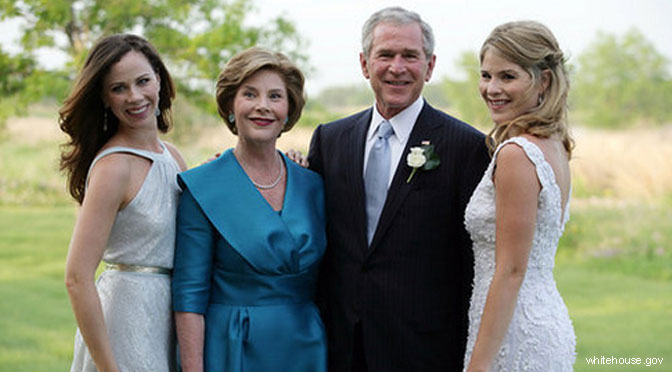 George W. Bush was a pro-life president, but one of his daughters just surprised many by praising Planned Parenthood.

In a piece over the weekend, the New York Times’ Phillip Galanes sat down with both Planned Parenthood CEO Cecile Richards and Barbara Bush (above, left), who runs a nonprofit called Global Health Corps.

GHC’s mission includes helping connect young people to positions in a wide range of fields worldwide, both within the health industry and various fields that support it. During the interview, Bush said:

It’s hard to know how you fit in if you’re not a doctor or nurse. If we can demystify that and create channels into Planned Parenthood and other exceptional organizations, then we’ll have an army of people working to solve health problems.

Planned Parenthood’s business is commonly equated with health care. However, the practice of abortion contradicts the Hippocratic Oath’s call to respect and preserve life, and even abortionists have admitted that mainstream health providers often stigmatize them. From 2009 to 2013, the organization’s actual health services such as prenatal care, breast cancer exams, and pap smears declined between 41% and 58%. The abortion giant’s claims to provide mammograms have also been debunked.

Planned Parenthood is also at the center of an ongoing scandal over breaking a variety of laws related to its sale of organs from aborted babies. Richards has made a variety of false claims in defense of her organization.

Barbara’s mother and grandmother, former First Ladies Laura Bush and the elder Barbara Bush, also diverged from the 43rd president’s position. The former wrote, “While cherishing life, I have always believed that abortion is a private decision, and there, no one can walk in anyone else’s shoes”; while the latter called abortion “a personal thing.”