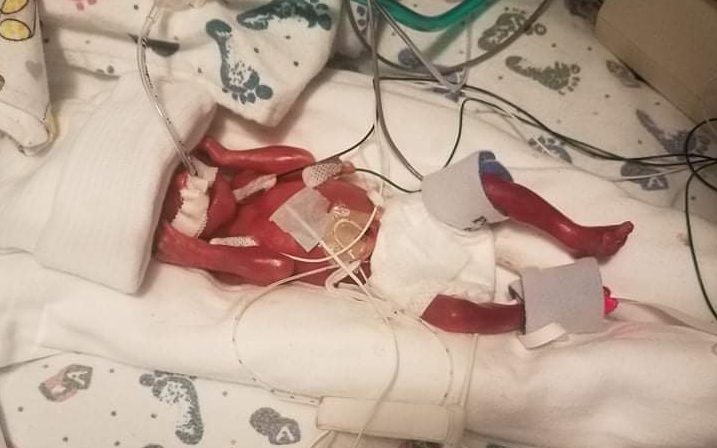 Jaden Wesley Morrow was born on July 11 at just 23 weeks and one day gestation. Born 17 weeks early, the baby boy weighed only 13 ounces, making him the smallest baby in 10 years to be born at Blank Children’s Hospital in Des Moines, Iowa, according to CBS affiliate KCCI Des Moines.

Jaden’s mother Ellonn Smartt had a feeling the baby was going to be born when she felt odd that day. Just 10 minutes after telling Jaden’s father Jordan Morrow about that feeling, her water broke.

She was rushed to the hospital where doctors performed an emergency C-section. Jaden was born a fighter — screaming and swinging his arms. Doctors called him “remarkable” and “a miracle baby.”

While Smartt still wonders what happened to cause preterm labor — she also has a 3-year-old son Elijah — she is nothing but thankful. “It taught me there’s always a plan, and we learned to be patient,” she said. “Jaden is here, and that’s all that matters.”

Jaden is currently in the NICU and will likely be there until his due date on November 6, according to the family’s GoFundMe page. On July 31, Jaden gave everyone a scare and his family prepared for the worst. Fluid in his abdomen pointed to the possibility that his kidneys and bowels were failing, damaged or dead. Doctors did exploratory surgery and found that Jaden didn’t have those concerns and though he’s “not ‘out of the woods’ yet” doctors remain hopeful and amazed. 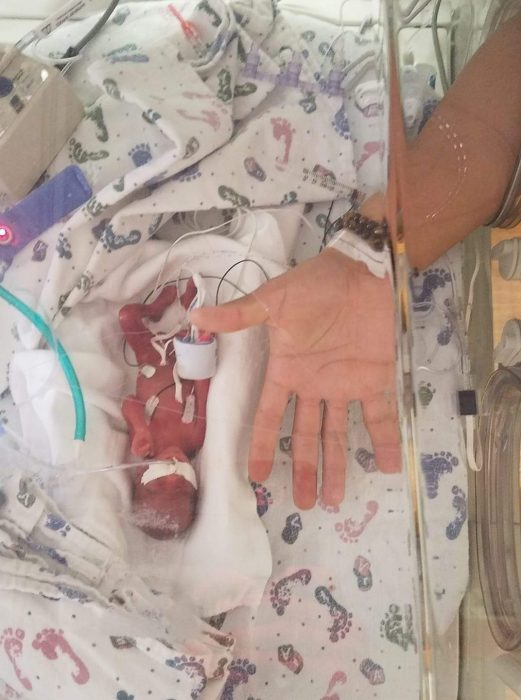 Jaden next to his father’s hand. Photo via Caring Bridge.

Children even younger than Jaden have survived and thrived after being born prematurely. Courtney Stensrud and her husband welcomed their daughter Lyla at just 21 weeks gestation. Born on July 11, 2014, she is now a healthy five-year-old. Eliora Schneider was born at just 21 weeks and six days weighing only 14 ounces and is now two years old. 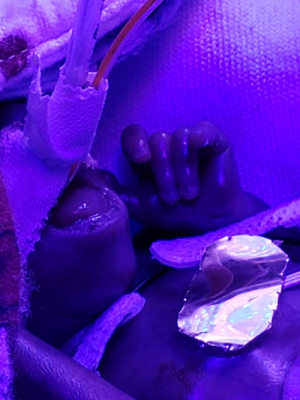 While KCCI reporter Sarah Muller made the false claim that babies at 23 weeks aren’t supposed to be fully formed or have use of their limbs (both of which were true back in the first trimester), babies at this age are actually considered viable. A 2015 study in the New England Journal of Medicine stated that “babies born at 22 weeks had a nearly 25 percent survival rate if actively treated in a hospital” pointing to 22 weeks as the new age of viability rather than 24 weeks. If a baby born at 22 weeks receives no care from medical staff, there is no chance of survival.

Abortion is still legal for any reason at 22 weeks gestation, despite the fact that babies are now considered viable at this age. In fact, babies have survived abortions and been left to die at and beyond 22 weeks. Some, however, have survived well beyond birth, because someone took pity on them and gave them medical care.

All babies deserve the chance to live and to be provided with the medical care that can help them survive. No one should be considered expendable at any stage of life. Jaden is helping to prove that life inside the womb is just that: life. Yet babies just like him are killed everyday in the name of choice.