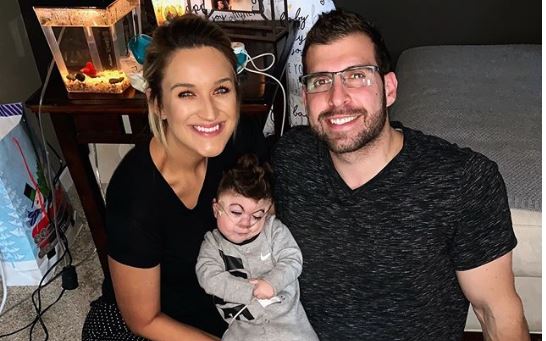 Stephanie George and her fiancé Giovanni were happily awaiting the arrival of their baby boy when at 30 weeks gestation they received life-altering news. An ultrasound revealed something was wrong with their preborn son’s heart and that he likely had a yet-to-be-diagnosed health condition. While doctors gave them little hope for his survival, the couple would soon learn that their son is a fighter.

“It was at this appointment when they told us he most likely would have some sort of syndrome, and we had ‘no choice’ but to continue with the pregnancy,” wrote George in an essay for Love What Matters. “I remember feeling angry at that, ‘no choice but to continue.’ As if they had already deemed his life to be unfit to continue if we were earlier on.”

Day 17; After two weeks I finally got to hold him. It was short but it was nice and it helped with the depression I’ve been feeling so heavily. I can’t wait until the day I can snuggle him and kiss him all I want. No updates from any tests yesterday yet. So far Sebastian has been fairly stable but still requiring more oxygen then they would like. Slowly weening him. One day at a time, always. ❤️❤️

Over the next month of the pregnancy, George and her fiancé received more information about their son’s health. They were told to “prepare for anything.” They met with a pediatric cardiologist who helped by not only diagnosing their son’s heart problems but by offering hope. While their son was diagnosed with Double Outlet Right Ventricle, Tetrology of Fallot, Ventricular Septal Defect (a hole in the heart), and Pulmonary Stenosis, the couple was comforted by the doctor’s support and compassion. But they still had a long way to go in the fight for their son’s life.

The goal was to make it to 37 weeks gestation, but the baby had other plans. At 35 weeks, baby Sebastian was born weighing just three pounds, 14 ounces.

“I heard three things when he was finally out: ‘He’s here!’ ‘He’s breathing,’ and, ‘He has a TON of hair!’ What a joyful moment. And I say moment – because the joy only lasted for that long.”

Sebastian was whisked away by the doctors and given a breathing tube which he would use for the next 80 days. He was diagnosed with encephalopathy – a brain disorder – and Cornelia de Lange syndrome – a genetic disorder that causes a range of physical, cognitive, and medical problems. It affects each person differently. Sebastian’s parents were told that he was deaf and possibly blind and that he may never walk or talk.

Daddy caught up on some much needed snuggles and bonding this weekend. Sebastian is still hanging in there. He’s been super crabby and upset today 😕 We think he’s probably still in obvious pain from his procedure on Thursday. And the other thing they’re worried about is withdrawal from the sedation medicine. Since he is so small, it’s easy for them to experience withdrawal when they ween the stronger medications. So they’re running a blood test for that and in the mean time giving him more blood just to keep his levels normal, and also giving him a little bit of Tylenol to help keep him comfortable. Hopefully he’s able to rest tonight because he had a very long day today being fussy😣 At least for once I got to comfort and hold him when he was upset, though. That’s one small thing I can appreciate tonight ❤️ 😴

At just 11 days old, Sebastian had his first heart surgery. His second surgery took place at two months. With each surgery, he suffered complications, but he continued to fight. After 101 days in the hospital, he was able to go home with his excited parents. He would have another heart surgery at 5 months.

“This was a baby that 9 out of 10 physicians expected not to survive past one month,” wrote George. “This was a baby who underwent 3 heart surgeries under 6 pounds in weight. This was a baby who had a breathing tube doing all the work for him for more than 80 days of his life – nearly consecutively – and showed little to no signs of life until he was 3 months old.”

Sebastian turned one in October 2018 and will have a fourth heart surgery in early 2019. He will also have eyelid surgery to correct a condition called ptosis which causes one eyelid to remain closed.

Off to occupational therapy with this cheeky boy 😍❤️

“As much as I wish I could take away all the pain he has endured – the surgeries, the infections, every ‘close call,’ I still wouldn’t change WHO he is,” said George. “He is a miracle, given to us. He is a fighter, a teacher, an inspiration, a pure joy to know. And he is ours.”

With all of his challenges, his mother says Sebastian has a smile that lights up a room and that he makes everyone he meets feel at peace. He has taught her and his father understanding, gratitude, humbleness, inclusion, and selflessness. Gone are their initial feelings of grief over their son’s diagnosis. He has brought them more joy than they could have imagined.