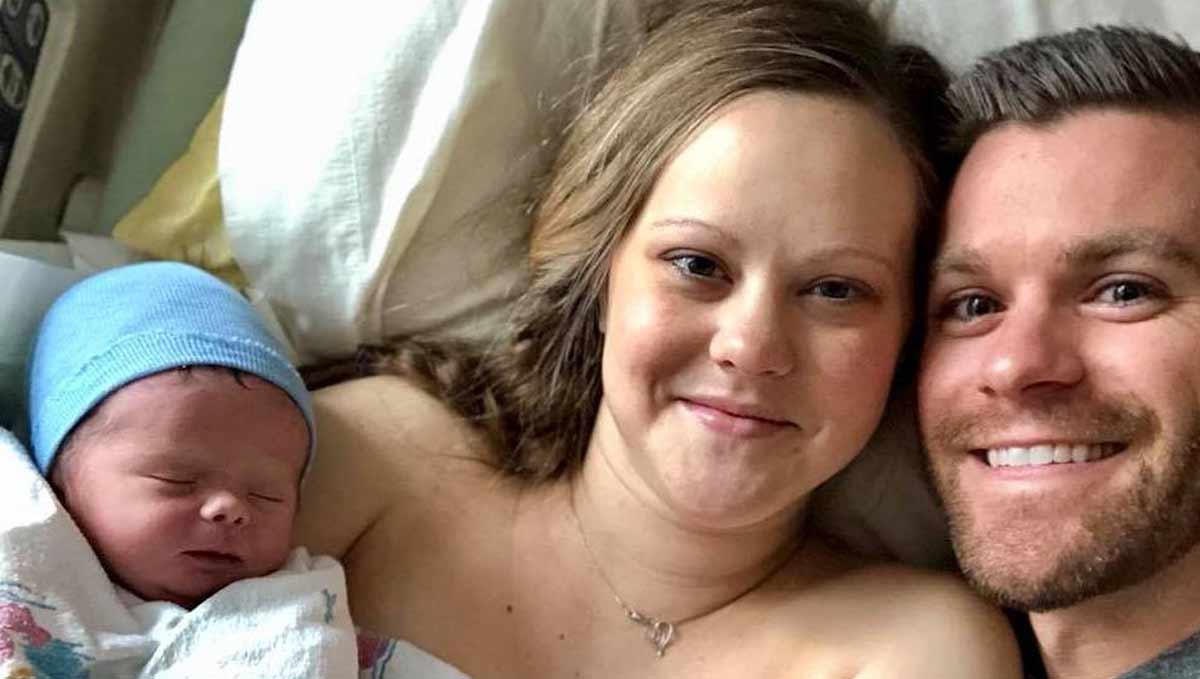 Baby Matthew is a being called a miracle after his parents learned he was misdiagnosed during pregnancy. But there is another miracle to his story: Matthew was blessed with parents who refused abortion based on a prenatal medical diagnosis.

At 23 weeks gestation, Drew and Ariann Corpstein were told that their preborn baby boy had malformed brain tissue and that his brain had not fully developed. He was diagnosed with semi lobar holoprosencephaly, a condition in which the brain’s hemispheres only partially divide. Doctors provided no hope that he would survive and even said he would likely die before birth. Doctors told the couple to abort or induce early labor and let their son die. The Christian couple, who had suffered a miscarriage previously, refused abortion but began to plan their goodbyes to their son.

“During our 20-week ultrasound, which led to several others and a MRI quickly following, the doctors discovered our baby was missing most of his/her brain,” they wrote on their GoFundMe page. “And instead of a brain, it was replaced with cerebral spinal fluid. The fluid was going to continue to expand the head of our baby. The head size was measuring about 3 weeks ahead of normal. We were told our baby wouldn’t live past several days, if not hours, or die before birth.” 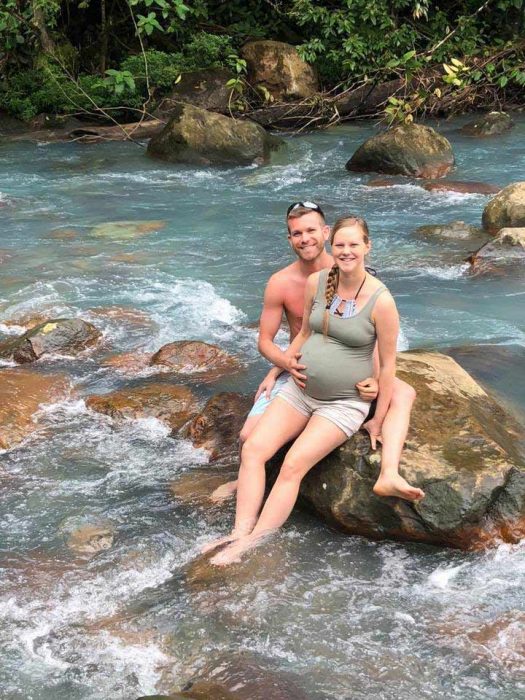 Baby Matthew’s parents refused abortion and spent time making memories when they believed their son would die before or at birth. Photo via Facebook.

The couple decided to spend the rest of the pregnancy celebrating what little time they had with their son. They made memories with him to “fill our hearts with happiness” instead of thinking only of the sadness that was to come. They took him on his first motorcycle ride and first vacation – a trip to Costa Rica. Ariann Corpstein told the Des Moines Register:

“We knew that our baby was probably not going to be born alive. Whatever happens, it’s in God’s hands.”

On July 27, 2018, the couple was told it was time to induce labor because the baby’s head was now measuring 4-5 weeks ahead of schedule. After two days of labor, on July 29, 2018, the couple welcomed baby Matthew James and, amazingly, he was alive and regulating his own heartbeat. Not only that, he began to instinctively nurse. Expecting him to be blind and deaf and unable to feel pain, his parents were shocked to see him respond to light, voices, and touch.

The couple agreed to an MRI and that MRI showed that Matthew had been misdiagnosed. He actually had hydrocephalus, a condition which causes extra fluid on the brain. He had brain tissue and hemispheres. But he needed emergency surgery to place a shunt in his brain to drain that excess fluid and allow his brain tissue to expand to where it should be. His parents say he now has “every chance at a normal life.” 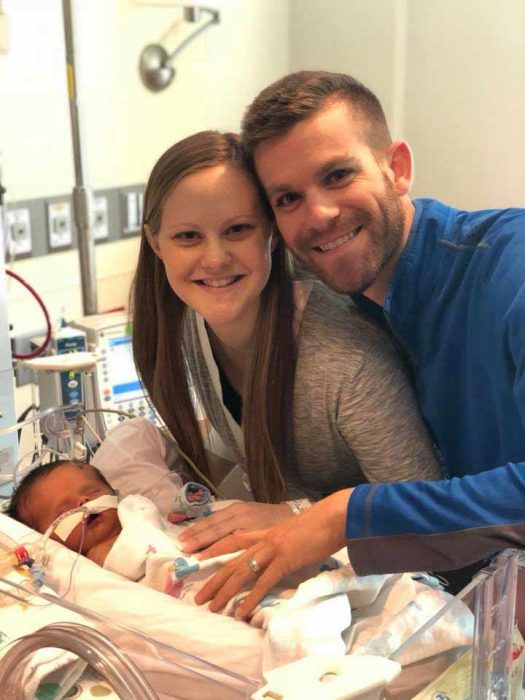 Baby Matthew’s parents refused abortion despite the grim prognosis for their son and then learned he had been misdiagnosed. Photo via Facebook.

“We simply couldn’t believe what we were hearing! We had prepared for the last 4 to 5 months of not bringing a baby home, of using hospice and end of life care, and now suddenly Matthew’s chances of survival are high and having a fully functioning life could be possible,” they wrote on Facebook. “It’s like buying a lottery ticket and actually winning the jackpot! We were overjoyed, and I just still can’t put into words how we feel about the amazing news. We know God was protecting us and our beautiful baby boy, and we had put our faith in His hands, come whatever may.”

While Matthew is at risk for neurological impacts, motor skill delays, and learning disabilities, his condition can be managed and he may have no disabilities at all. He went home on August 4 after less than a week in the hospital. They later learned that his mother doesn’t have the ability to absorb B12 and folate properly, which can lead to issues, including hydrocephalus.

READ: Two years later, boy who ‘would never smile’ can light up a room

The adorable baby, dubbed “Matthew the Great,” is currently back in the hospital battling meningitis but is said to be doing well. Doctors say he was misdiagnosed with a brain malformation because it is difficult to diagnosis babies prenatally. 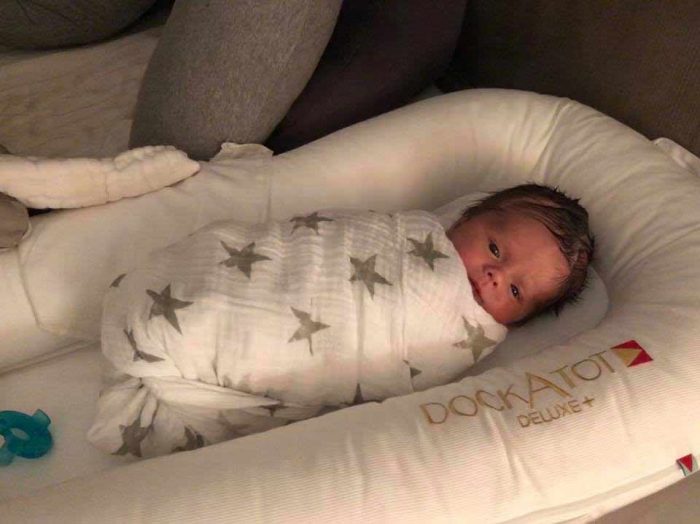 Baby Matthew is doing well after his parents refused abortion and then learned he had been misdiagnosed. Photo via Facebook.

“When you’re using imaging technology, like an MRI, on a baby that’s inside the mom’s uterus, you’re looking at something that’s very small and very far away,” Dr. Jona Conklin, a perinatologist who worked with the Corpsteins told the Des Moines Register. “If you’re trying to look for a heart defect, for example, you’re looking for something that’s about the size of a quarter or half-dollar through all the tissue that’s part of the mom’s body and fetus’ body.”

But if diagnosing a baby prenatally is so difficult, why are so many doctors so quick to offer abortion? How many children who fit the standard “wanted and planned” mantra of the abortion industry are aborted because they don’t fit the “healthy” standard of that same industry? And how many of them have actually been misdiagnosed? Matthew is his parents’ miracle and they are his because they refused to give in to the culture of death. They know that his life is valuable and beautiful no matter what society says.

“A good friend called him Matthew The Great for being such a miracle, and that’s exactly what he is,” the couple said. “He is our little miracle. A boy who wasn’t supposed to be born alive, much less do anything else, has showed us that God is protecting us and blessing us beyond anything we can imagine.”