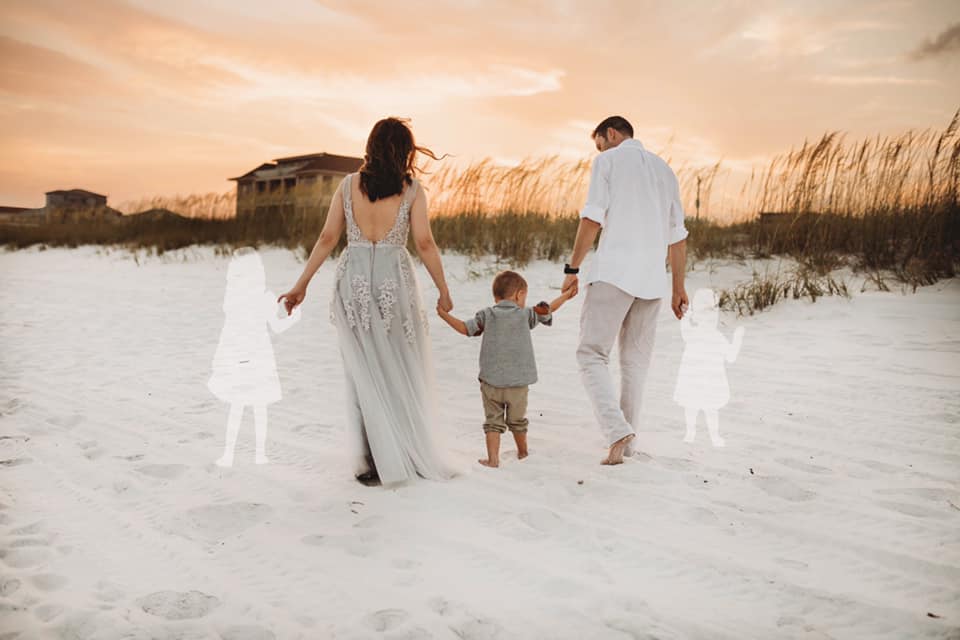 When Eric and Zandra Wingfield of Sapphire, North Carolina, were planning to take family photographs with their son Samuel, photographer Tiffany Fullove knew that Samuel wasn’t the couple’s only child. They had lost two baby girls who were loved just as much as their son.

“I knew in my heart we needed to include all their babies,” Fullove stated on Facebook. “As someone who has suffered the loss of 4 babies myself, I often times feel like people only remember my living children. But not all my babies. But to me they were very real.”

The Wingfield’s lost one daughter, Annabelle, during the first trimester of pregnancy,, and a second daughter, Sariah, was stillborn. The couple and Samuel met Fullove at a Florida beach to take photos. After the session, Allix Cox of Serendipity Photography helped Fullove add the silhouettes of two little girls into the photos. The results were both beautiful and heartbreaking. The photos were so moving that they have been shared across Facebook.

READ: Mom of stillborn baby boy: ‘These are our children from conception’

“The truth of loss is that it never truly ‘goes away’,” she wrote on Facebook. “Jesus is the Healer in every way, but He’s also the one who deeply feels alongside you. ‘He wept,’ the Bible says. So for my stillbirth mommas, this one is for you- I’m for you. I know your pain I know the agony and heart wrenching wails that won’t come to the surface yet they threaten to burn holes within you. I know the deep well of tears that stain your face and leave you feeling exhausted. I know the moment you heard “no heartbeat,” and the room started spinning like an alternate reality […] And I also know this […] You will make it.”

Eric Wingfield took to Facebook in October to announce the stillbirth of Sariah in an emotional post. They prayed for “a Lazarus miracle” for their baby girl after learning she no longer had a heartbeat, but sadly, that miracle wasn’t to be.

Live Action News has shared the stories of at least two mothers of stillborn babies who showed photos of their children and told of the heartbreak so that others would choose life knowing that children in the womb are human beings. Britni Sauls’ baby boy, Ollie, was stillborn at 22 weeks. “Ten little fingers, and ten little toes, beautiful little ears, and his little button nose,” Sauls said on Facebook. “He had every single feature a baby should have. He even had finger and toe nails.” She added, “These babies need someone to be their voice and while I’ve always been silent about abortion until now I will no longer do so.”

Anna Headly Brasic shared photos of her daughter Cayden Avery, stillborn at 24 weeks. “[T]he more I’m seeing things about how an unborn baby ‘is not a baby’ the more I was compelled to share it,” Brasic said in a Facebook post. “They ARE BABIES and the DO feel PAIN! This is NOT part of YOUR body…. This is your child.”

The photos from Fullove remarkably celebrate life – even life before birth, because life before birth was all the Wingfields’ baby girls had. Today’s society tells parents to simply move on from these losses and works overtime to dehumanize these children. But these photographs refuse to accept this, and instead, they show the world that life inside the womb is valuable, precious, and real.