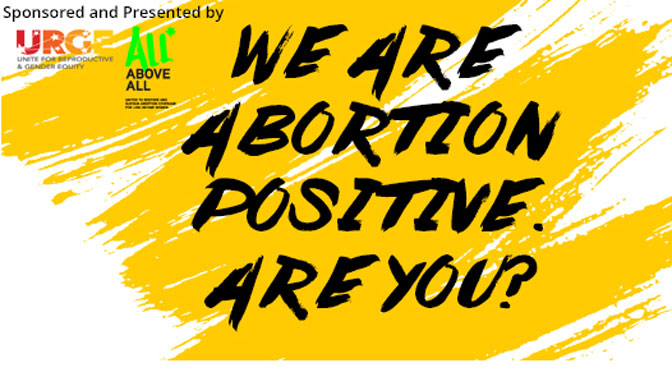 During the month of April, Unite for Reproductive and Gender Equity (URGE), a group whose motto is “Let’s Be Bold,” embarked on their national #AbortionPositive bus tour on 10 college campuses in five states, including Alabama, Kansas, Ohio, Georgia, and Texas.

With added emphasis, URGE notes about the bus tour:

Complete with giveaways and speakers, students all over the country will get the opportunity to take action and proclaim abortion access as a public good. We don’t believe abortion is a bad word, and we know that youth everywhere are ready and willing to proactively support every healthcare option available. By taking this tour on the road, we show our supporters that they aren’t alone. Our hope is that more students, young people, and community members will express their support for the freedom to make personal reproductive health decisions.

Those statements are wrong. Access to a procedure which kills a preborn child and often scars a woman physically and/or psychologically can never be “a public good.”

Groups like URGE make broad statements about “youth everywhere,” as if youth in general were in support of abortion. Perhaps those who are members of URGE are, but the majority of young people are pro-life.

Abortion is also not healthcare. It is a procedure which directly causes the death of an innocent, defenseless and vulnerable human being. That is not “a public good,” no matter the reason for the procedure.

Another hashtag for the group is to #BeBoldEndHyde. The Hyde Amendment prohibits federal dollars through Medicaid from being used to pay for abortions, with exceptions. Hyde is credited with saving over a million lives. And, considering that Americans oppose taxpayer funded abortions, the call to put an end to it is ‘bold’ indeed. However, as URGE is partnered with the pro-abortion group, All* Above All, which has taken out advertisements before against the Hyde Amendment and introduced legislation which would require federal funding of abortion, their stance is not surprising.

URGE’s April 21 rally at Kansas State University received coverage in the school’s newspaper, The Collegian, the school paper. A photo from the piece includes two young women – one of whom is a “gender, women and sexuality studies” major – holding signs, with one reading “Abortion: No Shame.” The young African-American woman’s shirt visibly reads “I Got Ninety Nine Problems But A Pregnancy Ain’t One.”

While the rally was meant to “promote a positive message about abortion access,” and they were “trying to keep the event as positive as possible,” according to rally organizer Abby Agnew, a shirt discussing pregnancy as a “problem” seems less than positive. And the young woman wearing the shirt represents a demographic for which the abortion rate is a problem.

More shenanigans occurred at other rallies. According to URGE’s Twitter account, one woman dressed up in a vagina costume. Worse yet, another woman had a young girl with her while she encouraged abortion.

Thank you UGA for rocking the hell out of the #AbortionPositive tour…& that Regina the Vagina costume! pic.twitter.com/xwE49P4ex5

Pro-aborts may feel “bold,” but their actions and words demonstrate a twisted mentality more than anything else.