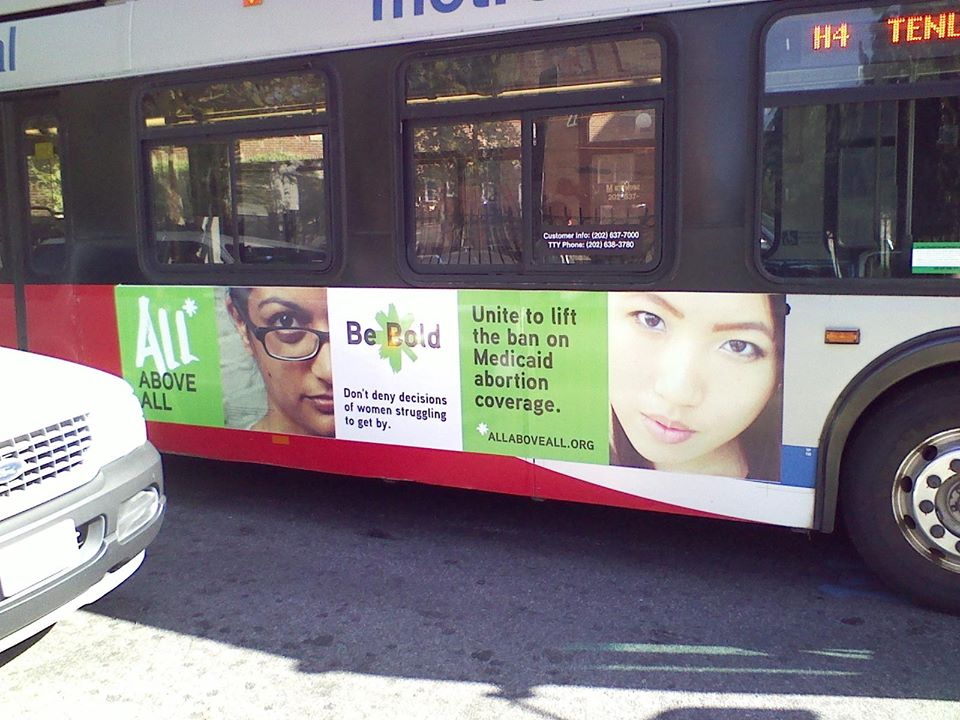 The group All Above All is calling their message a  bold one, and it certainly is. While in downtown Washington, DC I noticed a metro bus with an ad from the group. With such an ad as one that reads: “Unite to life the ban on Medicaid abortion coverage[,]” it’s pretty clear as to what the focus of All Above All is. 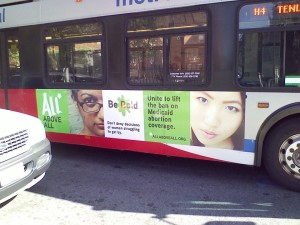 If one goes to the All Above All website, as directed to do so on the bus ad campaigns, they are urged to sign a petition to Congress, to “Stop Denying Abortion Coverage.” On the site’s “About” page, the group’s message is made more clear and it is revealed that they seek to accomplish their goal by repealing the Hyde Amendment. Passed by Congress in 1976, the Hyde Amendment prohibits federal funding from being used for abortions, with exceptions for rape and incest, as well as for health and life of the mother. All Above All does not mention that there are such exceptions.

The group puts forth its message about being there for “women who are struggling to get by.” It doesn’t seem to discuss or offer other alternatives to poor women facing pregnancies, and instead their campaign is focused on the issues of women being denied an abortion.

Again, the goal for All Above All is certainly a bold one, but I do not use the term the group picked as a compliment. Other terms which come to mind are extreme and narrow minded.

The wording of their petition to Congress, is the one way we receive insight as as to how All Above All may view the opposition. Emphasis is original:

​Every year, politicians in Congress deny abortion coverage for women who get their insurance or health care through the Federal government.

They’re interfering with a woman’s decision-making, putting abortion out of reach for many.  Denying Medicaid coverage of abortion forces one in four low-income women to carry an unwanted pregnancy to term.

However they feel about abortion, politicians shouldn’t be allowed to deny a woman’s health coverage just because she’s poor.

To make a real decision best for her

circumstances, a woman needs to

be able to afford care.  It’s time for Congress to take action.

Join Us!  Tell Congress to lift the ban on abortion coverage.

With such a view it seems that the group does not care to understand or address their opposition. In fact, they believe that those with this position, at least politicians, shouldn’t have a right to exercise such a view. Consider again this part of the petition:

However they feel about abortion, politicians shouldn’t be allowed to deny a woman’s health coverage just because she’s poor.

Except pro-lifers do not want to “deny a woman’s health coverage just because she’s poor.” It is up for debate as to if abortion can even be considered health care. And what politicians shouldn’t be allowed to do, according to this group, is follow or support the Hyde Amendment, which was already passed by Congress. It is quite the claim to make to say that politicians want to “deny a woman’s health care coverage,”  presumably referring to abortion here, “just because she’s poor.” Such politicians do not want any women to have an abortion, or only do so with certain exceptions, again, exceptions which are covered under the Hyde Amendment.

All Above All seeks to make the issue about something it does not necessarily have to be about, while ignoring what the real problem of abortion is. Even were it to appeal to the pro-choice crowd or in seeking to counter such a viewpoint, a mention of federal funds and conscience would be nice. A poll from November 2009 shows that a majority of Americans believe that federal dollars should not go towards abortions for others. The reasons are varied and make sense, whether it be for moral reasons, or the belief that one should pay for her own elective procedure.

All Above All bases their actions on an idea of equality. Unfortunately, this flawed application of equality discriminates against the basic right to life of all humans.