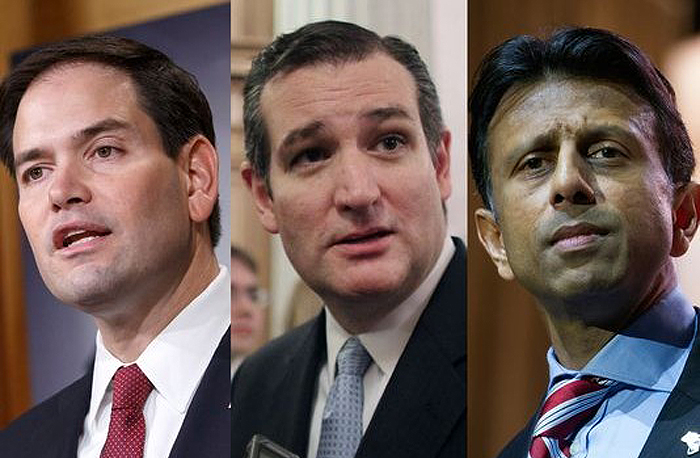 The 2016 presidential primaries, coinciding with an almost-unprecedented barrage of revelations about the crimes and callousness Planned Parenthood engages in behind closed doors, has resulted in a striking mix of highs and lows. So let’s take this opportunity to recognize, in no particular order, the 10 best statements presidential candidates have made about Planned Parenthood so far.

I believe we should use every and any procedural tool available to defund Planned Parenthood […] I think that is an excellent question for you to ask every Democrat, if they’re willing to try to shut down the government in order to force continued taxpayer funding for an organization that has now been caught on film apparently repeatedly admitting to multiple felonies in buying and selling body parts in direct contravention of federal criminal law.

Cruz understands that political bodies with pro-life majorities have far more means of championing life at their disposal than soon-to-be-vetoed votes that do nothing except make the party’s unprincipled look like they’re representing pro-lifers. Cruz knows exactly how to frame the most potent of those means, the shutdown threat, to make it politically viable.

Planned Parenthood had better hope that Hillary Clinton wins this election, because I guarantee under President Jindal, January 2017, the Department of Justice and the IRS and everybody else that we can send from the federal government will be going in to Planned Parenthood.

Presidents can’t make policy on their own (not legally, at least), but as the ones charged with “tak[ing] Care that the Laws be faithfully executed,” they have far more power to deal with violations of existing policy than Republicans typically exercise.

Between embracing that, also explaining who would really be shutting down the government over Planned Parenthood’s money, and recognizing that “offending our values and our ethics” is every bit as worthy of defunding as are criminal violations, Jindal encapsulated precisely how a potential chief executive of the United States should approach Big Choice’s relationship to the feds.

What I have advocated is that we pass law in this country that says all human life at every stage of its development is worthy of protection. In fact, I think that law already exists. It is called the Constitution of the United States […] I think future generations will look back at this history of our country and call us barbarians for murdering millions of babies who we never gave them a chance to live.

Too often, politicians unintentionally fall into the trap of talking as if abortion-on-demand’s “law of the land” status is constitutionally legitimate— something that would be nice for the courts to reconsider, but otherwise binding lines we must be content to color within. Here, Rubio helpfully reminds us that being true to the real law of the land would render Planned Parenthood the true usurpers, and puts their activities in perspective with frank talk of “barbarians” and “murder.”

I’m not sure how we fully expect to invoke God’s blessing on this country if we continue the slaughter of unborn children in their mother’s wombs, 60 million of whom have passed away since 1973.

Let’s start acting like a civilized people rather than barbarians. Let’s stop the slaughter. And when I hear people say, ‘well, we’ll defund Planned Parenthood,’ wonderful, that’s terrific, we should do it. But let’s do more than that.

Let’s not just end funding for this nightmare, let’s end the nightmare, and make it so that when we ask God to bless us, He can look down from heaven and say, ‘I will.’

Huckabee also gets the grim magnitude of the issue exactly right and uses it to explain why defunding Planned Parenthood, while obviously necessary, is just as obviously insufficient. Indeed, what other groups would “a civilized people” allow to be killed at will, so long as their murders were privately subsidized?

5. Bobby Jindal, in response to pro-abortion protest outside governor’s mansion:

Many Planned Parenthood supporters, including President Obama and members of the White House, said they have not or will not view the horrific Planned Parenthood videos […] Planned Parenthood has a right to protest today, but Governor Jindal’s office will ensure that anyone who shows up will have to witness first-hand the offensive actions of the organization they are supporting.

When abortion advocates postured that defunding Planned Parenthood was all about denying women healthcare, Jindal knew better than to treat it as a good-faith concern unrelated to abortion. He responded by unapologetically putting the focus right back on the gruesome, inhuman violence they were really enabling, complete with a dramatic visual aid. When you can have employees who target poor communities who are pushing women into later term abortions so they can more successfully harvest body parts even though late term abortions are demonstrably bad for women. You can only be horrified when you see employees picking over a petri dish for body parts while they say, look it’s a baby. There is no excuse, Planned Parenthood must be defunded!

Fiorina gets points for covering so much ground in so few words. They don’t need money because they aren’t a net positive for women’s health, and they don’t deserve money because they’re heartless, inhumane, and discriminatory. It’s all material that gets far too little attention in Congressional debates over Planned Parenthood. This is murder! Who are we as a society if we continue to let this go unpunished? Planned Parenthood is committing heinous crimes. They must not just be defunded, they must also be prosecuted […] I can understand why President Obama and his Justice Department sit on their hands and let these crimes continue. It was Barack Obama who voted against the Illinois state version of the Born Alive Infant Protection Act. Barack Obama clearly doesn’t have a problem with the murder of an innocent child born as a result of a botched abortion.

Like Huckabee, Santorum excels at conveying that abortion isn’t just another misguided political issue, but an act of evil. In particular, the other candidates should follow his lead in calling out the reason why Obama has not problem keeping the tax money flowing to an organization that dismembers children for parts: because he’s already sold out to the cruelest variations of abortion imaginable (also, contrast Santorum’s moral clarity with Jeb Bush’s insistence that, “I don’t think Barack Obama has bad motives”).

When we reach a point where we are so callous that we kill innocent little babies, what else won’t we do? Is there a limit to our barbarism? Human history is replete with examples of what happens when we devalue human life. Here in the United States of America, we have a history of compassion and kindness that characterizes a model citizen. It is time to reclaim our heritage and reject the purveyors of selfishness and callousness.

Congress should defund Planned Parenthood and consider having the IRS revoke its status as a 501(c)(3) organization. I believe deeply, as it is written in the Declaration of Independence, that we are all endowed by our Creator with certain unalienable rights. First and foremost among these unalienable rights is life, and we created a government in order to protect it — not fund its destruction.

Dr. Carson simply and elegantly connects defunding Planned Parenthood to America’s moral heritage, our founding promise to every human being, and the broader historical lessons about degrading human sanctity that too many cultures have learned the hard way. He also makes the often-overlooked point that this is anything but the sort of organization that deserves to enjoy tax-exempt status.

I call on mainstream media to ask Hillary Clinton if she is pleased that she has so much passionate support from Planned Parenthood, an entity that appears to be a national criminal enterprise.

Short and sweet, Cruz reminds us that the defunding debate would take on a strikingly different tone in the public consciousness if we simply refuse to refer to Planned Parenthood as a “health” organization at all, and insist on framing our every mention of the butchers with a more appropriate moniker.

We close with what may be the most critical point to reorienting public opinion against Planned Parenthood: that their pervasive women’s health posturing simply isn’t true. Killing someone to benefit someone else (particularly if the “benefit” sought isn’t even related to a physical ailment) is unrecognizable as an application of any legitimate physicians’ solemn duty to “first, do no harm.”

We may have seen some awfully weak tea from some of the people running to become the next pro-life leader of the free world, but we’ve also seen other would-be leaders deliver much stronger, smarter, and sharper reactions to Planned Parenthood’s ongoing baby parts nightmare. If the rest of their party follows the example of the latter group rather than the former (admittedly a big “if”), taxpayer funding of America’s largest abortion enterprise won’t stand a chance.