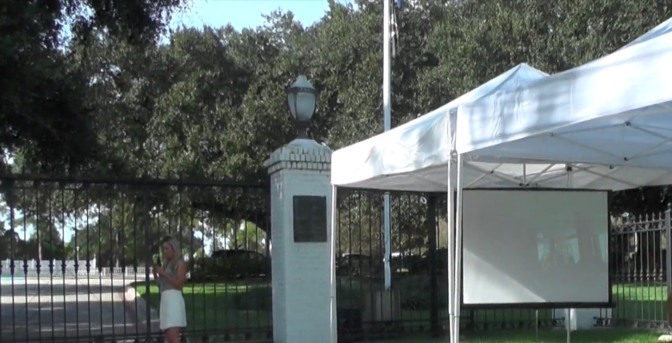 Planned Parenthood Gulf States surely thought they’d appear to dominate the moral high ground in the rally they planned outside the Louisiana Governor’s mansion on Thursday, positioning it as a protest of Bobby Jindal’s decision to cut the state’s Medicaid contract with the abortion giant. What a heartless blow to “the health care needs of the most vulnerable”!

But as Kelli reported earlier, Jindal responded in a rather dramatic fashion: he set up a big screen outside the governor’s mansion to play the Center for Medical Progress videos on a loop, for all to see, during the protest.

In a defiant twist of the rhetorical knife, his office also released a statement noting that due to abortion apologists’ cowardly reluctance to watch the videos for themselves, he was “ensur[ing] that anyone who shows up will have to witness first-hand the offensive actions of the organization they are supporting.”

Pro-life politicians, no matter what office they’re in or aspire to, should look at this as a case study in messaging. There are lot of decent, well-meaning people in public office who believe in protecting the preborn however they can, but far fewer with strong instincts on how to outwit the opposition at the public relations game.

If there’s one area where pro-aborts excel, it’s that they never miss a trick in deploying one heartstring-tugging distraction after another—you’ll take away preventive care! Traumatize rape victims! Force transvaginal ultrasounds! Abandon babies after they’re born! Let pregnancies kill mothers!—at such a dizzying rate and repeated so many times in the media and pop-culture that Republicans often let themselves get preoccupied with, “No seriously, I really do care!” that the children Team Abortion has been murdering get lost in the confusion.

Nationally, Republicans started this year with a whimper when they let precisely that hysteria delay a vote on the 20-week abortion ban for months, which Congressional GOP leaders followed up with noncommittal confusion over whether and how to defund Planned Parenthood. The other factor at play here seems to be an assumption that they can only be expected to get significant results when it’s easy, i.e., when there are enough pro-life legislators for a bill to sail through Congress to a happily-waiting pro-life president (that they didn’t do so even when they had all of that from 2003 through 2006 is another rant).

Sorry, but rarely is it that easy, and when it’s not, leadership does not entail throwing up your hands and saying, “oh well, maybe next year!” This is where Jindal demonstrates the missing link in more conventional pro-life politicians’ approach: you have to enter the PR battle and beat pro-aborts at their own game.

To respond with something as straightforward as just playing the videos cuts through the sideshows and puts the focus right back on the real reason Planned Parenthood is in hot water: the crimes and barbarity captured on tape. Unfortunately, the AP reports that the “screen erected by the mansion fence wasn’t visible from the protest site across the street” and the “sound was difficult to hear where the five dozen protesters stood,” so it couldn’t change hearts and minds among those present (only 60? Great work, Planned Parenthood!), but the message it sent in the media came through loud and clear: watch the videos if you really want to know what it’s all about.

This approach—defiant, focused messaging that is constantly searching for dramatic, attention-grabbing ways to put the heart of the issue in front of people—paired with a side of simple imagery like this to dispatch abortion apologists’ peripheral lies, relentlessly driven through every media platform available is how pro-lifers change the prevailing narrative and turn public opinion to our side. Bobby Jindal deserves major kudos for showing the rest of his party how it’s done.