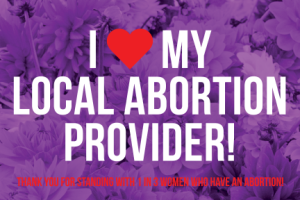 Did you know that there’s a holiday just for abortionists? A day for abortion advocates to celebrate their love for the people who make lucrative piles of money for tearing babies apart, limb from limb.

Apparently, this “holiday” has been around for almost 20 years, and it commemorates the anniversary of the murder of abortionist David Gunn, which happened on March 10, 1993. And while that murder was an inexcusable act of violence, it’s sickening that abortion advocates have turned one act of violence into a day to celebrate millions of acts of violence.

How are they celebrating? The 1 in 3 Campaign asked activists to send a postcard expressing their thanks. The Gloss listed 10 reasons to thank an abortion provider. Here are a few of them:

Abortion is a necessary medical procedure for many women who cannot safely carry a pregnancy to term. Abortion providers provide a sometimes lifesaving service.

… They prioritize their patients’ health over national politics and rhetoric. They are good doctors. The Hippocratic Oath isn’t conditional.

… They follow the law, which states that abortion is legal in this country, despite the multitudes of backdoor workarounds that some legislatures instate to limit abortion access.

And following the law is a rich thing to claim, considering that abortion providers are constantly caught circumventing the law, if not blatantly breaking it. From covering up child sex-trafficking, refusing to report statutory rape, and giving women dishonest and manipulative information to keeping their clinics in abysmal and disgusting conditions, abortionists are hardly pillars of the law-abiding community.

Physicians for Reproductive Health compiled a list of reasons why abortionists do what they do, in their own words. Some highlights:

“And they need to know that the reason I continue to go to work every day is that I love the work I do, that there is nothing I would rather be doing and that I truly feel there is nothing better I could be doing for the women and families of this country.”

“[T]he ability to provide this critical health service has been empowering to my patients and to myself as a physician.”

“In the small still hours of the night I am at peace with myself and with God, who gave me this mission in life.”

“Like many others, I find the work enormously satisfying and feel pleasure that my professional activities now match my pro-choice words.”

“It is really important to help women through the abortion experience so that they come out on the other side feeling they have made the best choice for their lives. It is wonderful to be a part of that process.”

“In our growing world population, unwanted pregnancies can only result in tragic outcomes for civilization, now and in the future.”

It goes on and on, each response as sickening as the ones excerpted here.

Talking Points Memo also had strong words of praise for the abortionists out there:

Like any profession, abortion doctors are not homogeneously perfect. But the doctors I have met and worked with are all competent, and compassionate. They take pride in their work, and why not?

Ah, yes. The pride these saints of the pro-abortion movement take in the murders of unborn children. It’s truly, truly heartwarming. And they really are all just so competent and compassionate. Look at arguably one of the most well-known and highly celebrated abortionists practicing right now, LeRoy Carhart. He’s so competent that he’s killed two patients, has maimed countless others, practices in deplorable conditions, and has had multiple complaints filed against him, by both his own staff and his patients. And yes, this is a man the pro-abortion lobby consistently praises and holds up as a beacon of compassion. He’s just one example, too. Listing all of the abortionists who are as “competent” as LeRoy Carhart would take way too long.

Interestingly, while most news outlets were bemoaning the lack of respect abortionists receive in the medical industry, and, well, the rest of the world, the Huffington Post was insisting that they aren’t ranked somewhere around the level of ax murderers.

You’d think, what with the incessant campaigns to hobble, harass and vilify them, that abortion providers would be somewhere right up there with ax murderers, and at least lying low under the radar. But you would be wrong.

Really? The author, Fran Moreland Johns, quotes a few abortionists who talk about how awesome their job of killing unborn babies is, but otherwise doesn’t really do anything to show that abortionists are actually beloved. In fact, late-term abortionist Susan Robinson, featured in the pro-abortion documentary After Tiller, complained that doctors view abortionists as the lowest of the low. Even in the medical industry, no one likes abortionists. It’s probably that whole Hippocratic Oath thing. People who vow to do no harm aren’t usually all that anxious to stop a beating heart. That takes a special kind of person. And the way abortion advocates carry on, you’d think abortion made them into some kind of holy saint or martyr. Moreland Johns even recommended that we all light candles for them.

What can we, as pro-lifers, take away from the National Day of Appreciation for Abortion Providers? It’s important to look closely at this, because it shines a rather bright light onto the abortion lobby – one that most Americans won’t see. After all, how many average people have even heard of this day? The only ones who have are the extremists, and considering that most Americans now consider them pro-life, they’d likely be horrified to find out about this – not so much the day itself, but the fawning adoration for abortionists. Even most Americans who consider themselves “pro-choice” don’t love the idea of abortion. Very few think it should be legal past the first trimester.

It is a rare person who celebrates the idea of abortion. And that’s exactly what the pro-abortion extremists spend March 10 doing.