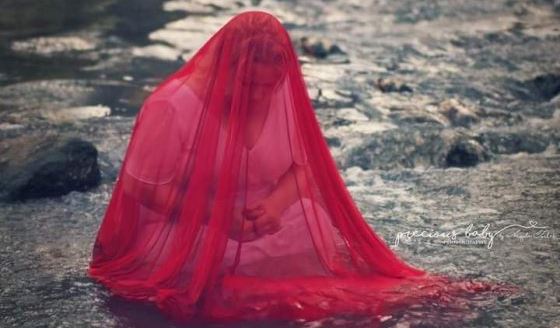 Like many women who walk into an abortion appointment, Dusty Johns was feeling pressured. She didn’t want to end her pregnancy, but her boyfriend did. And after years of abuse, Johns felt she had no other choice than to follow through with the abortion he pushed on her.

As a child, Johns’ mother allowed her father to have full custody of her, along with her brother. He was a convicted rapist and kidnapper. He would spend years raping Johns, telling her that if she became pregnant, he would just take her for an abortion.

“I knew that abortion meant killing your baby, and I knew that it was wrong because even as children we have the instinct to protect innocent life,” Johns, a nurse, wrote in an essay for Pro-Life Utah. “So, when my father thought he was comforting me with the sickening promise of abortion, I would become filled with anger.”

Overcome with hopelessness and feeling forgotten by God, she soon learned that her mother had aborted one of her siblings, before she had been born. Her mother strangely acted as though that baby had been Johns herself — who just wasn’t ready to be born yet. Johns was hurt by this news, knowing that it was not her, but her sibling who had died through abortion.

Two months before her 14th birthday, Johns was able to escape her abusive life, but, she says, her parents had already successfully groomed her. “I no longer valued life, especially not my own,” she explained. “And I definitely didn’t value innocent life, because it was something that had been stolen from me.” 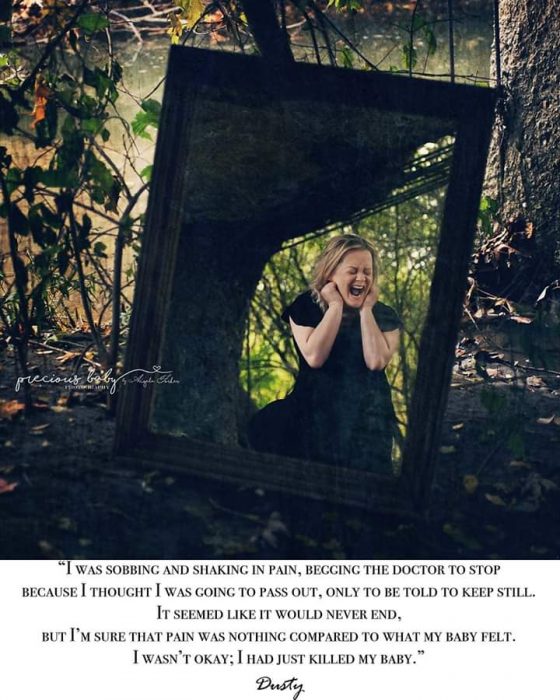 She became a single mother at 19, and by age 21 was dating a man she had known when they were younger. Though she had vivid memories of him molesting her when they were children, she began an unhealthy and abusive long-distance relationship with him, and eventually moved to be near him. Two months later, she was pregnant.

“I remember naively thinking, ‘Maybe my boyfriend will love me again.’ But as we sat across from each other on his bed and talked about it, I realized just how much he hated me and how much he hated our baby,” she wrote. “I started to feel sick as he said things like, ‘If you have this baby, I will want nothing to do with you. I will make your life miserable. You’ll be sorry you had this baby.’ I knew what he wanted me to do and I was terrified.”

Johns turned to her mother, who didn’t offer any support, and only suggested abortion. Still, Johns waited a couple of weeks to call Planned Parenthood, hoping that somehow her boyfriend would decide to keep the baby. But eventually, through tears, she made the call to book the appointment, and on Monday, December 10, 2001, she walked into Planned Parenthood in Spokane, Washington.

READ: I was coerced into an abortion at Planned Parenthood by my baby’s father, and I wish I could go back and undo it

“I remember hoping that no pro-life advocates would be outside that morning because I was so terribly ashamed of what I was about to do,” said Johns. “Yet, when we arrived there weren’t any advocates and I suddenly found myself desperately wishing that there were. I wanted so much for someone to be outside of that building to tell me that there was hope, that there was another way, and that I didn’t have to go inside. But there was no one. It was just me and the man who was insisting that our baby be killed.” 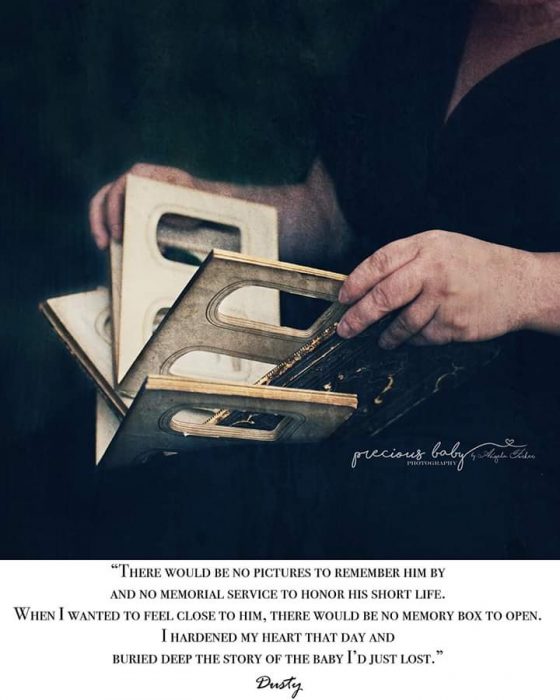 Once inside the facility, she underwent an ultrasound that she said was “just needed to confirm that I was nine weeks pregnant so that they could put a $500.00 price tag on the life of my baby.” She went through Planned Parenthood’s version of counseling, which didn’t include even the mention of adoption or parenting. The counselor lied, and told her that her baby wasn’t formed and had no brain activity. Despite her crying and shaking, no Planned Parenthood staff cared to ask her if she was okay or if she even wanted the procedure. They took her money and went about the business of killing her baby.

“From the moment we walked in the clinic doors, there was little to no eye contact, no comforting touches, no reaffirming questions like, ‘Are you sure you want to do this? Are you okay?’ even when they could see me crying and shaking in fear. I found this bizarre,” she explained, “because as nurses we pride ourselves on providing comfort and being perceptive. Not these nurses.”

She recalls that the abortionist entered the room without saying a word or looking at her. She was given local anesthesia, and though she couldn’t feel what was happening to her body, she saw the “violent and blind manner in which the Doctor was manipulating my body and the way that each dilator came out of me covered in blood.” She was panicking on the inside, but was unable to move.

“What came next is a sound that I will never forget,” she said. “I wasn’t prepared for how loud the vacuum would be. I remember trying to tell them to STOP as soon as it turned on, but the drugs were stronger than my body and even if I could have spoken, no one would have heard me. I knew that the nurse or my boyfriend had to have seen me struggling to speak, but neither one of them spoke up for me as my precious baby was rapidly dismembered and sucked from my body.”

As soon as the procedure was completed, Johns was rushed out of the room into recovery. Thirty minutes later, she was sent home.

“I was not expected to grieve the death of my second child,” she wrote. “There would be no pictures to remember him by and no memorial service to honor his short life. When I wanted to feel close to him, there would be no memory box to open and when the tears threatened to come there would be no one else that held him dear to turn to for comfort. I hardened my heart that day and buried deep the story of the baby I’d just lost.” 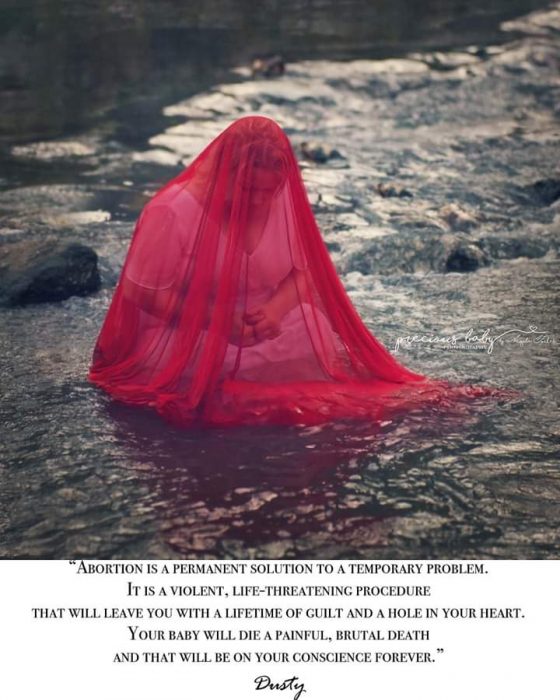 A few months afterwards, Johns began cutting herself. A few years later, she started burning herself. The self-harming behaviors are common for post-abortive women, and are known as post-abortion syndrome, a form of PTSD. Johns ended up in the emergency room several times, and in a psychiatric hospital several times as well.

“I hated myself so much that I endured multiple abusive relationships as well,” she wrote. “This behavior continued on and off for about twelve years, but I never knew why I did it. […] I buried the abortion so far down that I never thought that it might have been the guilt and sorrow of killing my own child that was causing my slow suicide.”

After visiting an exhibit on human bodies and seeing a perfectly formed nine-week-old preborn child, she realized that Planned Parenthood had lied to her. Her preborn baby was a baby. However, she continued to justify her experience because of the abusive and hopeless situation she had been in. Then, in the spring of 2019, after watching the pro-life film Unplanned, she told Live Action News “anxiety attacks, insomnia, and daily crying spells” came “crashing down – bringing memories and feelings of my abortion to the surface after 17 years.”

She contacted Utah Abortion Healing, a sub-group of Pro-Life Utah, and took part in the 8-week support group for post-abortive women. There, she experienced unconditional love and grace and felt able to open up. Within a year, she became a pro-life speaker, sharing her story for the first time publicly at The Church at Planned Parenthood in Spokane, where the abortion of her baby Tyler had taken place.

“I finally realized that although I had been pressured, threatened, and coerced – ultimately I had allowed the murder of my own child,” she said. “I realized that my baby was innocent no matter how horrible his father had been to me and that he had deserved my love and acknowledgment all of those years. Had my sweet baby been given the chance to live, he would have been every bit as awesome as the four living children I have now. He would have been just as much me as they are.” 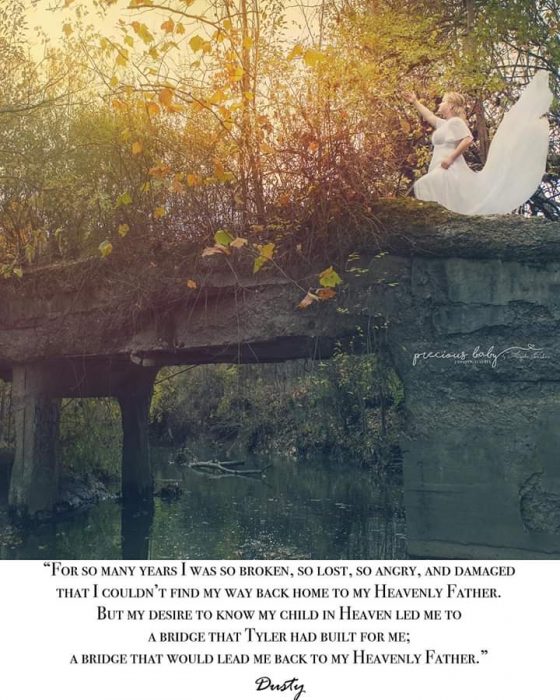 Photo copyright Angela Forker for After the Abortion series. Used with permission.

Johns felt moved to name her baby Tyler and determined that his life, though short, would have a purpose. In his honor, she is working to help save women and children from abortion.

“The opposing side would like to say that I would have been better off terminated in the womb than given a life with inevitable child abuse, poverty, mental illness, and domestic violence among other hardships,” she said. “They would have you believe that it is an act of compassion to end the life of the sufferer through abortion in order to prevent their future suffering.  But every one of us suffers in our lives; every one of us has felt deep pain.  Without despair we wouldn’t be able to recognize joy. My life has had great value despite what I was born in to. Along with the pain that I have survived, I have also experienced tremendous joy that I wouldn’t trade for the world.”

Johns was the keynote speaker at the Southern and Northern Utah March for Life in January.