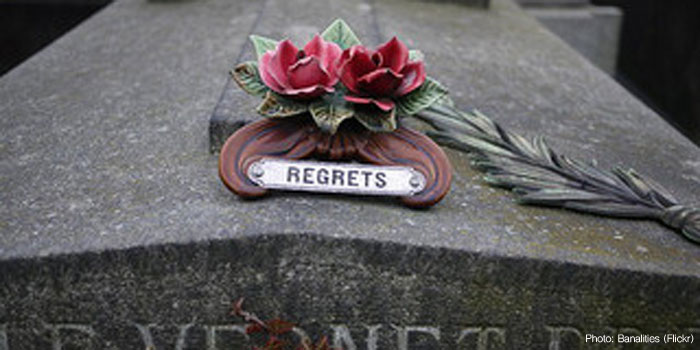 In a new video from Save the Storks, post-abortive fathers share their grief over the loss of their children to abortion. They tell how abortion regret sent them into depression, often turning to drugs and alcohol to try and bury the pain. These stories are often silenced by the media, since abortion advocates argue that men who are against aren’t allowed an opinion on the subject; only men who express pro-choice opinions are allowed to be heard.

“I’m the father of five, but I only got to raise three of them,” says one of the post-abortive fathers. “The first two didn’t do anything wrong that I didn’t want to raise them. They didn’t have a chance because they were both aborted.”

Each of these fathers has a story to share, stories of pain and abortion regret for the role they played. Each is different – one knew about it ahead of time, while another didn’t, and one was present at the death of his child. One changed his mind and saved his baby. No matter the circumstances, they all agree: abortion was not the answer to the unplanned pregnancies.

“It was later in the evenings; as I would go to bed, I would cry,” said one father. “And even though it’s been decades since the first two were lost, obviously there’s still an emotional place that comes up.”

“I found out my high school girlfriend was pregnant with my child when I was 16-years-old,” recalled another. “… The moment that I found out that she had an abortion I was devastated.”

Whether immediately feeling the regret, or having the pain hit them after the fact, these fathers share stories of drug use to cover the pain.

“The depression that I went through for such a long time over it really, really set in,” explained one post-abortive father. “It didn’t just mess me up, it messed her up as well. Mentally, emotionally. We both started drinking heavily, which we didn’t do much of at all. We both started using drugs, which we never did at all.”

READ: Abortion and men: What’s a father to do?

Another man echoed that, saying:

I continued in a lifestyle of medicating with alcohol and marijuana.

The father who was present at his child’s abortion said he can still recall the sound of the motor decades later and remembers “seeing these tubes that were being filled with red and white and the sound of suction. It all stopped. The room was silent and they said, ‘We’re done. It was a success.'”

That success, he now knows, was the destruction of his child’s life, and he wishes someone would have stopped him.

These men encourage anyone considering abortion to sit down with someone who has been through it to learn what it has been like for them after the fact. And for anyone who is already suffering the emotional and mental effects of abortion, they urge them to find someone to talk to so they can find healing.

Abortion isn’t just about women. Abortion steals a life. Abortion steals fatherhood. Men, who are wired to be protectors, aren’t able to protect and save their own children, and they live with abortion regret just like women.