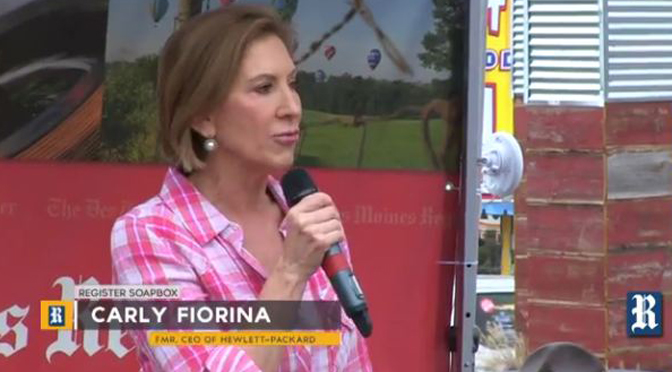 Pro-abortion outlets including Gawker, Jezebel, Raw Story, and ThinkProgress are ganging up on Carly Fiorina for a mix-up at the Iowa Right to Life Presidential Forum, which was held at the Greater Des Moines Botanical Garden. A preschool field trip was going on there at the same time, and it seems Fiorina invited several of the children to sit on stage while the rally was going on. Some parents have expressed anger at Fiorina for allegedly pressuring their kids, who were as young as four and five, to take part in the event and be exposed to the heavy, disturbing subject of abortion.

For the record, Fiorina’s campaign disputes that version of events. A spokesperson first said simply, “We were happy that these children chose to come to Carly’s event with their adult supervisor,” then on Thursday deputy campaign manager Sarah Isgur Flores released an extended explanation (which only ThinkProgress has bothered to update their story with)…

In Des Moines yesterday, a group of preschoolers along with their parents and teachers followed Carly right into the event she was speaking at for Iowa Right to Life. Earlier, she’d run into the kids in the Botanical Gardens and watched the koi with them for a while. I guess the kids must have thought she was pretty neat because then their teachers and parents and the kids all followed Carly into the event complete with Carly stickers.

Considering that Live Action routinely catches all four of these sites peddling egregious falsehoods and Fiorina turned out to be telling the truth the last time pro-aborts accused her of lying, it’s pretty safe to guess which side has more credibility.

It’s certainly possible that there was a communication breakdown in terms of where the school group thought they were headed, and the chaperones erred in deciding to follow a political candidate to a political event without getting the permission of parents that weren’t present, but a certain degree of confusion is to be expected when political events happen at public venues where people are present for other purposes—regrettable, but hardly the end of the world.

But for the sake of argument, let’s temporarily suppose Carly’s attackers are right, that she saw a random group of children passing by and pounced to pressure them into a photo op, without the slightest regard for the kids’ peace of mind or the parents’ decision. Such a move would be an encroachment on parental rights that no pro-lifer should defend.

Abortion is an ugly, horrifying subject, and as important as it is for everyone to understand it eventually, we can’t presume to know when and whether other people’s children are ready to handle that level of darkness. It is ultimately up to every parent to decide when and how to broach the subject with their children.

Indeed, our side is the champion of parental rights in this debate, so it’s more than a little ludicrous to see pro-aborts lecturing Fiorina about this alleged offense while they routinely defend far more egregious interference in how parents raise their kids.

After all, they’re the ones who vigorously oppose laws requiring parents to have a say in—or even to know about—their teenage daughter having an abortion. They’re the ones who support health programs intentionally hiding teens’ sexual activity from their parents. They’re the ones who aren’t bothered to see Planned Parenthood explicitly tell kids that “despite what your parents and teachers say,” knowing about sex is way more important than understanding math or chemistry, or teach teens and younger a whole array of pro-promiscuity lessons about “sex play,” “embracing the slut label,” and even deliberately hiding one’s HIV status from a sex partner.

But no, none of that is worth an uproar. The real crime is that some kids at a botanical garden saw what a developing preborn baby looks like. The horror.

Parental rights are under attack, but not by Carly Fiorina. It is the abortion lobby and its fans who want to cut Mom and Dad out of the equation and force their demented values on America’s kids. Big Choice is a menace to children outside of the womb as well as within.