Health Feedback, which is now being investigated after recruiting two abortionist “fact checkers” to target the pro-life group Live Action, has added a third abortion advocate who has also admitted she previously committed abortions, to their list of dissenters to the claim that “abortion is never medically necessary.” The additional abortion “fact-checker” on the site appeared the same day that four U.S. senators sent a disapproval letter to Facebook CEO Mark Zuckerberg for allowing biased abortionists to “fact check” two Live Action videos.

Following news about the letter, Facebook’s alleged third party group, the “International Fact-Checking Network (IFCN),”  — a unit of the Poynter Institute which selected the Health Feedback site — published the statement below, announcing that it would be investigating Health Feedback for potentially “violating IFCN’s Code of Principles…to non-partisanship….”

But Health Feedback appears to have dug in its heels, adding a statement by Alexis Shub, who is described as “Senior Lecturer, Department of Obstetrics and Gynaecology, University of Melbourne.”

Health Feedback’s editor, Flora Teoh, who previously worked with Singapore research company A*Star as a “postdoctoral fellow in the Humanised Mouse Unit at the Institute of Molecular and Cell Biology,” even found another abortionist to cite, writing, “Dr. Jen Gunter’s article explains in detail why a C-section for expedited delivery is not always safe for the mother (its safety is greatly dependent on her medical condition and the gestational age of the fetus), and why an abortion can sometimes be safer than a C-section.”

I am an OB/GYN board certified in two countries. I did a 5 year residency in which I trained to do abortion up to about 24-25 weeks… For 3-4 of the 6 years that I practiced in Kansas there was no gestational age limit…. That means I could have done an abortion at any gestational age — even right up to the due date….

In general, we will offer a c-section at 24 weeks, but if it looks promising at 23 weeks and 2 days and based on the patient’s wishes we may offer one that early. There are times at 25 or even 26 weeks where we recommend against a c-section and an abortion is offered….

It is unclear whether Gunter reached out to Health Feedback or they chose to cite her on their own. Either way, using Gunter to fact check a pro-life organization is hardly neutral or “non-partisan” — something the IFCN implies is part of its code of principles for fact checking.

Gunter adamantly defends abortion online and has referred to Lila Rose on Twitter as a “forced birther who knows nothing about medical care.” Gunter has also attacked the American Association of Pro-Life Obstetricians and Gynecologists (AAPLOG), accusing the group publicly of taking part in “hate speech” and “spreading lies” because of their view against abortion. She is calling for AAPLOG — an organization of over 2,500 OBGYNs — to also be fact checked by Facebook. 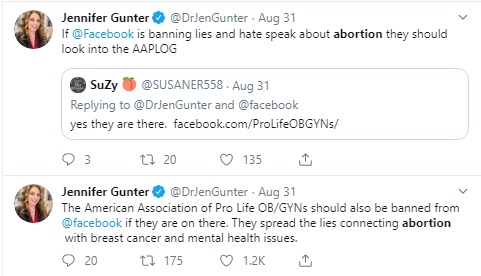 But Live Action did not make its claim in a bubble. Over 1,000 physicians have signed the Dublin Declaration  including neonatologists, pediatricians, obstetricians/gynecologists, and other medical professionals. In addition, Live Action’s claim that abortion is never medically necessary is supported by the 2,500 members of AAPLOG.

Live Action News has documented the modifications made to the original Health Feedback “fact check” of Live Action below,  using archived links to show that the original fact check included two abortionists, as has been reported to a great extent.

Who’s behind this “fact checking” website and what are the conflicts of interest? 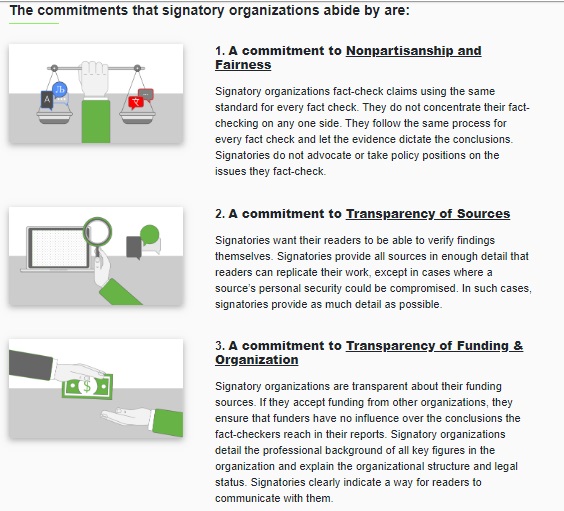 The Poynter Institute states online that the IFCN “was launched in September 2015 to support a booming crop of fact-checking initiatives by promoting best practices and exchanges in this field.” But Facebook’s go-to fact check monitor has its own set of conflicts that could point to a bias against pro-life groups…

Funding for Poynter is provided by:

Other funders include Google, the National Endowment for Democracy, and the Omidyar Network.

Open Society Foundations has been one of Poynter’s largest funders, according to now dead links that are available for archived viewing only. A previous review of the George Soros-founded organization by Live Action News found that Open Society funds many pro-abortion organizations and abortion efforts:

Physicians for Reproductive Choice and Health:

Regents of University of California:

In fact, a simple search of grants awarded by the Gates Foundation reveals the foundation has sent millions to the largest U.S. provider of abortions, Planned Parenthood.

A search by Live Action News has revealed additional funders to Poynter who also support Planned Parenthood as well as other pro-abortion endeavors, including:

Live Action has been in an ongoing battle to fight censorship from Big Tech companies:

Abortion is one of the most divisive issues in the nation and just one of many reasons that Facebook and other social media giants should not be inserting itself into this debate. The glaring conflicts reported by Live Action News coupled with deliberate recruiting of abortionists to fact check Live Action are clear evidence that Big Tech is censoring pro-lifers online.