Washington, D.C.  –  Today, Sen. Ted Cruz (R-TX) will host a hearing to discuss Twitter and other tech companies engaging in viewpoint censorship. The hearing titled: “Stifling Free Speech: Technology Censorship and the Public Discourse” will include testimony from Chuck Konzelman, one of the film-makers behind the pro-life film Unplanned, whose account was suspended the morning after its release and reinstated after public backlash. Other witnesses include:

“Twitter is misleading the public and their shareholders by claiming to be a free marketplace of ideas. Their core values claim to ‘seek diverse perspectives’ and ‘free expression’ while ‘respecting the user’s voice.’ In reality, Twitter manipulates what users see by deciding what organizations and individuals can ‘pay to play’ on their platform. For example, Planned Parenthood spent over $120,000 in the last week on ads promoting their pro-abortion ideology on Twitter. But Twitter has told us, one of the largest pro-life organizations online, that we are not allowed to promote our pro-life messages on the platform. Live Action’s ad account is blocked from promoting ads. SBA List, and other pro-lifers face the same issues. Being pro-life on Twitter is a cardinal sin.”

“What happened to the Unplanned movie is wrong and indicative of Twitter’s ideology at work. Twitter’s blatant censorship of pro-life messages and messengers is outrageous and goes against their promise of a free and global conversation without barriers.”

Live Action Blocked: Twitter suspended Live Action’s ability to promote tweets in 2015 and blocked Lila Rose’s account from advertising in 2017. Nothing has changed since then. Lila Rose was recently named by the Atlantic as “The Face of the Millennial Anti-Abortion Movement” and Live Action has the largest online following in the pro-life movement, with nearly 3 million followers. Polls show that millions of Americans hold the same view and are pro-life.

Emails from Twitter: Blatant viewpoint discrimination can be seen in emails from Twitter telling Live Action exactly what to delete, including posts that show an ultrasound image and any posts that discuss defunding Planned Parenthood. Because many of our tweets link back to Live Action’s website, Twitter requires Live Action to scrub our website of similar content before it will allow us to promote our tweets again. It went even further in an email on June 1, 2017 advising us to create a new Twitter account that links to a new website. In other words, Twitter wants Live Action to scrub almost all of its pro-life messaging.

Screenshots: Screenshots of some of the tweets in question are here. The Washington Post wrote about the situation here and Lila Rose published an op-ed in USA Today here. 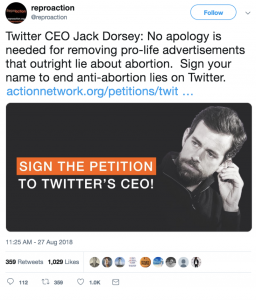 Live Action is a national nonprofit organization dedicated to exposing the truth about abortion and affirming the life of every child. Live Action exists to change hearts and minds about abortion through compelling educational media, human interest stories, and investigative reporting that exposes the lies and corruption in the abortion industry. With the largest online following in the pro-life movement, Live Action’s videos reach millions of people every week. Find out more at http://www.liveaction.org.