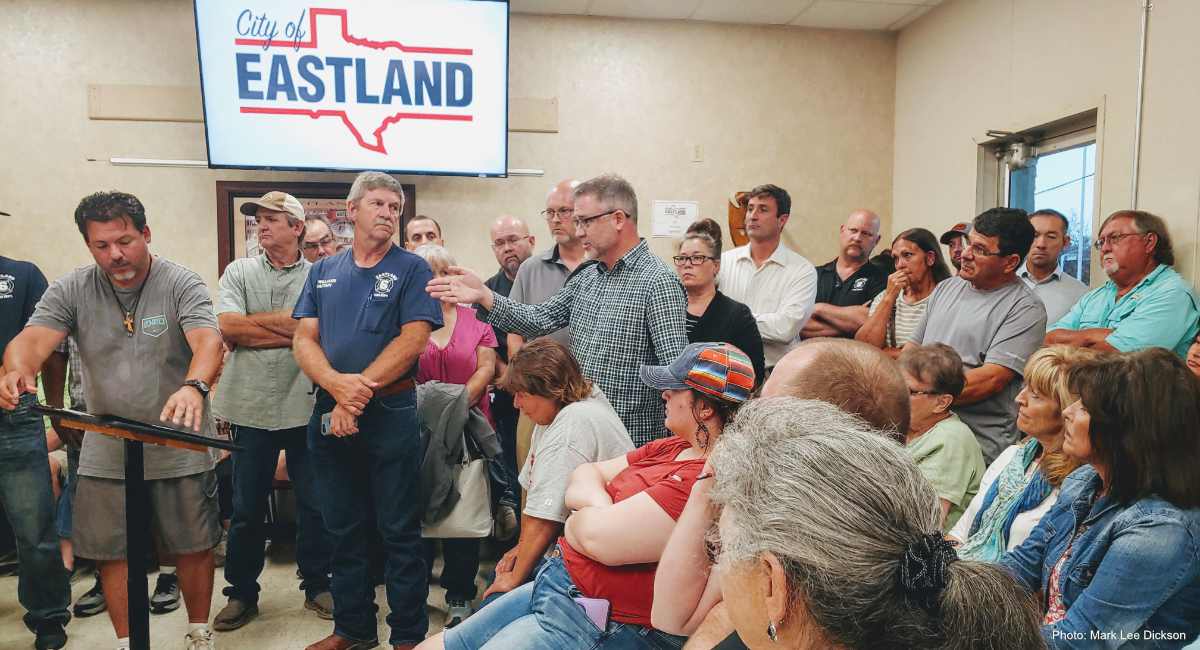 Eastland, Texas (pop. 3,970), is now the 34th city in the nation (and the 31st in Texas) to pass an enforceable ordinance outlawing abortion within its city limits. After the unanimous 5-0 vote, City Commissioner Zac Darr said, “Let’s speak the truth, an unborn child is a child. Once life enters the womb that life must be protected. This ordinance prevents abortions from happening in our town. Abortion is a travesty, and it should not have been allowed to happen – ever! Here in Eastland we will not allow the killing of innocent human beings – regardless of whether those human beings are inside or outside the womb.”

Pastor Jerry Maston of River of Life Church in Eastland was one of the many citizens who worked towards the outlawing of abortion in his city. Maston first got involved in the movement when the discussion first came before the City of Abilene in July of 2019, just a month after the passage of the first local abortion ban in Waskom, Texas. When the discussion of the possibility of abortion being outlawed in Eastland was raised, Maston attended every meeting related to the effort.

“Abortion is nothing less than taking the Life of an unborn, innocent baby. Abortion appears to be innocent until it is viewed. What you don’t see must be blameless, but when it is observed it is as hideous as torturing any human being until they die,” Maston said. “Proverbs 6:17 clearly states that God hates hands that shed innocent blood. If we fail to speak in regard to this, and strongly stand against it, we become guilty as well.”

Another Eastland resident involved in the effort was Robin Hayes, County Chair for the Eastland County Republican Party. Not only did Robin help lead the charge in getting petition signatures in Carbon and Gorman — two other cities in Eastland County which outlawed abortion — she also was able to get several pharamacies in her area to voluntarily remove Plan B from their shelves.

Even though the effort to outlaw abortion had begun among residents of Eastland in 2019, the discussion did not come before the City Commission until June 21, 2021, when Commissioner Darr, with the support of Commissioner Richard Rossander, had the ordinance placed on the agenda for consideration. At that meeting, the City Commission voted 5-0 in a procedural vote which directed the Eastland City Attorney to work with a Director from Right To Life of East Texas on an ordinance to the Commission’s liking.

On July 19, in a city hall with standing room only, the City Commission voted 4-0 in a first reading vote to enact an ordinance outlawing abortion within the city. In order for the ordinance to go into effect, it had to survive a second and final reading and vote at the next meeting. On August 4, after a second reading of the ordinance, the City Commission cast their final unanimous vote outlawing abortion within the city limits of Eastland.

The Eastland ordinance states, “It shall be unlawful for any person to procure or perform an abortion of any type and at any stage of pregnancy in the City of Eastland, Texas” and “It shall be unlawful for any person to knowingly aid or abet an abortion that occurs in the City of Eastland, Texas.” Abortion is defined by the ordinance as “the act of using or prescribing an instrument, a drug, a medicine, or any other substance, device, or means with the intent to cause the death of an unborn child of a woman known to be pregnant.” The Ordinance is clear that the term does not include birth control devices or oral contraceptives. The Ordinance is also clear that the act is not an abortion if the act is done with the intent to “save the life or preserve the health of an unborn child” or to “remove a dead, unborn child whose death was caused by accidental miscarriage” or to “remove an ectopic pregnancy.”

Like other Sanctuary City for the Unborn ordinances, the Eastland Ordinance has two major enforcement mechanisms: public and private. The public enforcement mechanism establishes fines against the abortionist and anyone who aids and abets the abortionist for any abortion which takes place within the City limits of Eastland. The ordinance is clear that these fines cannot be imposed unless it is determined by a state or federal court that the individual seeking to impose the penalty upon the one who committed the unlawful act will not create an “undue burden” on women seeking abortions, a state or federal court determines the person, corportation, or entity who committed the unlawful act of abortion lacks standing to assert the third-party rights of women seeking abortions in court, or the Supreme Court overrules Roe v. Wade and Planned Parenthood v. Casey. This is only one section of the ordinance and the enforceability of this one section is not immediate, but dependent upon other factors.

Under the section entitled “Private Enforcement” the Eastland Ordinance states, “Any person . . . may bring a civil enforcement suit against a person or entity that commits or intends to commit an unlawful act.” This part of the ordinance is immediately enforceable and allows for anyone, including any relative of the unborn child, to sue the abortionist or anyone who aids and abets the abortionist for the death of the unborn child. 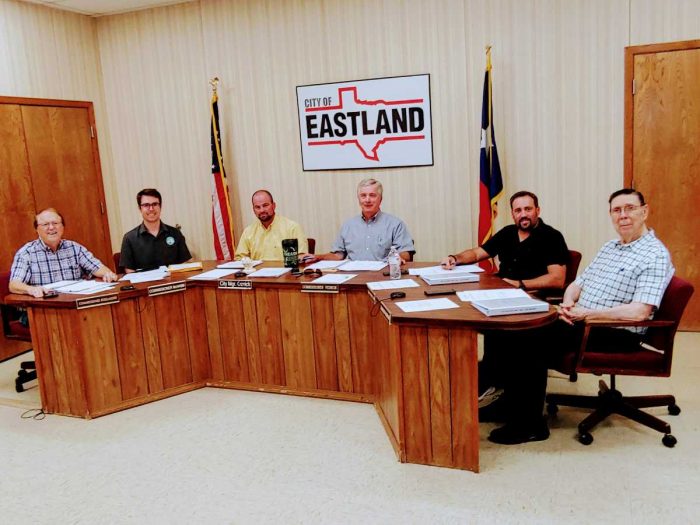 Eastland follows the Texas cities of Levelland (pop. 14,582), Sundown (pop. 1,397), Sterling City (pop. 888), and Centerville (pop. 892) as the fifth city to outlaw abortion since a lawsuit by Planned Parenthood against the City of Lubbock was dismissed in Federal Court. If the City of Eastland does face any litigation as a result of the passage of the ordinance Attorney Jonathan F. Mitchell, the former Texas Solicitor General, has agreed to represent the city of Eastland at no cost to the city and taxpayers.

It is highly unlikely that Eastland will be the last city to pass an ordinance outlawing abortion.

On Monday the City Council of Hillsdale, Michigan, voted to send the Hillsdale Ordinance Outlawing Abortion to a special city council committee where it will be reviewed before it returns to City Council for further consideration.

On Tuesday the City Council of Odessa, Texas, discussed the possibility of placing the ordinance outlawing abortion on the ballot in November to let the citizens decide. While four of the seven members of the city government were in favor of placing the ordinance on the ballot to let their citizens decide, only three of the four were for the measure to be placed on this year’s ballot.

The Sanctuary Cities for the Unborn Initiative has gone to great lengths to make sure that each ordinance is carefully drafted in accordance with all local, state, and federal laws. For this reason there does not exist any recommended text or model ordinances by which cities can simply fill in the blank. Those who are interested in seeing abortion outlawed in their community are encouraged not to start in their city hall, but in their homes, their neighborhoods, and their churches collecting signatures through the sharing of online petitions.

If a city lacks the support needed to move forward outlawing abortion then drafting an ordinance and all of the unique documents which come alongside such an ordinance is viewed as a waste of time, money, and resources for everyone involved. This is why the Sanctuary Cities for the Unborn Initiative has made it a rule not to draft ordinances unless there is direction from a member of city leadership that is ready to consider such an ordinance or there is enough support locally to merit such an action.

When proper direction is received both from the community and from legal counsel with Sanctuary Cities for the Unborn Initiative, the ordinance is then drafted specifically for the unique city, making sure that the ordinance being drafted aligns with their city charter and works within all local, state, and government laws. At that time accompanying documents are also drafted specifically to the unique ordinance and delivered to the appropriate parties.

Making sure the narrative is accurate in the media is also important to the process as one of the greatest mistakes that cities make in considering the initiative is when they focus so much on their own city that they fail to notice the many cities which have already gone before them and the lessons which have been learned throughout the effort.

Including Eastland, there are now 34 cities across the U.S. which have passed ordinances outlawing abortion: 31 in Texas, two in Nebraska, and one in Ohio. More cities throughout the United States are expected to consider outlawing abortion within their jurisdictions in the weeks to come.