A federal judge has dismissed a Planned Parenthood lawsuit against the City of Lubbock for passing an ordinance outlawing abortion within its city limits. The lawsuit was dismissed for lack of jurisdiction and lasted only 16 days.

It all started on Monday, May 17th when Planned Parenthood of Greater Texas Surgical Health Services and G. Sealy Massingill M.D. filed a lawsuit in the United States District Court for the Northern District of Texas in order to challenge the City of Lubbock’s Ordinance Outlawing Abortion which had recently been adopted in a landslide election on May 1st, 2021. Out of a total of 34,260 votes cast, 21,400 votes (62.5%) were in favor of the ordinance and 12,860 votes (37.5%) were cast against it. The City of Lubbock was the 26th city in the nation and the 24th city in the State of Texas to pass an ordinance outlawing abortion.

Planned Parenthood argued that the Lubbock Sanctuary City for the Unborn Ordinance “imposes substantial liability on anyone who procures, performs, aids, or abets an abortion in Lubbock, be it a doctor, nurse, relative, friend, or stranger. It invites any Texas citizen to obtain an injunction against anyone who plans to procure, perform, aid, or abet an abortion. It permits these lawsuits at any time, and bars providers from citing the patient’s consent as a defense.”

The complaint also argued, “The legal and financial risk to the health center and to its personnel personally is too great” and said that “[e]ven if they were to successfully defend against a civil suit, the litigation costs from the barrage of civil lawsuits encouraged by the ordinance would be crushing. Indeed, the Ordinance has already forced Plaintiffs to cancel abortion-related appointments to avoid potential liability.” 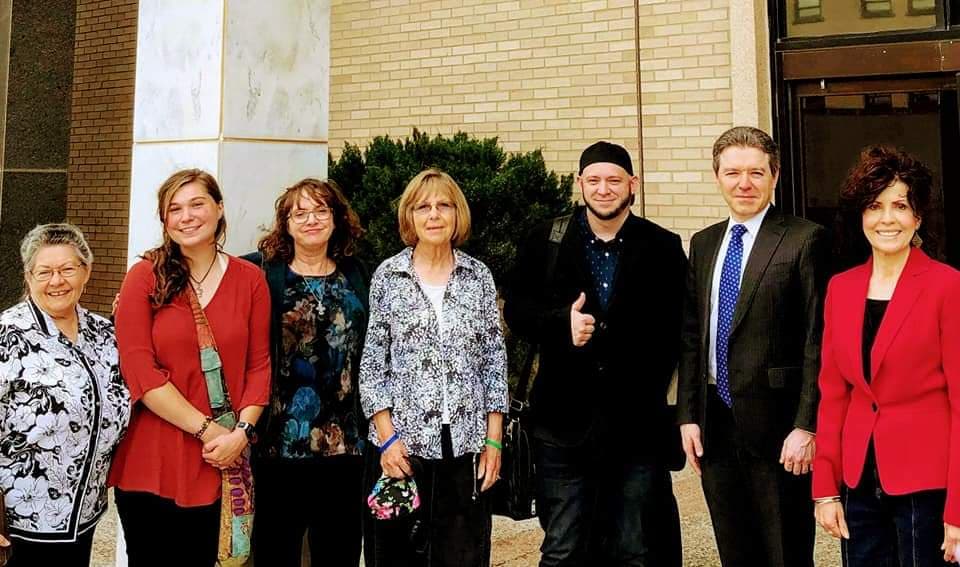 Ruth York with Texas Family Defense Committee, Nikki Allen, T.K. Allen, and Dorothy Boyett with West Texas For Life, Mark Lee Dickson with Right To Life of East Texas, Attorney Jonathan Mitchell, and Gloria Toti with Trinity Church Lubbock pose for a picture together after the May 28th court hearing in Lubbock, Texas. Mitchell submitted a brief of amici curiae before the court on behalf of these and several other groups. Photo courtesy of Mark Lee Dickson.

Upon filing the lawsuit, Planned Parenthood of Greater Texas President and CEO Ken Lambrecht shared, “Lubbock’s controversial new ordinance violates our patients’ constitutional right to access abortion and we are expecting the court to stop this unlawful ordinance.”

When the news broke regarding the lawsuit against the City of Lubbock over the abortion ban, a Director with Right to Life of East Texas was quick to chime in. “This lawsuit is frivolous and directly foreclosed by the Fifth Circuit’s ruling in Okpalobi v. Foster. The federal courts have no ability to prevent private litigants from suing abortion providers under a duly enacted law, and there is nothing a federal court can do to stop private citizens from suing to enforce this ordinance.”

On May 18th, Judge Wesley Hendrix issued an order demanding that attorneys for Planned Parenthood brief the Okpalobi v. Foster case before he handed down his ruling. Okpalobi v. Foster was a 2001 ruling in which abortion doctors preemptively sued government officials in Louisiana to block a law that created a private tort remedy [damages for women and children injured by abortion]. The Fifth Circuit ruled that the abortion industry did not have standing to bring the lawsuit.

The attorneys for the City of Lubbock filed their brief for the Planned Parenthood lawsuit against the ordinance arguing, “Plaintiffs lack standing to challenge the Ordinance under binding precedent,” and that the “Court should dismiss this case with prejudice for lack of jurisdiction.”

Lubbock’s attorneys argued that the Fifth Circuit precedent of Okpalobi v. Foster required the dismissal of this case for lack of jurisdiction stating, “There, as here, abortion doctors and clinics preemptively sued government officials to block a law which created a private tort remedy . . . The law provided for unlimited tort liability [damages] for women and their unborn children injured by abortion . . . Those plaintiffs, like these plaintiffs, argued that the law would force them to cease providing abortions because of the potential exposure to civil damages claims under the law, and that the law created an undue burden on women’s right to abortion . . . A majority of the en banc Fifth Circuit held that the plaintiffs lacked standing and remanded the case for dismissal.”

The attorneys for Planned Parenthood filed their brief arguing, “Plaintiffs will suffer injury in fact: they will be prevented from pursuing their mission of providing affordable, comprehensive reproductive health care, including abortions, in Lubbock.” 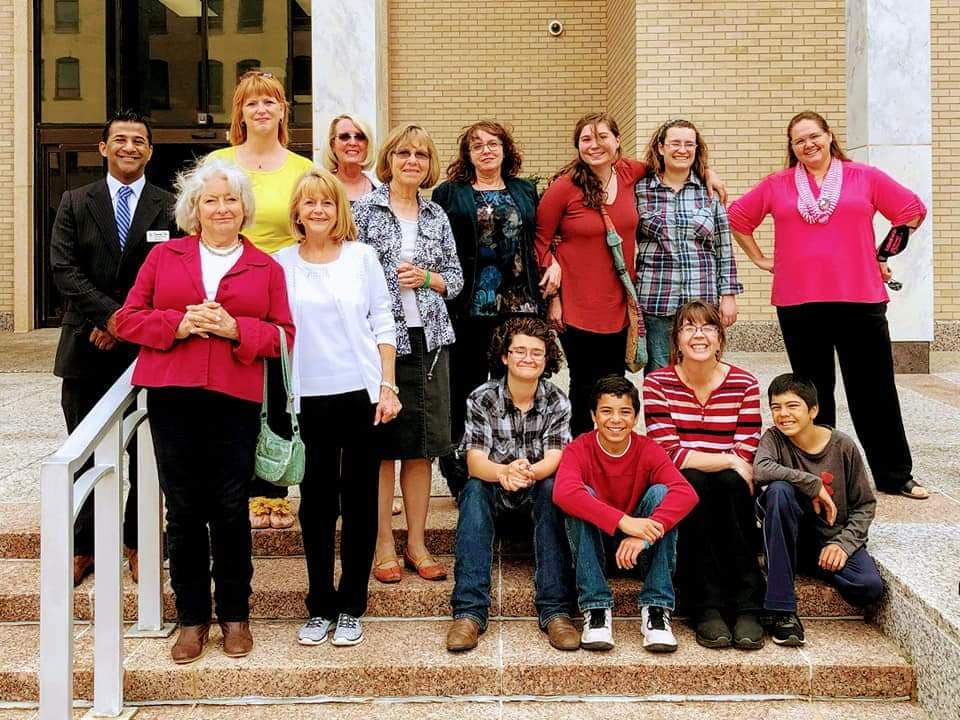 Lubbock residents pose for a picture after the May 28th Court Hearing. A Planned Parenthood supporter also chose to join in on the group picture. Photo courtesy Mark Lee Dickson.

On May 25th Jonathan F. Mitchell with Mitchell Law based out of Austin, Texas filed an amicus brief representing several individuals and groups throughout Texas and the United States which had been involved in the initiative to see the City of Lubbock outlaw abortion. He argued, “The plaintiffs appear to think that a ruling from this Court that pronounces the ordinance unconstitutional will somehow erase or formally revoke the ordinance itself—as if this Court holds a veto power over legislation or operates as a Council of Revision. But the judicial power extends only to resolving cases or controversies between litigants . . . A court has no power to cancel or ‘strike down’ an ordinance, and the ordinance will continue to exist as city law no matter how this Court rules on the plaintiffs’ claims for declaratory and injunctive relief. The ordinance will also remain available for private citizens to use in state-court lawsuits against the plaintiffs or anyone else who violates the ordinance—even if this Court gives the plaintiffs everything that they ask for.”

Later that day, Judge James Wesley Hendrix called for a public hearing to be held on the jurisdictional issue on Friday, May 28th. Judge Hendrix invited both parties involved in the lawsuit to file briefs in response to the amici curiae brief submitted by Mitchell if they so chose to do so. Judge Hedrix wrote, “The parties and amici raise important points for consideration in the Court’s resolution of the threshold jurisdictional issue. In light of the briefing and given that a finding of no jurisdiction would be case-dispositive, the Court finds that a hearing on the matter would be helpful to the Court and would give the parties an opportunity to address the Court’s questions.”

On May 28th the attorneys for Planned Parenthood, the City of Lubbock, and the Amici presented their arguments before the court. At the close of the hearing, Judge Hendrix recognized that this was a time-sensitive issue and assured the parties that he would do his best to render a ruling as soon as possible

A few days prior, on May 26th, Judge Hendrix had invited the Office of the Attorney General of Texas to weigh in on their views regarding some of the questions raised by the case in relation to state law. On May 31st, Judd Stone, the Solicitor General of Texas accepted the invitation of Judge Hendrix and released a seven-page letter addressing some of the questions raised by Planned Parenthood v. the City of Lubbock.

“In our view, Planned Parenthood has not shown that Lubbock’s ordinance is inconsistent with state law.” General Stone wrote, “As an initial matter, the Texas Legislature has clarified that state law does not prevent cities like Lubbock from imposing regulations like those that Planned Parenthood challenges.”

General Stone noted, “Planned Parenthood has not identified a statute that ‘explicitly states that political subdivisions are prohibited from regulating or prohibiting abortion’—let alone one that prohibits the type of regulations at issue here . . . The Office of the Attorney General believes that state law is clear enough for this Court to reject Planned Parenthood’s claims on the merits.”

June 1st came with much rejoicing in the Lubbock pro-life community. The ordinance was officially in effect and Planned Parenthood ceased performing abortions at the Lubbock facility. Their website read, “Due to a controversial, unconstitutional ordinance passed on 5.1.21, Lubbock residents are currently required to travel outside of Lubbock to access safe, legal abortion. We are in court to prevent this ban from continuing.”

Despite not receiving a ruling from Judge Hendrix by the morning of June 1st, many Lubbockites already felt as though they had won. Because of the Sanctuary City for the Unborn Ordinance, lives were being saved from abortion in their city.

Judge Hendrix’s ruling came late on the night of June 1st, and his ruling was viewed as a victory for many across the pro-life community. In a fifty-page court decision, which can easily be summed up in one quote, Judge Hendrix wrote, “Because plaintiffs fail to show, as they must, that they have Article III standing to sue the city, the Court dismisses the case for lack of jurisdiction.” Life won in Lubbock, Texas.

A total of twenty-nine cities have passed ordinances outlawing abortion in the United States. Of those twenty-nine cities which have outlawed abortion, twenty-six are in Texas, two are in Nebraska, and one is in Ohio. The next city which may outlaw abortion and join the growing number of cities in the Sanctuary Cities for the Unborn Initiative could be the City of Levelland, Texas. On Monday, May 17th, the night that the City of Lubbock was sued, the City Council of Levelland voted to move forward with outlawing abortion within their city limits. If the Levelland Ordinance Outlawing Abortion survives a second and final reading on June 7th they will become the thirtieth city in the nation to outlaw abortion and the twenty-seventh in the State of Texas.