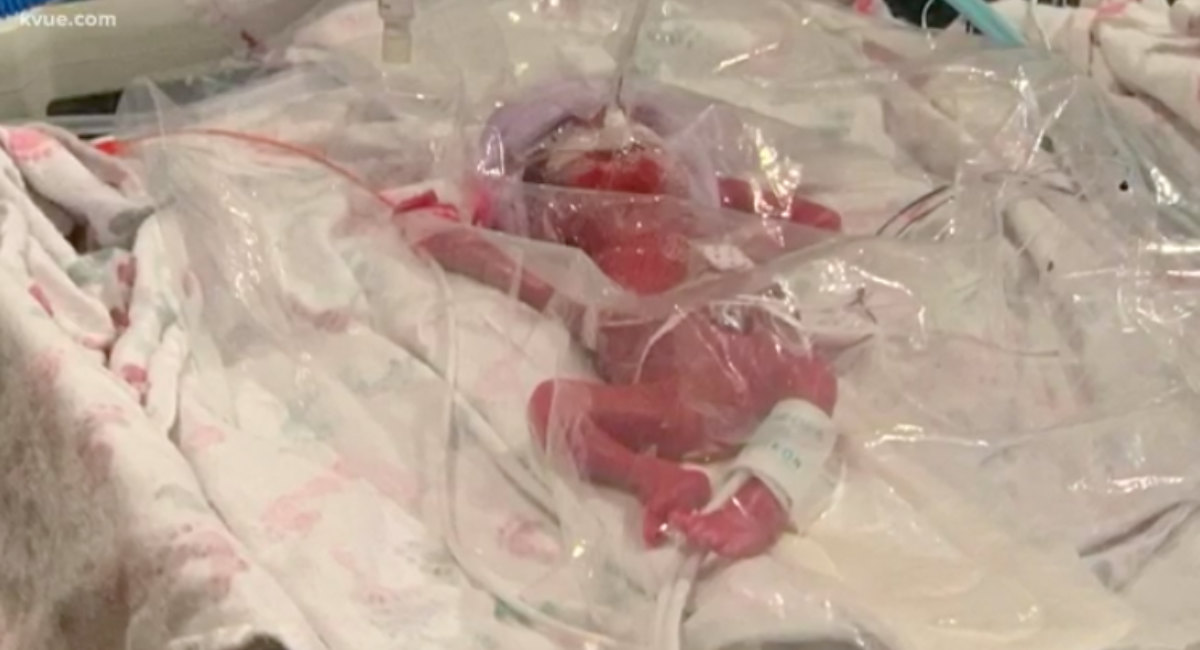 During the crippling winter storm in Texas on February 17, a baby girl named Zaylynn was born at just 24 weeks gestation at a hospital in Texas that was not well-equipped to care for such a premature baby. That’s when a team of doctors and nurses came together to try and save the baby girl despite the chaotic weather.

According to Good Morning America (GMA), Zaylynn was born at Baylor Scott & White on the morning of February 17 after her mother Kimberly Arias began having contractions. Zaylynn was born quickly and weighed just one pound, six ounces. She was placed on a ventilator while the search began for a medical transport team to fly or drive her through the storm to a neonatal intensive care unit at a better-equipped hospital. Baylor Scott & White is a Level 1 hospital and could not provide adequate care for the baby, who was given a 50% chance of survival. Normally, she would have been transferred, but the storm prevented that.

“We had five or six people out at the nurses’ station calling hospital networks all over the state of Texas,” said Meredith Schubert, a labor and delivery nurse on duty that morning. “Nobody could answer our cry for help.”

The team finally reached Dr. John Loyd, division neonatologist chief at Dell Children’s Medical Center in Austin. He was in the middle of attempting to arrange transport for another baby when he learned about Zaylynn.

“The Baylor Scott & White team had done an amazing job well out of their scope of their routine practice to get a breathing tube in, to provide IV glucose and to keep this baby warm,” he told GMA. “I knew that they needed help and more importantly the baby and the family needed help so I decided I was going to go.”

By five o’clock that evening after a full day of work, Loyd filled his SUV with medical equipment and drove with two NICU nurses to Baylor Scott & White, about 55 miles away. It took them twice as long to get there as it should have because of the weather. As the team at Baylor Scott & White awaited their arrival, Dr. Curtis Copeland, a family medicine physician who was caring for Zaylynn, FaceTimed with NICU teams at other hospitals to figure out how to best care for Zaylynn and keep her alive. Loyd called her “probably the most vulnerable patient in the state of Texas.”

“I think my jaw was on the floor,” said Schubert when she learned Loyd was driving to them. “I knew Dr. Loyd from previous employment and I knew what kind of guy he was and when I heard he was coming, it was just a huge feeling of relief.”

They all worked together well after their shifts were over, and even the cafeteria opened after hours to feed Loyd and his team. Twenty-four hours later, with the weather cleared up, Zaylynn was flown by helicopter to Dell Children’s.

“It was incredible when the helicopter lifted off,” said Schubert. “There were tears from all of us. It was a huge relief and sense of accomplishment and joy, that she was doing so well and getting to the place that she needed to be.”

Zaylynn’s mother was discharged shortly after and is staying at a Ronald McDonald House at Dell Children’s where Zaylynn is expected to remain for the next few months.

“They made me feel like my baby was really safe and in good hands,” she told local ABC station KVUE-TV. “Honestly, I didn’t get much sleep, but the few hours I got, I could be calm because I knew someone was there with my baby.”

Loyd noted that premature babies are usually in the NICU until their due date. “Zaylynn’s chance of survival at this point is very good and her chance of her growing up and going to school and having friends and growing up and getting a job and all those things that we want our children to do, is very good.”

He added that “this is what health care really should be all about, which is, how can we go help?” He said he would not have been okay with himself if he didn’t do something when he knew he could.

“Everyone else did the same thing,” he explained. “They rallied. They colored outside the lines. They worked flexibly with each other, and because of that, little Zaylynn has a very reasonable chance of surviving and doing all the things we as parents want our children to do.”

Though babies born as young as 21 weeks have survived and are thriving, the United States allows abortion right up until delivery for any reason. So while some medical teams are working to kill babies of the same age simply because of their location in the womb, this team of doctors went above and beyond, braving a historic winter storm to save one baby born at 24 weeks.