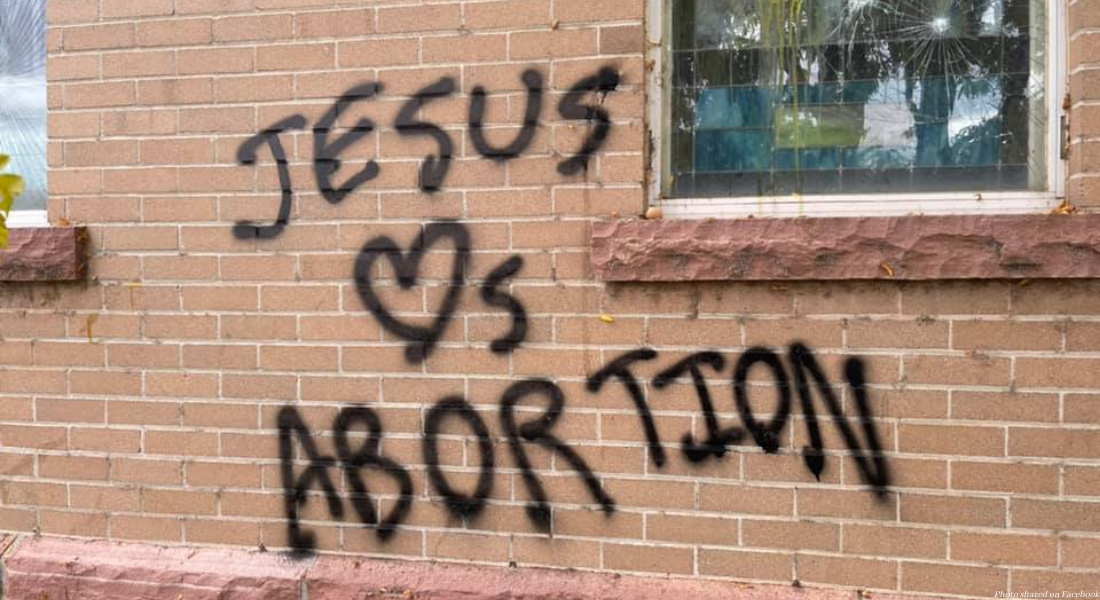 A Catholic church in Boulder, Colorado, was attacked by pro-abortion extremists in the middle of the night, seemingly in response to a pro-life display. Sacred Heart of Mary Parish had erected 4,000 small white crosses on its front lawn, to represent the number of preborn children killed in abortion each day in the United States, only for the display to be destroyed and the church vandalized.

In the early night of September 29, unknown vandals spray-painted symbols all over the church property, including “Jesus [Loves] Abortion,” “Bans off our bodies,” “No Wire Hangers Ever,” and a symbol combining an “A” signifying “anarchy” and the traditional symbol for “female.” Mark Evevard, Youth Director and Social Communications Director for Sacred Heart of Mary, posted photos of the damage on Facebook.

In addition to the graffiti, the white crosses were trampled on and desecrated. The assailants also tried to smash the stained glass windows, threw eggs at the doors, and deflated at least one tire on the church’s truck.

Evevard told the Catholic News Agency that the parish does have a security system, but all it captured during the attack was shadows. He also said the pastor, Fr. Jonathan Dellinger, is encouraging people to pray for those responsible.

Still, Evevard admitted the damage was difficult to take.

READ: The Catholic Church is correct in not letting the abortion issue slide

“It was a lot worse than I thought it would be,” he told CBS4. “Seeing the church and the front doors of the church, and the side of the church, that was kind of saddening seeing that.”

According to the Archdiocese of Denver, over 20 parishes have been victims of some kind of crime over the last year and a half. “It’s kind of a sad reminder of the world we live in today,” Evevard said. For now, 9News reported that the parish wants to let the damage stand so the community can see what happened.

Churches have been attacked numerous times throughout the world by abortion extremists. Some have even gone so far as to try to burn down a cathedral, as abortion activists did in Mexico City. It’s sadly become a regular occurrence, with churches frequently spray-painted or attacked. Recently, abortion activists even invaded a Catholic Mass and had to be forcibly removed by police.