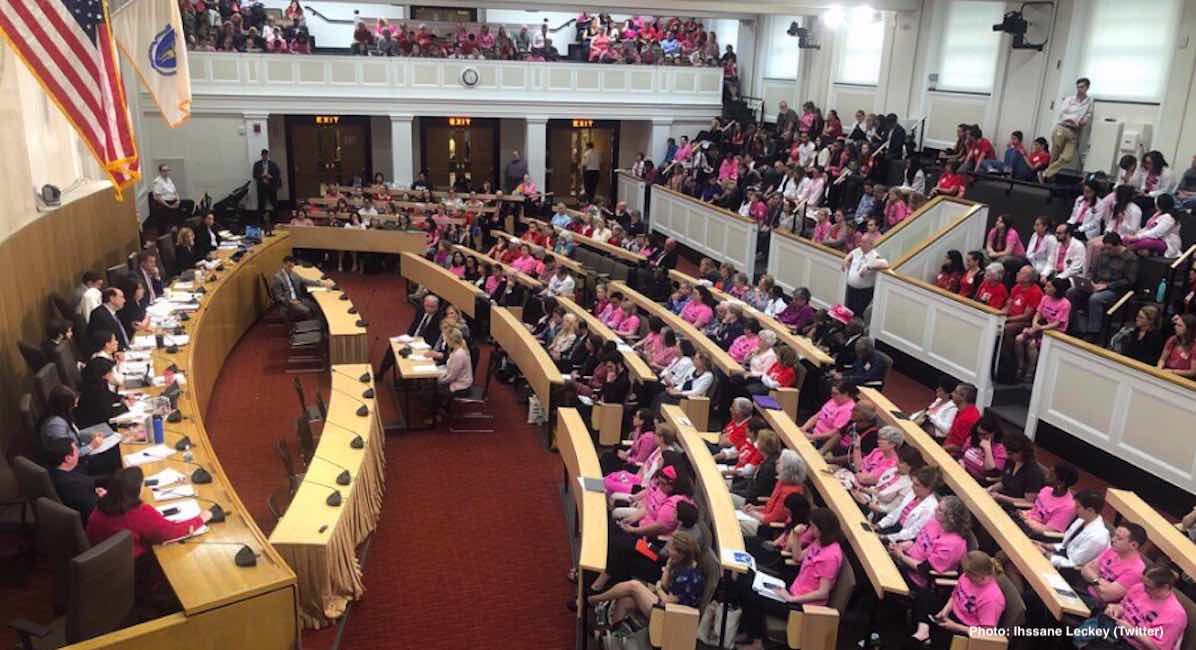 As the State House in Boston heard testimony on Monday about whether abortion should be expanded in the Commonwealth of Massachusetts, pro-lifers and abortion supporters gathered by the hundreds outside.

An Act to Remove Obstacles and Expand Abortion Access, nicknamed the ROE Act, is being pushed by NARAL Massachusetts, the American Civil Liberties Union, and the local advocacy chapter of abortion giant Planned Parenthood, who would profit from the law. The act would permit abortion from “conception to crowning,” says Liberty Counsel, and would eliminate common-sense measures such as parental consent, waiting periods, reporting requirements, or provisions for any babies who survive abortion. As Live Action News reported yesterday, the ROE Act allows for infanticide, removing a current state law requiring doctors to give medical aid to abortion survivors. The act also allows for abortions past 24 weeks, otherwise considered the point of viability where a baby born alive could survive with NICU support. The wording of the law allows for late-term abortion for virtually any reason.

Pro-lifers donned red to protest the act, while abortion supporters wore pink. Many of those supporters were from Planned Parenthood and the ACLU, according to various Twitter users. Pro-lifers’ shirts declared “Faith, Family, Freedom; Choose Life.” They held signs such as “A pregnant woman needs support, not abortion,” as Pentecostal minister and pro-life activist Eugene Rivers addressed the crowd. “The bottom line is we oppose this because it is war against the most defenseless,” said Rivers, according to WCVB. “We are pro-life from the womb to the tomb.”

MassGOP chairman Jim Lyons was present at the protest, having released a statement earlier in the day. The statement read, in part: “The Infanticide Act shreds the last vestige of family connection, as it mandates that our youngest teenagers can access abortion without ever consulting family or parents. Clearly, this extreme measure constitutes an all-out assault on both life and family.”

One of the organizers of the rally, Chanel Prunier, spoke out against allowing dangerous late-term abortions outside of a hospital setting. “There’s no good reason to take them out of a hospital except Planned Parenthood’s bottom line,” Prunier said, according to WBUR.

Some abortion supporters dressed in costumes from “The Handmaids Tale,” a dystopian novel and TV series in which some women are enslaved to be “breeders.” One such protester held a sign featuring a coat hanger that read, “There will be blood,” likely referring to the fabricated statistics on the “thousands” of women who allegedly died every year from illegal abortion before Roe. These figures were falsified by then-abortionist and NARAL founder, Bernard Nathanson, and have been repeated often by Planned Parenthood’s president. The Washington Post recently fact-checked the claim, giving it four Pinocchios.

In Massachusetts, while protesters were gathered outside, some lawmakers were having difficulty coming to grips with one aspect of the ROE Act: the elimination of parental consent. Even one of the lead sponsors of the bill, Patricia A. Haddad, had problems with it. “I’d lose my mind if one of [my granddaughters] turned up pregnant and went off and had an abortion without a family member or somebody there with her,” she told the Boston Globe, but acknowledged that some minors have no parental figures in their lives.

She did not tell the Globe why the judicial bypass process, already in place for such circumstances, was apparently not fulfilling this need. She also did not address the fact that teens without parental figures are vulnerable to coercion and the cover up of sexual abuse.