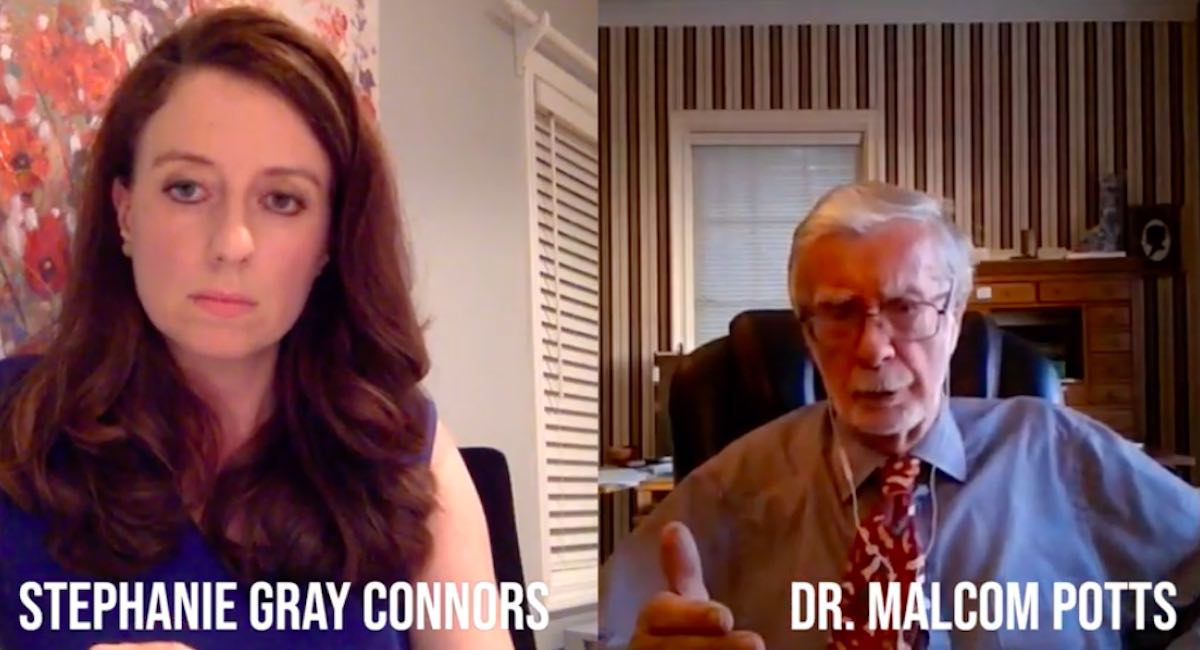 When introducing himself, Dr. Potts, a Cambridge-educated obstetrician and an abortionist, described his experience as one of the first people to use an electron microscope to view mammalian embryos, including human embryos. He was, he claimed, the first person to see a human embryo attach to the uterine wall. Dr. Potts noted that his study of embryology made him different than most abortionists and he said abruptly, “I know what it is that I have been destroying.”

Gray Connors has spoken internationally on pro-life topics over the past two decades and has previously debated pro-abortion people, including Dr. Potts. Gray Connors began by acknowledging that saying abortion is wrong is a “difficult position to argue.” She said this is not because of a lack of reasons to support it but because of the intense emotions that often surround discussion of abortion. The main reason for this, she said, are the difficult circumstances that often surround an abortion decision and the number of people who have undergone an abortion or participated in one.

Gray Connors clarified that when she affirmed that abortion is wrong, she was not condemning people who have been involved with abortion but rather arguing that the act of abortion is wrong. She gave the example of texting and driving as reckless behavior that can cause serious harm. If a friend caused an accident by texting while driving, we would condemn the reckless behavior that led to the accident while still loving and supporting our friend. Gray Connors’ claim that she was arguing against the act of abortion and not making ad hominem attacks was supported by her long-standing relationship with Dr. Potts with whom she has talked for many years.

She went on to lay out the societal expectations of parents to provide basic care—food, shelter, clothing, love—to their children. She also noted that internationally, the preborn child is recognized as a separate and innocent human life, which begins at the moment of fertilization.

In his opening statement, Dr. Potts claimed that he wanted the “least amount of suffering” possible in the world. Contrary to the data, Potts claimed that making abortion illegal will not decrease the number of abortions. According to Potts, the fact that some mothers in desperate circumstances will resort to extreme measures to undergo an illegal or self-induced abortion means that legalizing the killing of preborn children will reduce suffering. His argument is neither supported by the data nor does it take into account the shoddy treatment of mothers by the legal abortion industry.

During his opening statement and at many times in the debate, Potts accused Gray Connors of being “unnecessarily emotional” in calling the human being in the womb a “preborn child,” even thought the term is accurate. Yet Potts, the only person in the debate who displayed visible emotion at several points, called the preborn child at early stages of development “aggressive” and “cancerous.” Without in any way refuting Gray Connor’s carefully articulated explanation of embryonic development and personhood, Dr. Potts claimed absurdly, “Abortion is a healing process.” Far from healing, abortion is a violent act that dismembers a living human child.

Conflating the tragic event of miscarriage and the intentional ending of a human life through abortion, Dr. Potts claimed that the abortions he committed were for eugenic purposes. He states it was his “privilege as a doctor to do what nature may have failed to do,” and elsewhere that as a doctor he gets to “enhance what nature does.”

In her rebuttal, Gray Connors noted that simply because a certain group of people are more likely to die naturally, it does not follow that we should be allowed to intentionally kill those people.

Despite his dehumanizing description of the human embryo and willingness to commit abortions early in pregnancy, Dr. Potts stated firmly throughout the debate that he was “very uncomfortable doing abortion after 12 weeks.” Potts also claimed he would not be willing to commit an abortion, even before 12 weeks, if the reason was sex-selective. When pressed, Potts admitted there were other reasons he would consider “stupid and selfish” on the part of the mother and would refuse to commit the abortion.

Dr. Potts, who was partially responsible for inventing the vacuum aspirator used to dismember preborn babies in many first trimester abortions, continued to vigorously defend killing babies via abortion, despite his strong aversion to killing certain babies and killing babies later in the pregnancy. He asserted without evidence that babies in the first trimester were somehow different from babies later in pregnancy, saying he “would not lose sleep” over committing an abortion over a 12-week baby.

Like many abortion activists, Potts insisted that his concern was with women’s health. But as Gray Connors noted, he was creating a false dilemma for the mother in which abortion is her only option.

One of the most telling moments came in a discussion of ectopic pregnancy. Gray Connors asked Dr. Potts what he would do if medical technology existed to keep a baby removed from a fallopian tube alive. Potts said that he would consult the mother about what she wanted to do because it’s “her body, her uterus.” Clearly, the preborn child removed from his or her mother is not the mother and is a separate human life, as Gray Connors logically demonstrated throughout the debate. However, Dr. Potts fails to see this in the hypothetical scenario. In order to justify abortion, the killing of an innocent and defenseless child, its defenders must dehumanize the child.

In the end, the debate failed to satisfy. While Gray Connors sought to explain a coherent position, Dr. Potts made no attempt to offer consistent principles. He said repeatedly that it’s “just that I use words differently” and “we are divided by words.” Abortion, however, is not a matter of semantics and feelings. Abortion is a matter of life and death.

The success and betterment of women is not dependent on the destruction of their preborn children, and whether the abortion occurs at 12 weeks or 40 weeks, it is the violent killing of a human being.

You can watch the debate in its entirety on YouTube.