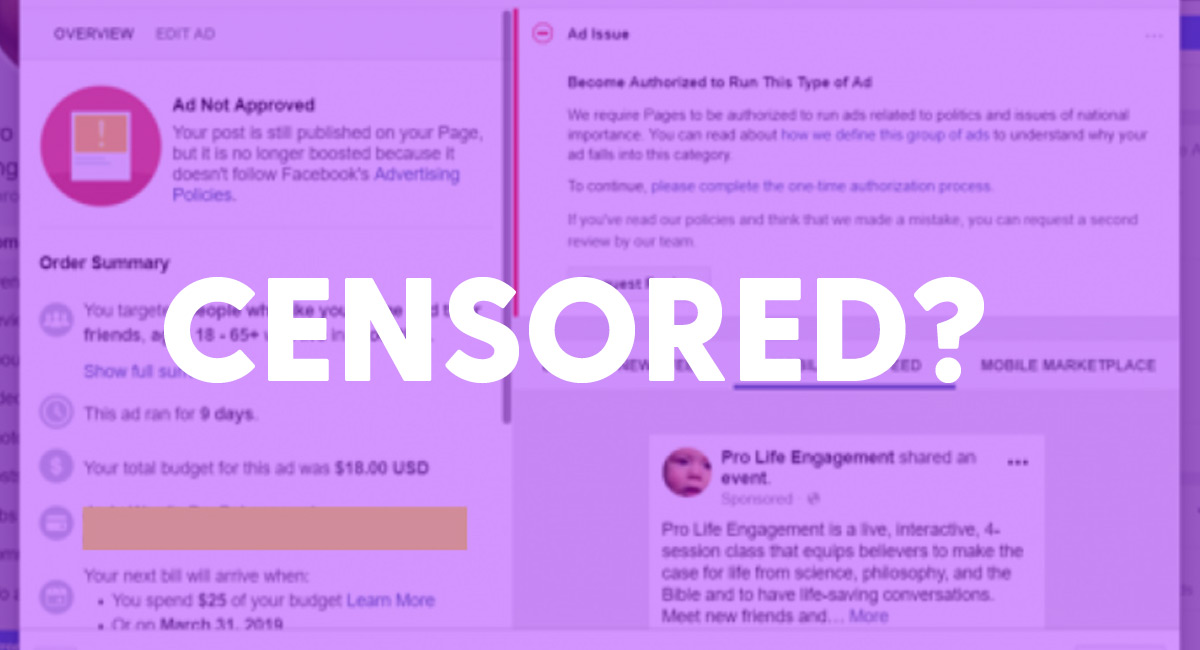 It’s no secret that Facebook is prone to censoring pro-life material from groups like Live Action. This week, LifeSite News also reported on Facebook’s pro-life censorship of a pregnancy site that showed fetal development and abortion pill reversal information. But recently, a Maryland woman discovered that Facebook’s anti-life subtext reaches even to the “little guy” when she was refused the ability to promote a pro-life educational group on her Facebook page.

Jody Ward is the woman behind the Facebook page Pro Life Engagement, which, as of this writing, has less than 100 followers. The page is a labor of love for Ward, who calls it a “small, local effort.” Pro Life Engagement began in 2016 with seven high school students, Ward explained to Live Action News. She met with them for eight separate hour-long sessions to teach basic pro-life apologetics. While the classes were biblical, they were also scientific and philosophical — and the group was not involved in political lobbying. The classes are free (the only cost is the textbook and photocopies), and in less than three years, approximately 80 students have been through the training. The classes eventually were offered bi-annually at Calvary Chapel church in Delta, Pennsylvania, Ward’s home church.

I called the class Pro Life Engagement, because my goal was to do more than just teach these students how to defend their pro-life views. I wanted them to actually engage in conversations with other people about abortion – conversations that could be life-saving. I believed that if they had just one good conversation, it would give them the confidence to have another, and another.

Ward, who holds both a B.S. and M.Ed. in education, does all the teaching and administration herself. “Pro Life Engagement is very small potatoes, really,” Ward says. And that’s why the whole Facebook battle has been so troubling to her. She says:

In early January I created an event for a class to be held in February. Almost immediately Facebook began soliciting me to advertise the event. Every day there would be a solicitation on my feed to create an ad. Sure I wanted to reach more people! Sure I was willing to spend $10 if it might help me reach more people. So I took the bait and proceeded to apply for an advertisement.

The trouble began when her ad was rejected, beginning a long, fruitless ordeal. “On January 22,” Ward said, “Facebook sent me an email telling me that my first ad was rejected. ‘We require Pages to be authorized to run ads related to politics and issues of national importance.'”

“So I ‘got authorized,'” said Ward. “This involved filling out a form on which I was required to provide my home address. That was unexpected, and pretty creepy. They would then mail a letter, containing a printed code, via USPS, to my home mailbox.” 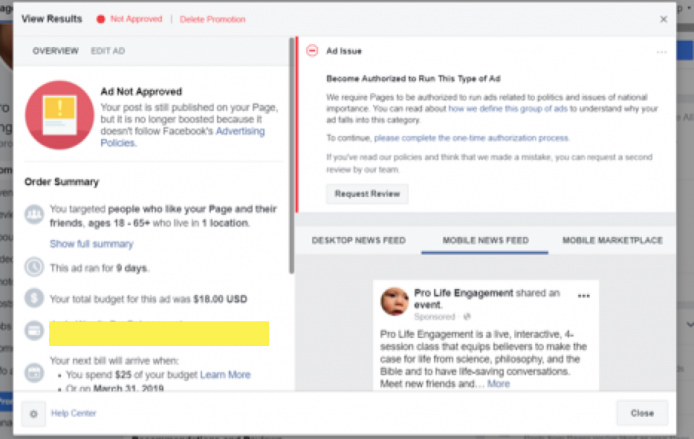 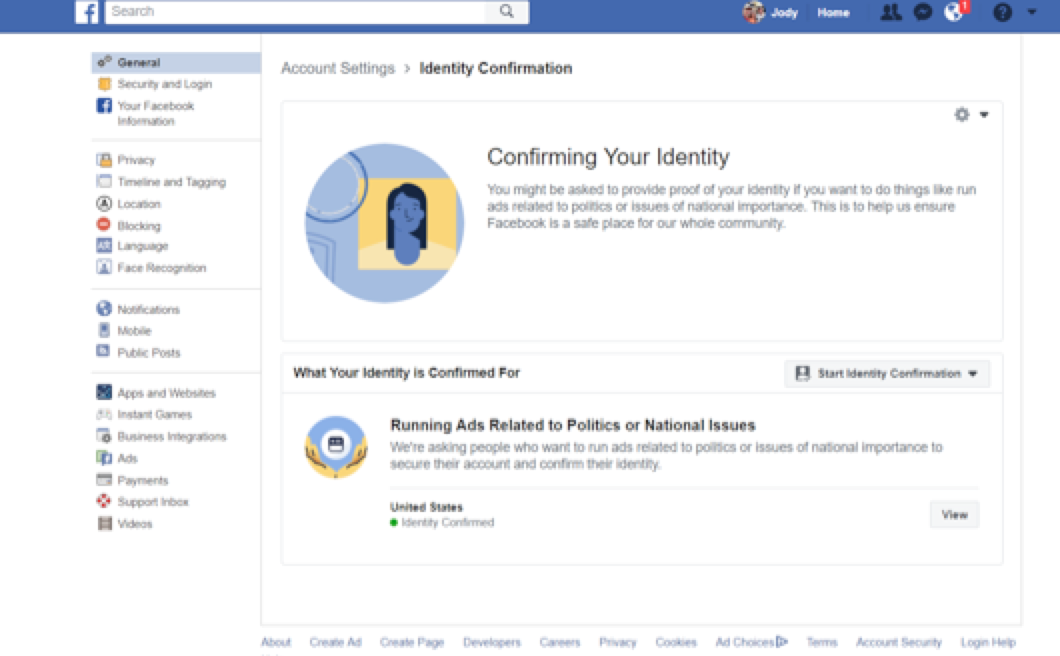 She says, “I complied. I didn’t like being required to tell Facebook where I live, but I figured that, in the internet era, there is already so much information about all of us out there that it probably didn’t make much difference.”

And it seemed to work–at first. “About 8 days later I did indeed receive a letter in my mailbox from Facebook with a code to enter. I went back online, entered the code in the right spot, and, voila! I was authorized! Or so Facebook said.” 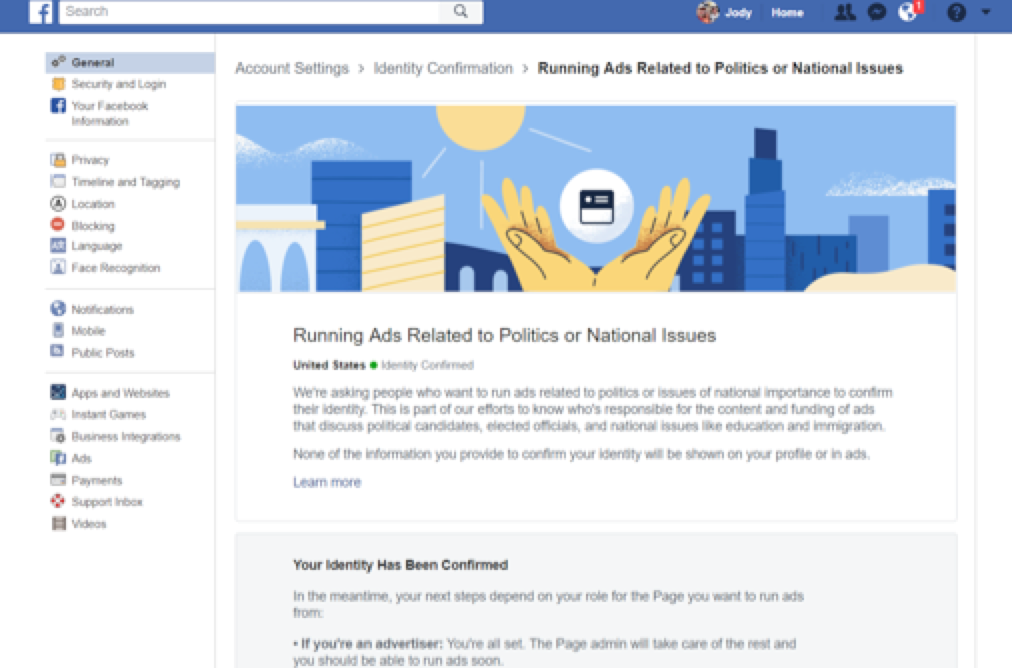 By this time, it had been so long, the class she tried to promote was about ready to begin. So Ward gave up on trying to promote it through Facebook.

But when she tried again last month to promote the next class at a different location, she was dismayed. “I assumed that, now that I had jumped through Facebook’s hoops, and surely, in exchange for even more personal information, i.e. my exact location on the planet, I was good to go.” After filling out her ad form and authorizing payment, her Valentine’s Day greeting from Facebook was an email saying, “Your ad isn’t approved because it doesn’t comply with our Advertising Policies.” Ward was upset because, she says, “I had met all of the requirements for running an ad about ‘abortion.'” She adds, “Twice now Facebook had relentlessly solicited me to pay to advertise my events. Twice they had rejected my ads. Twice they had not accepted my money to pay for advertising an educational event.”

Then about two weeks later she received an email:

To avoid disruption to your ad campaigns, please take a moment to review and accept our non-discrimination policy. Our policy hasn’t changed, but we’ve added examples about what it means for advertisers.

Ward says, “Not only do I NOT have any ad campaigns that could be disrupted, I myself, or rather Pro Life Engagement, is itself, the target of discrimination by Facebook.”

Ward, who also took part in the premiere pro-life certificate program at Oklahoma Wesleyan University in 2015-2016, earning accredited university hours in pro-life apologetics classes, said, “This best expresses the ‘progressive’ irony of Facebook’s enforcement of ‘non-discrimination’ by practicing discrimination… against… those who would speak in defense of the most innocent, the most vulnerable, the most invisible, and the most targeted humans on Earth.”

The mom, teacher, sidewalk counselor, and pregnancy care center co-founder replied to the media giant in a final correspondence:

You have rejected both of my ads, even after obtaining extensive personal information about me, simply because I used the word “abortion” in my ad.

Now you expect me to believe some fable about Facebook having a “non-discrimination” policy? Here’s a suggestion.

First, stop discriminating against good people who are trying to educate the public about and put a stop to the greatest human rights holocaust in world history – legal abortion.

Then come back and show me your non-discrimination policy.

Until then, enjoy your mythical world where only those who agree with your elitist ideology about human value have ideas worth sharing, whilst you protect the legal butchering of the most innocent and vulnerable humans on the planet at the rate of 43 million a year by denying their defenders a platform for spreading inclusiveness and love.

There has been no reply from Facebook as of this writing.