New York Times (NYT) writer Rossalyn Warren is calling for Facebook to censor pro-life news sites like Live Action News and Life News. In an opinion piece entitled, “Facebook Is Ignoring Anti-Abortion Fake News,” Warren failed to publish any credible research which would rebut a single story published by these two entities, but still thinks they need to be censored, based on her own personal bias.

The NYT describes Warren as a “journalist” but in this case, it is obvious that her pro-abortion bias has overruled everything else. Warren writes, “So far, Facebook and the public have focused almost solely on politics and Russian interference in the United States election. What they haven’t addressed is the vast amount of misinformation and evidenced stories about reproductive rights, science and health.”

To clarify, what Warren means by “reproductive rights” is abortion; what she means by “science and health” is not the truth about when life begins, when a preborn baby’s heartbeat can be detected, or any actual science about the development of the baby or the harm effects of abortion on women. No, that is conveniently ignored by pro-abortion apologists like Warren. Apparently, in an opinion piece, one doesn’t have to any present facts. 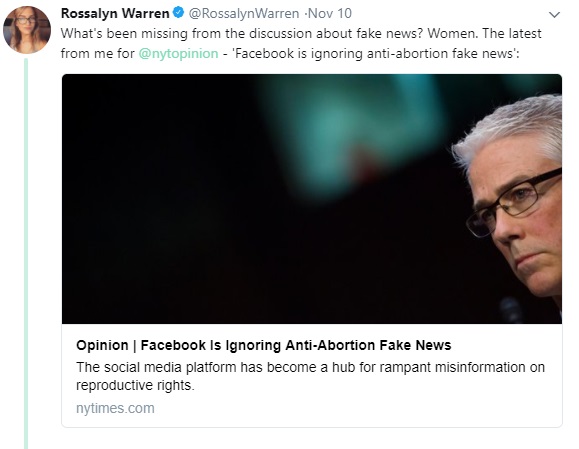 The only reasoning Warren offers for censoring pro-life outlets is the fact that Live Action recently ran a series of articles on the documentary film Hush, made by pro-choice filmmaker Punam Kumar Gill, who refused to blindly believe what she was told about the harmful effects of abortion; instead, the film documents her investigation of the claims about a link between abortion and breast cancer. Warren failed to dispute in any way the film’s research, which was heavily sourced.

To Warren, Gill’s research is “fake news” — yet Warren offers absolutely no proof whatsoever for her conclusion. Yet, ironically, in her piece, Warren criticizes a 2016 blog story on late-term abortions for “failing to cite any sources or studies.”

Warren believes pro-life news sites (already being censored by Twitter) should now be censored by Facebook because they are ideologically driven (as if her views are not):

However, the incentive for the people who write content for anti-abortion news sites and Facebook pages is ideological, not financial. Anti-abortion, anti-science content isn’t being written by spammers hoping to make money, but by ordinary people who are driven by religious or political beliefs. Their aim isn’t to profit from ads. It’s to convince readers of their viewpoint: that abortion is morally wrong….

Well, it’s hard not to view this as morally wrong, once you’ve seen it:

Warren’s use of the term “anti-abortion” is interesting, and reveals Warren’s own ideology herself — as does her Facebook page…

Here is Warren “lov[ing]” Polish women who strike against their country’s abortion ban: 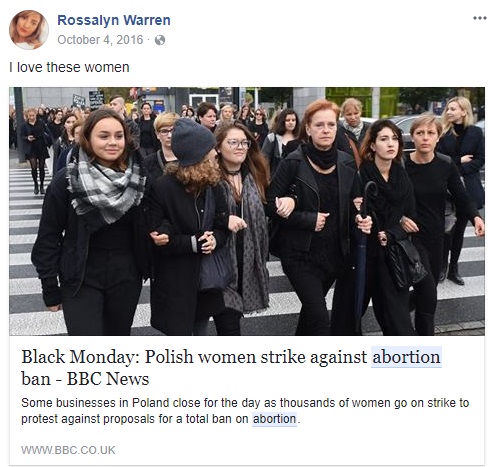 And here is Warren when Victoria (in Australia) voted to limit protests outside abortion clinics, calling it “amazing news”: 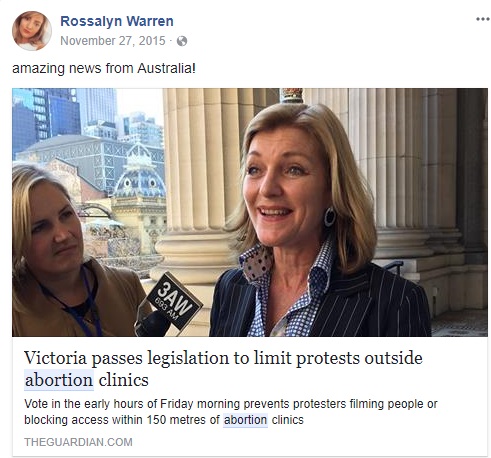 To Warren, it’s a “big deal for access to abortion”: 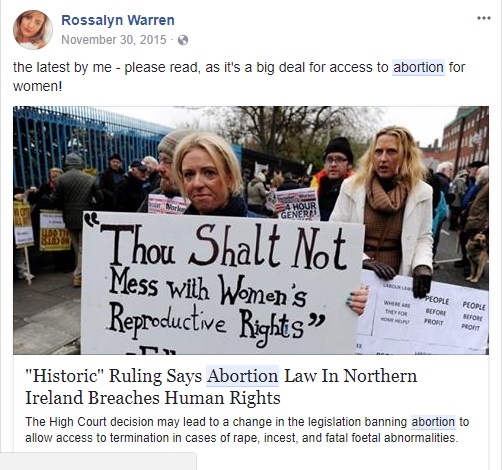 Here is Warren sharing a post from ideologically driven Think Progress, a left-wing news site that is radically in support of abortion. Warren clearly takes the pro-abortion position. (No calls from Warren for Facebook to censor Think Progress, by the way.) 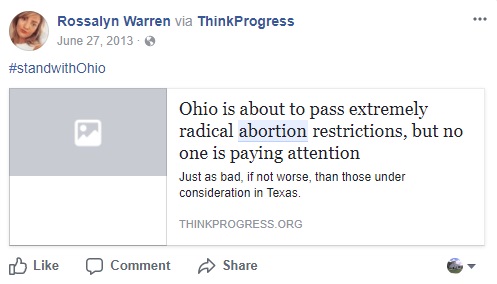 And finally, Warren seems to think “more people need to see” an image of a woman who supports the nation’s largest abortion corporation, Planned Parenthood. 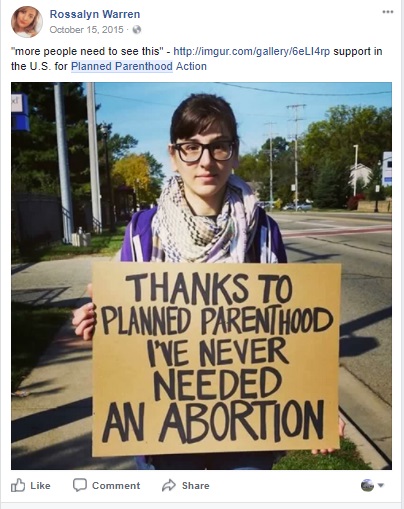 Warren, while failing to state her own pro-abortion bias, wants readers to think she is actually concerned about “fake news.” But she gives herself away when she explains why she thinks Facebook should censor pro-life speech. It’s because, as she says, pro-life sites “dominate the conversation about reproductive rights on Facebook” with what she calls “dodgy studies and scaremongering” which she believes is “drowning out people’s access to credible, researched reporting on abortion.”

Warren insists, “These [pro-life] sites produce vast amounts of misinformation,” she claims, while admitting she got her information from the pro-abortion site Media Matters. She complains (emphasis added), “… stories [from pro-life sources] often generate more engagement than the content produced by mainstream news organizations, said Sharon Kann, the program director for abortion rights and reproductive health at Media Matters, a watchdog group.”

While Warren railed against pro-life news sites for using (in her words) “thinly sourced stories,” she did exactly the same thing, using a claim from pro-abortion staff member Sharon Kann at Media Matters as “evidence” of her claims. According to Kann’s LinkedIn page, the Media Matters “researcher” volunteered for two abortion facilities: Planned Parenthood South Atlantic and the Emma Goldman Clinic. So she’s hardly unbiased. But that doesn’t seem to matter to Warren. 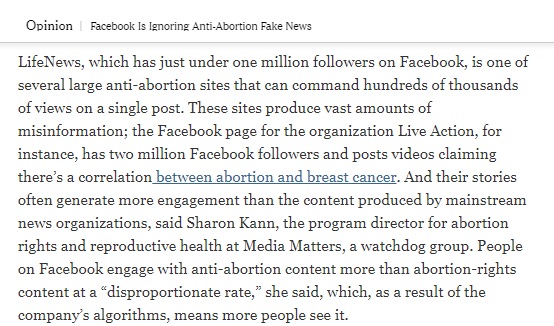 As you can see, Warren omits the fact that the videos (and their claims) posted by Live Action were actually made by an independent filmmaker, not Live Action; she says none of this, deliberately misleading readers. 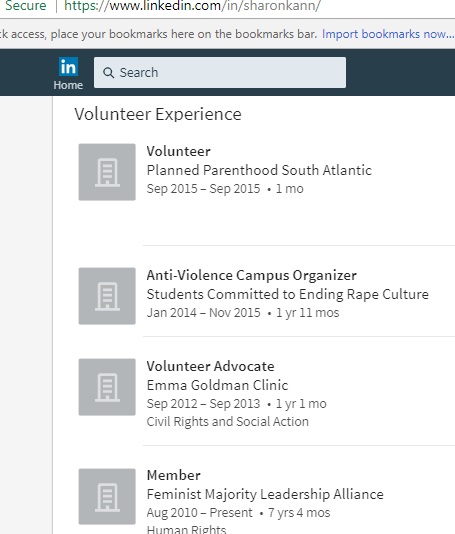 According to Kann (the abortion facility volunteer), “People on Facebook engage with anti-abortion content more than abortion-rights content at a “disproportionate rate…” And there’s Warren’s real problem.

In the minds of people like Warren and those at Media Matters, which openly admits it is a “progressive research and information center dedicated to comprehensively monitoring, analyzing, and correcting conservative misinformation in the U.S. media,” you’re only credible if you hold a favorable view of abortion.

But Media Matters, founded by David Brock, described by Politico as “the self-described reformed right-wing hitman who became a key figure in Hillary Clinton’s unsuccessful presidential campaign,” is not impartial. Brock openly supported Hillary Clinton for president and has been described as “a prominent strategist with a web of liberal groups.” His secret meetings have included representatives from several pro-abortion groups, such as “Stephanie Schriock of Emily’s List, Cecile Richards of Planned Parenthood, and Ilyse Hogue of NARAL Pro-Choice.” 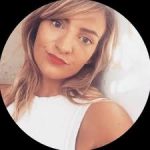 Brock’s strategy for defeating his foes includes pressuring Facebook and other social media outlets to “adjust its model to stem the flow of damaging fake news on its platform’s pages.” Brock’s document claims that “journalists” like Ms. Warren will “weaponize our research products to… take action against… the extremists seeking to manipulate it.”

Warren believes that you and I should not have a say in which news we choose to read. Instead, “credible articles about abortion” should only come from “reputable news outlets like the New York Times….” But the “credible” New York Times isn’t so credible. NYT, among other media outlets, reported (without question) Planned Parenthood’s deceptive claims that they would retrain staffers after they were caught offering assistance to an undercover actor posing as a sex trafficker.

Warren’s claim that pro-life news receives a higher view rate is not sourced, but if it is true, the reason is simple: people are trending more pro-life, and Warren is bothered by that, so she and her allies resort to cries for censorship — not of their own, ideologically driven “fake news,” but of news they don’t agree with.