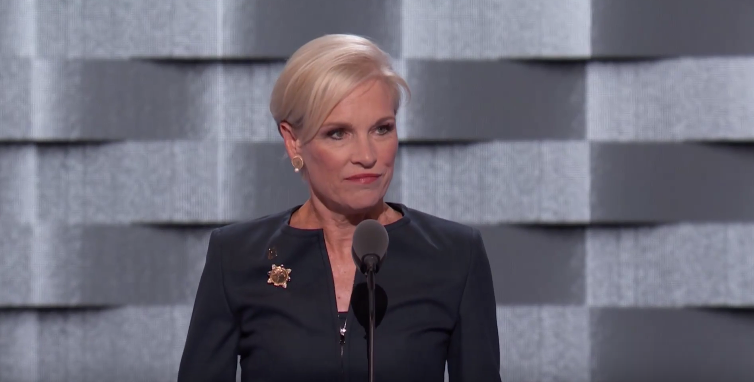 Just as she did in 2012, Planned Parenthood President and CEO Cecile Richards spoke at the Democratic Party Convention on Tuesday night.

Clinton has a 100 percent abortion voting record and supports abortion on demand throughout all nine months of pregnancy, just like Planned Parenthood.

Richards’ theme focused on Planned Parenthood’s mission, with a few lines in particular worth addressing. She said:

For the “millions” that Planned Parenthood is proud to tout, the abortion chain fails to admit that the number of clients served has actually gone down. Their legitimate health services have also decreased.

Federally Qualified Health Centers (FQHCs) have more locations to serve more patients with more services. Thus, women could actually be better served if  Planned Parenthood is defunded and that money is re-routed.

And she will always stand up for Roe v. Wade and the right of every woman to access a full range of reproductive health care, including abortion, no matter her economic status.

Richards is in favor of repealing the Hyde Amendment, which prohibits taxpayer dollars from going towards abortions. It has been credited with saving over one million lives. The Democratic Party Platform supports the repeal as well.

And she has chosen as her running mate, Tim Kaine, a man who has been a champion for women and families his entire career.

If Richards, the president and CEO of the nation’s largest abortion provider, has glowing words for Kaine, that’s all one needs to know about his record on abortion.

Hillary has always been in Planned Parenthood’s corner, because she knows women deserve someone in theirs.

Women like Dayna Farris Fisher, a mom in Dallas who was diagnosed with breast cancer two years ago.

Today, Dayna is cancer-free. She says she couldn’t have done it without Vivian, the Planned Parenthood clinician who stuck with her all the way through treatment.

That Planned Parenthood is vital to providing care for women with breast cancer is the pro-abortion lie that just will not die. Planned Parenthood is not and never has been licensed to perform mammograms. Richards herself admitted this testifying before Congress, though she also claimed she had never said they performed mammograms, something Live Action already exposed.

What Planned Parenthood does is refer out and provide manual breast exams, the same kind of exam a woman can administer herself.

But the fight’s not over. Donald Trump has pledged to appoint justices who will overturn Roe v. Wade and undo decades of progress.

And Planned Parenthood’s “worldview,” supporting abortion at any time, for any reason, with no restrictions, paid for by taxpayers isn’t disturbing?

It’s also hardly “progress” that the United States is currently one of only seven nations to permit elective abortions beyond 20-weeks.

Well, Donald Trump, come November, women are going to be more than an inconvenience.

We’re going to be the reason you’re not elected.

As a pro-life woman, I am beyond tired of Richards and the abortion industry lumping me in to their pro-abortion cause for political gain. There are plenty of reasons for a woman, or anyone, to vote or not vote for someone. But Richards does not get to speak for all women. She certainly does not get to speak for me, since I am not only pro-life, but a pregnant woman who has chosen life.

Earlier in her speech, Richards also said that “women’s health and rights are on the line and on the ballot in this election.” In a way, I agree with Richards, in that my daughter’s rights are at stake in this election, just as the rights of all preborn baby girls are.

Richards didn’t just grace the DNC with her presence in her brief speech. She also spoke at Planned Parenthood’s invitation-only “Sex, Politics, and Cocktails” event.