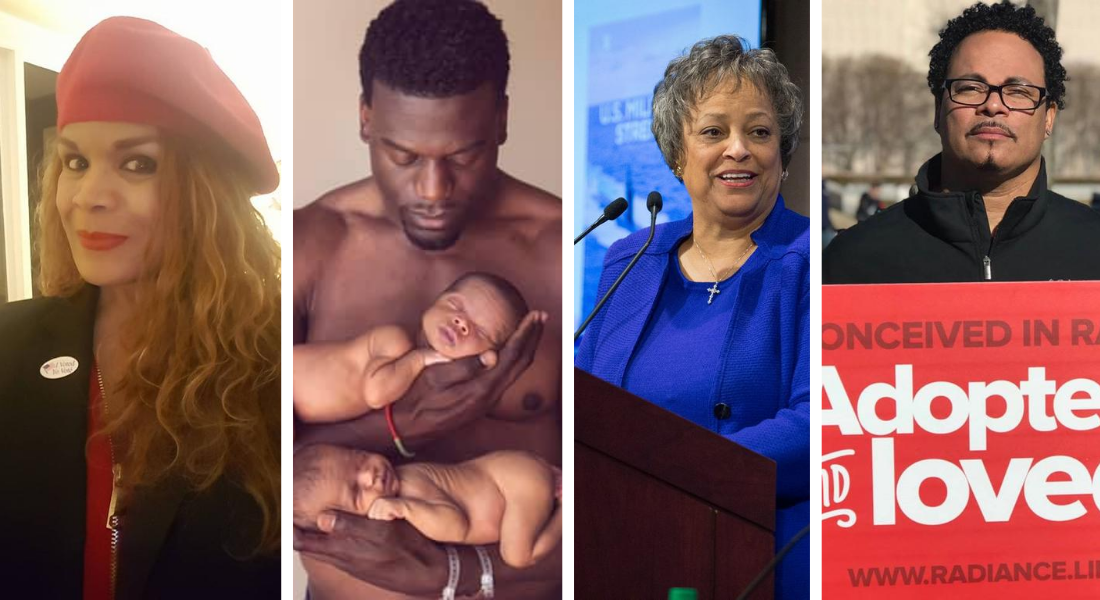 August is Black Business Month, a celebration of Black American contributions to our country and economy, as well as an observance to highlight the importance of entrepreneurship in Black communities. According to the United States Census, there are over two million businesses owned or operated by Black Americans. These trailblazers, entrepreneurs, and managers work in endless varieties of industry, and the pro-life movement is no different. Black pro-life activists have been making their voices heard in the movement, changing the conversation around abortion, and making a difference.

Ryan Bomberger is the co-founder of the Radiance Foundation. Conceived in rape, Bomberger has not shied away from speaking openly about the courageous love his biological mother showed him by carrying him to term and giving him the gift of life. Adopted at six weeks old, Bomberger grew up in a multi-racial family with 13 brothers and sisters, 10 of whom were adopted.

Bomberger met his future wife, Bethany, after she had already given birth to a daughter, Radiance, whose name inspired the Radiance Foundation. Bomberger adopted Radiance before he and Bethany had two biological children, and then adopted a fourth child. He is also an Emmy® Award winner, a broadcast media designer, producer, columnist, international public speaker, and author. It was his background in advertising that spurred him to launch the first major ad campaign exposing how abortion disproportionately affects the Black community.

One of the “Too Many Aborted” billboards created by Bomberger

Too Many Aborted is an awareness campaign aimed at calling attention to the prevalence of abortion in the Black community. Stating that nearly 40% of Black pregnancies end in abortion, Too Many Aborted hopes to protect Black lives, empower Black women to choose life, and offer hope and healing for Black women who have suffered through abortion.

Fighting for civil rights is, quite literally, in Alveda King’s blood. As the niece of Martin Luther King, Jr., and the daughter of civil rights activist A.D. King, it’s no surprise that King feels compelled to fight for justice and equality. An outspoken pro-life activist, she created Alveda King Ministries to use the gospel of Jesus Christ to transform the culture into one which “embraces the dignity and sacredness of every human personality.” She is also the director of Civil Rights for the Unborn, a ministry outreach of Priests For Life.

A post-abortive woman herself, King has dedicated over 30 years to fighting for life, and pointing out the genocide against Black preborn children in particular. For her activism, King has received the Life Prize Award, the Cardinal John O’Connor Pro-Life Hall of Fame Award, and the Civil Rights Award from Congress of Racial Equality (CORE).

Perhaps more well-known by many for his career in the NFL than for his activism, Benjamin Watson has used his fame and influence to make a difference. He, along with his wife Kirsten, created the One More Foundation. Benjamin spoke at the 2017 March for Life, while Kirsten appeared in Livee Action’s “Pro-Life Replies” video series, dismantling the “My Body, My Choice” argument.

Both Benjamin and Kirsten were recipients of Live Action’s inaugural Life Awards.

In his speech at the March for Life, Benjamin urged men to take a greater role in the pro-life movement to fight against abortion. “We as men must stand up for the lives of the innocent and their mothers in crisis,” he said. “As important as women have been in championing this cause, you men must rise up and lead the charge. Even if it wasn’t demonstrated for you by a father, you can be different. You can change the course of generations. Men: we can be silent no more!”

Currently serving as president of the Heritage Foundation, Kay Coles James has a long history of public service. She served as the director for the United States Office of Personnel Management under George W. Bush from 2001 to 2005, and before that, as Virginia Secretary of Health and Human Resources, and as the dean of Regent University’s government school. She also currently serves as a member of the NASA Advisory Council, and is the president and founder of the Gloucester Institute, which helps develop future Black leaders.

But in addition to this impressive resumé, James is the founder of Black Americans for Life. The organization’s goal is to provide outreach specifically to the Black community, with the goal of saving lives, as well as helping to educate and mobilize Black pro-life activists, who can make a difference in their community. “The right to life is the most fundamental of all civil rights,” she said in a statement on their website. “While the right to education, healthcare, housing, or employment are important, they pale in existence to the right to live, walk, and love among us. We must stop abortion to protect the right to life for preborn children.”

James also spoke at the 2020 Pro-Life Summit, has worked as a counselor in a pregnancy resource center, and has spoken out about the need for pro-life women to be accepted as part of the women’s rights movement.

Day Gardner began making history decades ago, when she was competing in pageants. Gardner was crowned Miss Atlantic City and Miss Delaware, and in 1977, was the first Black contestant to ever make the top 10 in the Miss America pageant. She is currently a member of the Project 21 national advisory council, as well as an executive member of the National Clergy Council. She has worked as a successful businesswoman, a media consultant, an on-air news personality and producer, a radio host, and an author.

In addition to all of this, Gardner is the president of the National Black Pro-Life Union. This organization aims to coordinate the flow of communications among Black pro-life groups, to help network and combine resources to better fight for life. She also serves as Associate Director of the National Pro-Life Center on Capitol Hill.