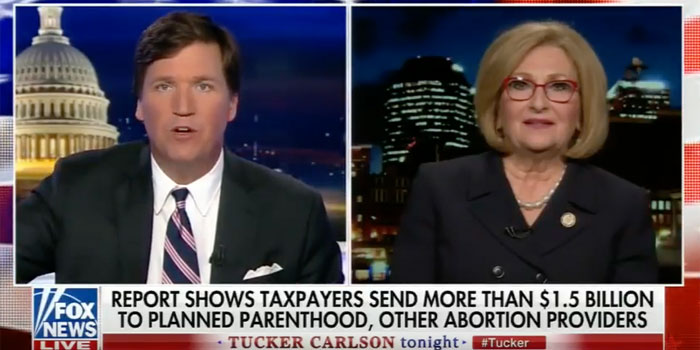 On a recent Tucker Carlson Tonight, host Tucker Carlson spoke with Rep. Diane Black (R-Tenn.) about why Planned Parenthood hasn’t been defunded yet, framing it as a campaign promise pro-life Republicans ought to fulfill. Black, who has sponsored legislation in the House defunding entities which commit abortions, reminded Carlson that it was the Senate which failed to pass the legislation, urging viewers to contact their Senators about defunding the abortion giant, which annually receives half a billion dollars in taxpayer funding.

Carlson suggested that regardless of Americans’ stance on abortion, they should be against taxpayers being forced to fund such a politically active organization. Political arms of Planned Parenthood shell out money which goes towards pro-abortion, Planned Parenthood-supporting political candidates every year, including this one. As Carlson put it, it’s a “self-reinforcing loop.” This money may have come from taxpayers. In fact, after Planned Parenthood CEO and President Cecile Richards testified before a Congressional committee in September 2015, the committee found that “[t]axpayer dollars subsidize Planned Parenthood’s political affiliates” — which makes them different from other political organizations and special interest groups.

A majority of Americans, including even those who self-identify as pro-choice, are opposed to taxpayer funded abortions, while Planned Parenthood is the polar opposite, opposing the Hyde Amendment, which prohibits using federal funding from going towards most abortions. But some states do fund abortion, and taxpayer dollars usually are allowed to fund “medically necessary” abortions as well as those conceived in rape and incest. (Court documents reveal that Planned Parenthood considers all abortions to be “medically necessary.”)

Regardless of their views on abortion or Planned Parenthood, if more Americans knew about the evidence showing that Planned Parenthood has committed Medicaid fraud, it is likely they would be against their hard earned dollars going toward such an organization.

Due to the fact that any money going to the organization is fungible, Planned Parenthood is able to free up funding for abortions more easily when it receives funding for its other services.

Title X federal funding, which Planned Parenthood receives, is supposed to go towards family planning services. But Black called out abortion as “family destruction” rather than family planning or healthcare. And she’s right. No matter when an abortion takes place, abortion takes the life of an already conceived preborn human being; it’s not preventing conception. Dr. Anthony Levatino, a former abortionist, explains a second trimester D&E abortion (also sometimes referred to as a dismemberment abortion) procedure, typically done between 13 and 24 weeks of pregnancy, below:

President Trump previously made it known that if Planned Parenthood were willing to cease committing abortions and handing out money to those which also commit abortions, to instead focus on actual family planning, then defunding the organization would possibly have ceased to be an issue. But the abortion giant is not willing to give it up, showing its priorities lie with its moneymaker.