With Roe v. Wade officially overturned, there have been widely varying reactions. While the pro-life movement is celebrating, the abortion industry is doing the opposite. And their allies in the government — politicians like President Joe Biden, House Speaker Nancy Pelosi, Rep. Alexandria Ocasio-Cortez, and more — are likewise spreading hysteria and, in some cases, threatening rhetoric.

Several hours after the decision was announced, Biden gave a short speech in which he said his administration will do all it can to protect the supposed ‘right’ to kill human beings still in the womb. He has previously floated the idea of instituting executive orders to make abortion legal across the country.

“Today the Supreme Court of the United States expressly took away a constitutional right from the American people, that it had already recognized,” he began. “It didn’t limit it. It simply took it away. That’s never been done to a right so important to so many Americans.”

He further called it a sad day, both for the Supreme Court and for the country. He urged voters to elect more pro-abortion politicians, to codify Roe into law, and in the meantime, called for Congress to work to protect abortion now.

“It’s a sad day for our country but it doesn’t mean the fight is over,” he reiterated. “We need to restore the protections of Roe as law of the land. We need to elect officials who will do that… this is not over.” 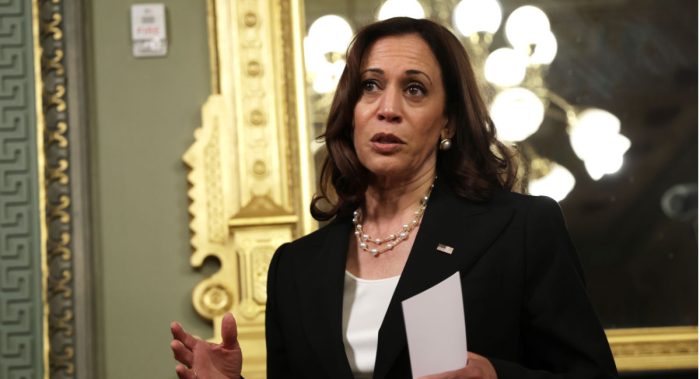 This afternoon, VP Harris spoke about the fall of Roe in a live-streamed press conference. Originally, Harris said she had planned to speak about maternal health, but evidently, abortion instead took precedence.

“On the way here, we learned that the United States Supreme Court had rendered its decision in Dobbs v. Jackson Women’s Health Organization. Here’s what that decision means,” she began, continuing:

This is the first time in the history of our nation that a constitutional right has been taken from the people of America. And what is that right, some might ask? it’s the right to privacy. Think about it as the right for each person to make intimate decisions about heart and home. Decisions, about the right to start a family, including contraception, such as IUDs and the morning-after pill. Decisions, about whether to have a child, including — as Sen. Durbin mentioned — through in-vitro fertilization.

She then went on to compare the decision to protect preborn lives as one that would threaten gay or interracial marriage, and took offense to the Supreme Court’s notion that abortion is not deeply rooted in our nation’s history. 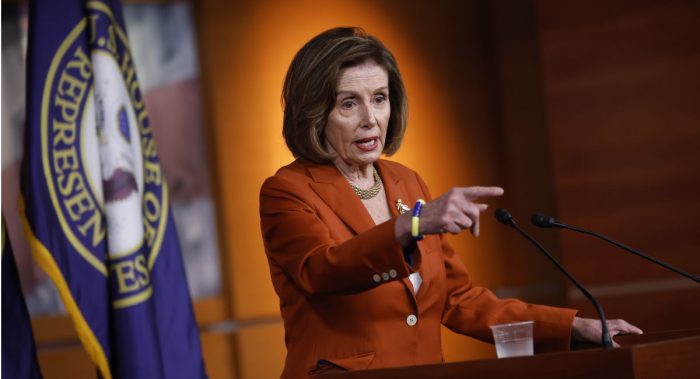 Pelosi spoke out on Twitter, as well as in her weekly press conference, about the Dobbs decision.

“Today, the Republican-controlled Supreme Court has achieved the GOP’s dark and extreme goal of ripping away women’s right to make their own reproductive health decisions,” she wrote, adding, “In Congress, Republicans are plotting a nationwide abortion ban. In the states, they want to arrest doctors offering reproductive care & women for terminating a pregnancy. GOP extremists are threatening to criminalize contraception, in-vitro fertilization & post-miscarriage care.”

Then, during her live-streamed press conference, she continued her outrage over abortion no longer being legal across the entire nation.

“There’s no point in saying good morning, because it certainly is not one; this morning, the radical Supreme Court is eviscerating Americans’ rights, and endangering their health and safety,” she said immediately upon entering. “But the Congress will continue to act to overcome this extremism, and protect the American people.”

She then claimed that, because abortion isn’t federally protected, women now have less freedom than their mothers, insinuating that women are only empowered and free if they have the ability to kill their children at will.

Join me live at the U.S. Capitol for my weekly press conference. https://t.co/bfUGolwOI6

Calling it one of the “darkest days” in our country’s history, Sen. Chuck Schumer harshly criticized the Supreme Court. “American women are having their rights taken by 5 unelected Justices on the extremist MAGA court,” he wrote on Twitter. “These justices — appointed by Republicans and presiding without accountability — have stolen the fundamental right to abortion.”

Homicide against another human being can never be a valid fundamental human right; abortion it violates the fundamental right to life of an innocent human being not yet delivered.

Schumer recently came under fire after his past comments at an abortion rally resurfaced, where he threatened Justices Kavanaugh and Gorsuch. After the draft opinion of Dobbs leaked, an abortion advocate was arrested for planning to assassinate Kavanaugh. Schumer has, so far, not apologized for his remarks. 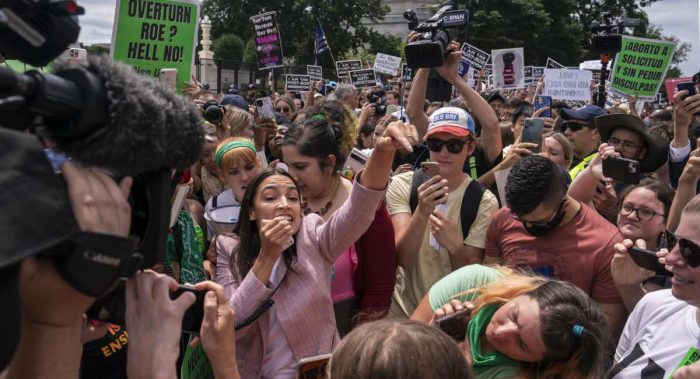 Alexandria Ocasio-Cortez responded by railing against the Supreme Court. “Overturning Roe and outlawing abortions will never make them go away,” she wrote on Twitter. “It only makes them more dangerous, especially for the poor + marginalized. People will die because of this decision. And we will never stop until abortion rights are restored in the United States of America.”

Of course, it is not true that women will die now simply because Roe v. Wade was overturned; they weren’t dying by the thousands before Roe, either, but abortion advocates have continued to perpetuate this myth regardless of the truth.

In a speech on the House floor, she further denied that this is truly an issue of being pro-life, and argued, “Every single one of us has woken up today with less rights than we had yesterday.”

Rep. Alexandria Ocasio-Cortez (D-NY): "Every single one of us has woken up today with less rights than we had yesterday." @AOC pic.twitter.com/EaXUvrk0xB

Furthermore, Ocasio-Cortez joined a mob of people in front of the Supreme Court building, where she chanted that the decision overturning Roe is “illegitimate” and yelled for people to go “into the streets.” Given the nonstop violence from abortion supporters in the past weeks — which has included arson, vandalism, and assault — this could easily be construed as inciting people to continue their violent rioting.

BREAKING: Congresswoman @AOC has arrived in front of the Supreme Court and is chanting that the Supreme Court’s decision to overturn Roe v Wade is “illegitimate” and calls for people to get “into the streets” | @TPUSA pic.twitter.com/jNkCYDrLtz

“We’ll be affected, and it’s, ‘oh well,'” she said through tears with her arms around another woman. “Thirty-six million people, it’s ‘oh well?’ Thirty-six million people, and this is a far-right extremist Supreme Court that’s making this decision, that affects other people! That affects lives, with Black women — when we know, that Black women, the leading cause of death before 1973 was the sepsis… was the sepsis that went along with these unsafe abortions. And to say, ‘Hey, we’re good with going back there, we’re gonna send you back there!’ To know that people are already hurting, that people need services! This is health care!”

According to the CDC, the leading cause of death for Black women at that time was ischemic heart disease. Only two women total are listed as having died from causes related to abortion in 1972 — illegal or otherwise.

Emotions and tears filled Planned Parenthood in STL as Roe vs Wade was overturned. Congresswoman @CoriBush overwhelmed, speaking out in the decision moments after the announcement. @KMOV pic.twitter.com/txiKdjnYBv

Bush further wrote on Twitter, “Abortion care IS health care. It was so before this. And it will remain so after this. We don’t care what a far-right extremist Supreme Court that is in a crisis of legitimacy says. Your racist, sexist, classist ruling won’t stop us from accessing the care we need.”

Other politicians also spoke out on Twitter, criticizing the Supreme Court for their decision, like Bernie Sanders, Elizabeth Warren, Patty Murray, and Pete Buttigieg:

Overturning Roe v. Wade and denying women the right to control their own bodies is an outrage and in defiance of what the American people want. Democrats must now end the filibuster in the Senate, codify Roe v. Wade, and once again make abortion legal and safe.

We are not powerless. Here’s what I’m fighting for: Expanding our Senate majority so we can eliminate the filibuster & codify Roe. Expanding the Supreme Court to rebalance this institution. Defending abortion rights in states through ballot measures and downballot elections.

Today, Republicans dragged this country backwards by half a century.

Republicans ripped away our rights and made this generation the first generation of American women with fewer rights than their mothers.

For 50 years, this nation respected a woman’s constitutional right to make her own decisions. Today the Court held that government officials will decide instead.

Our work continues: to ensure that in our lifetimes, American rights & freedoms will be protected, not withdrawn.

Though these pro-abortion politicians are claiming this is an injustice against Americans, polling says otherwise.

Though on the surface Americans say they support Roe, once they learn what overturning Roe actually means — merely returning the decision on abortion to individual states, not making it a federal crime — they support it in much higher numbers. Pro-abortion politicians have continued to rely on their tactic of misleading the American public to get their way.