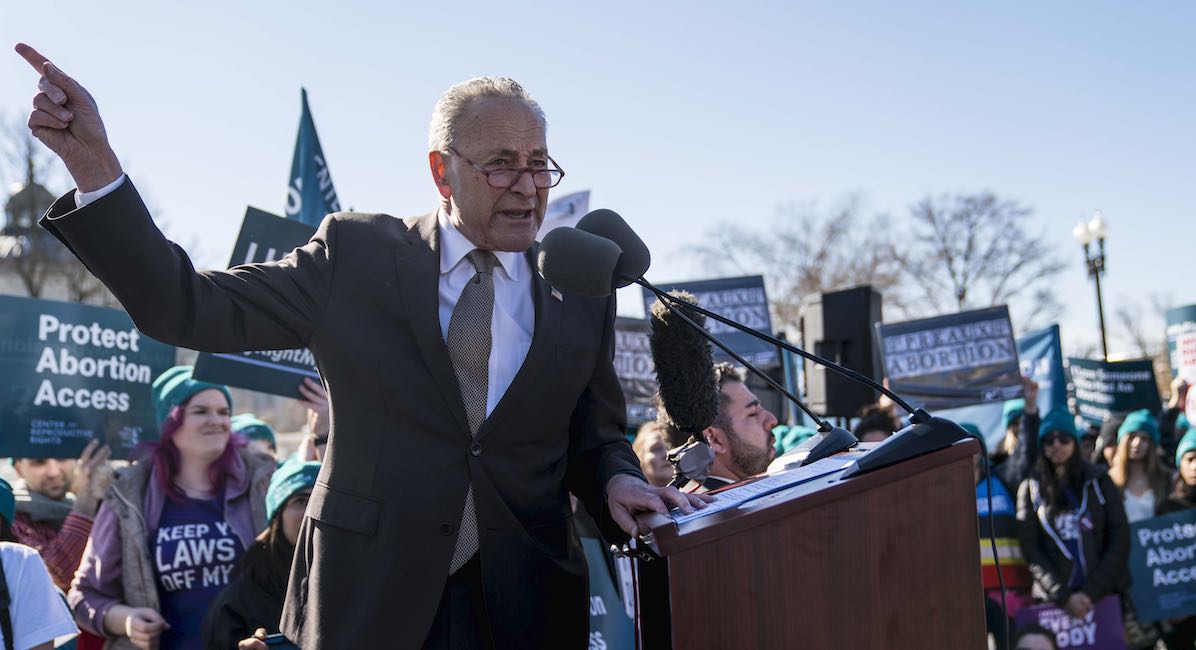 Today, both pro-life and pro-abortion activists rallied as both sides made oral arguments before the Supreme Court regarding requiring admitting privileges for abortionists in Louisiana. Admitting privileges are currently required of all physicians in the state except those who commit abortions. The pro-life Protect Life Protect Women rally, emceed by Live Action Director of External Affairs Alison Centofante, included speeches from women who were injured during their abortion procedures at Louisiana facilities. They spoke of the need for hospital admitting privileges so their traumatic experiences don’t happen to other women. Abortion groups also held several of their own rallies across the country, but one of them featured a statement many would never have expected: a sitting senator issued a threat against two Supreme Court justices if they ruled in favor of the admitting privilege requirement.

Senate Minority Leader Sen. Chuck Schumer made an appearance at a rally hosted by the Center for Reproductive Rights, a pro-abortion organization. During his speech, Schumer made a statement that many immediately interpreted as a threat — and the crowd cheered. “I want to tell you, Gorsuch. I want to tell you, Kavanaugh. You have released the whirlwind, and you will pay the price,” he shouted. “You won’t know what hit you if you go forward with these awful decisions.”

"You have released the whirlwind and you will pay the price! You won't know what hit you if you go forward with these awful decisions!"pic.twitter.com/e1qKzocJDj

In a statement to Fox News, representatives for Schumer tried to claim he was referring to politics. “It’s a reference to the political price [Republicans] will pay for putting them on the court and a warning that the justices will unleash a major grassroots movement on the issue of reproductive rights against the decision,” Schumer’s office said.

Yet that argument doesn’t seem to make much sense, considering that Supreme Court justices have lifetime appointments, and are not vulnerable to being voted out of office. And it seems the Supreme Court interpreted Schumer’s comments as a threat. John Roberts, Chief Justice of the Supreme Court, issued a rare statement scolding Schumer for his comments.

This morning, Senator Schumer spoke at a rally in front of the Supreme Court while a case was being argued inside. Senator Schumer referred to two Members of the Court by name and said he wanted to tell them that ‘You have released the whirlwind, and you will pay the price. You will not know what hit you if you go forward with these awful decisions.’

Justices know that criticism comes with the territory, but threatening statements of this sort from the highest levels of government are not only inappropriate, they are dangerous. All Members of the Court will continue to do their job, without fear or favor, from whatever quarter.

Ben Sasse also criticized his colleague in the Senate, calling Schumer’s speech “bullying tactics” that need to stop. “The Democratic Party is so radicalized on abortion politics that today Chuck Schumer threatened Justice Gorsuch and Justice Kavanaugh if they didn’t strike down a simple, common-sense, pro-woman law that simply says that abortion doctors need to have admission privileges at a local hospital,” Sasse said in a statement. “Think about this, if a Republican threatened Justice Sotomayor or Justice Ginsburg, it would be the biggest story not just in Washington but all across America.”

Despite claims from abortion activists, admitting privileges are necessary. It means women will receive consistency and continuity of care, and should something go wrong, the hospital would be informed of the patient’s condition and records before she ever arrives at the hospital. This is crucial so that an injured patient receives timely care.

Again, in Louisiana, every outpatient surgical facility is required to have hospital admitting privileges… and abortionists are the only exception. If abortion truly is legitimate health care, then the abortion industry shouldn’t be fighting a very basic requirement of health care providers.

This is the first abortion-related case to be heard by Justices Gorsuch and Kavanaugh.