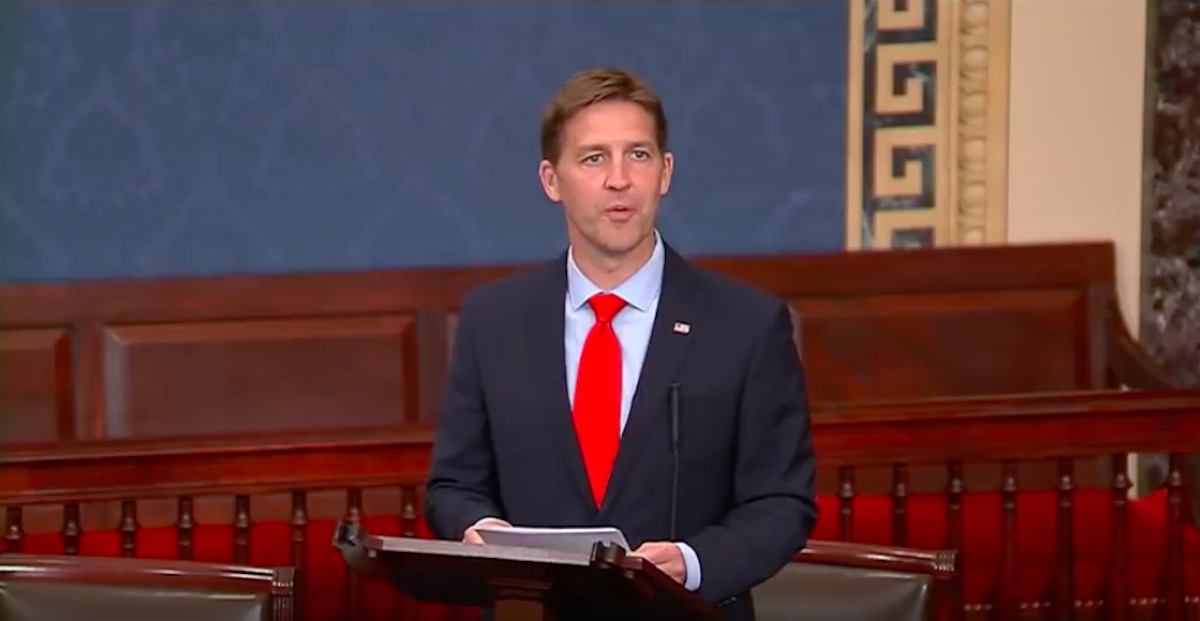 Republican U.S. Senator Ben Sasse appears to have had enough of the recent slanderous attacks against pro-lifers by media and politicians alike. Sasse, the author of the Born-Alive Abortion Survivors Protection Act, spoke today for just over 12 minutes on the Senate floor, his comments coming “a week after Senator Kirsten Gillibrand compared pro-life beliefs to racism and two days before Planned Parenthood hosts an abortion roundtable for Democrats, including Senators Booker, Gillibrand, Harris, Warren, and Sanders,” according to a press release from the Senator’s office. Live Action News previously noted Gillibrand’s remarks, which were recorded in an interview by a media outlet.

Sasse began by pointing out how out of touch pro-abortion politicians seem to be with the will of the American people. “Today, the radical things that the nation’s largest abortion business wants are basically indistinguishable from the position of almost every Democrat running for president: Abortion anytime, anywhere, for any reason, for free…. These candidates are wildly and spectacularly out of the mainstream in American life. Gallup polling over the last two decades has consistently shown that a majority of Americans are opposed to unrestricted abortion access beyond the first trimester.”

Senator Sasse is correct. And it isn’t just Gallup that has revealed this opposition. A January 2019 Marist poll showed that “Ninety-two percent of Republicans, 78 percent of Independents, 60 percent of Democrats, and 61 percent of those who identified as ‘pro-choice’ stated they wanted abortion allowed only in the first three months of pregnancy — at most,” according to a previous Live Action News report.

Sasse continued his passionate speech, hammering away at the portrayal of pro-lifers as being outside mainstream thought. Nothing could be further from the truth. He stated, in part:

Slandering pro-life Americans as, in effect, Klan members and Nazis, is a way of crushing debate. It’s a way of saying that these people — people like my mom (who prays outside abortion clinics), people like my daughters and my wife (who’ve spent a lot of hours volunteering at crisis pregnancy centers), and people like the overwhelming majority of the Nebraskans that I get to represent – it’s a way of saying that these people are so morally repugnant that they don’t deserve a voice, they don’t deserve to be treated like human beings, they don’t deserve to be engaged in debate, they’re not people that you could possibly have reasonable conversation with them. This is crazy talk.

I have spent a lot of time with pro-lifers in my life, probably a lot more time than most of my colleagues who are going to be at the Planned Parenthood debate in South Carolina on Saturday. And I’ll tell ya, what you won’t find among these people is partisan caricature.

You will find a lot of enthusiasm for the promising in vitro surgeries and for scientific developments in ultrasound and neonatal technology. You’ll find fellow citizens ready to advance the basic American commitment to life through the tools of dialogue, persuasion, and respect.

READ: Senator Ben Sasse asks if Democrats will stand up for this ‘little guy’

In his speech, Sasse exposed the truth and history about Planned Parenthood, the nation’s number one abortion provider, which at last report, killed more than 330,000 babies in just one year — holding a 35% market share of all abortions in the U.S.

… Since the very beginning, the American abortion industry has been intimately connected to eugenics. This is the origins of the movement. As Planned Parenthood Margaret Sanger put it herself — think about this quote: “The unbalance between the birth rate of the unfit and the fit is the greatest present menace to civilization.”

Sanger’s racial opinions are a matter of some dispute, but this part is clear. She intentionally targeted efforts at black neighborhoods in Harlem and in the deep south. And many of the people involved in her efforts took things a step further, going so far as to forcibly sterilize African-American women that they deemed to be unfit to procreate. We could also note that it’s in part because of this ugly history that black women in America are three and a half times more likely to have an abortion than white women. And in some parts of Senator Gillibrand’s home state, black children are actually more likely to be aborted than to be carried to term.

Or we could point to the continued eugenic use of abortion. For example, to kill children who have non-life-threatening diseases. In the United States today, two-thirds of all babies in the womb who are found to have down syndrome are aborted. Two-thirds of all babies found to have down syndrome in the U.S. are now aborted. And in some parts of Europe the rate is pushing 100% and there are public ad campaigns in two nations in Europe to celebrate the fact that they’ve gotten rid of all of their down syndrome babies.

But instead of going point by point, I’ll just recommend that anyone who wants to better understand this disturbing history should read Justice Clarence Thomas’s concurring opinion in Box v. Planned Parenthood of Indiana and Kentucky last month, which came down late last month. I guess that, according to my Senate colleague, Justice Thomas is one of those racists – those notorious pro-life racists that are stalking America.

Senator Sasse’s entire speech was powerful, in defense of the culture of life, which is increasingly ostracized in America.