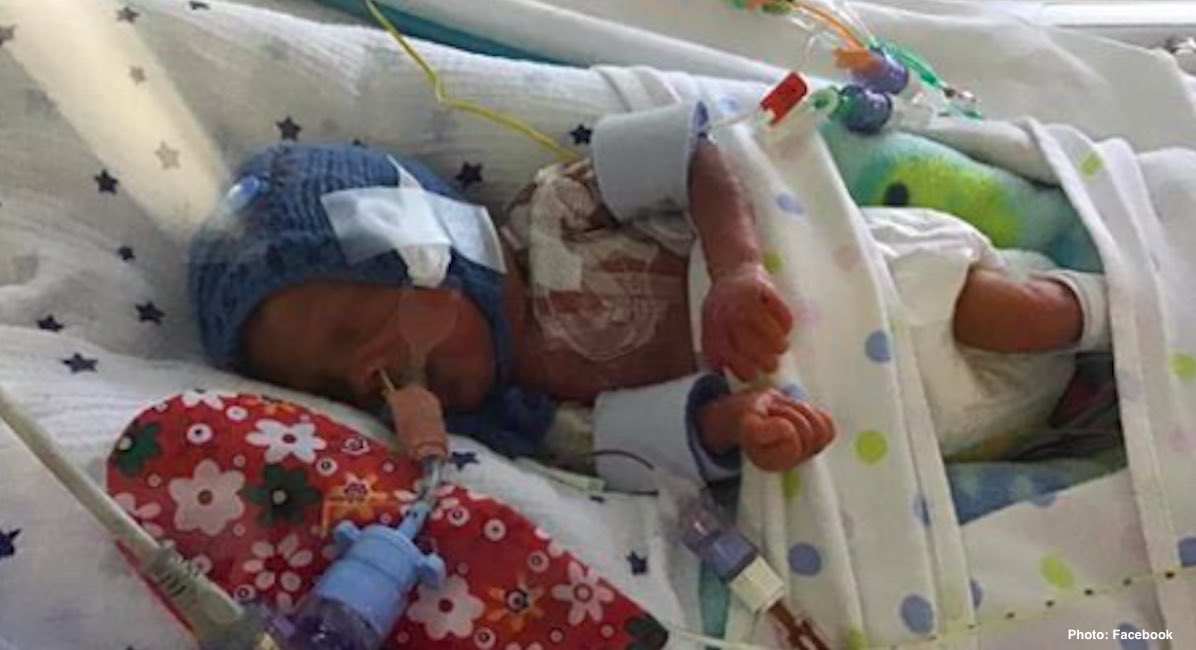 A baby boy born during the COVID-19 pandemic at just 23 weeks gestation is heading home from the hospital months after doctors said he had a three percent chance of survival. He is thought to be one of the UK’s youngest surviving preemies, according to The Sun.

Oliver-Cash Lowther-Ryan was just seven inches long and weighed one pound, three ounces when he was born on March 26, just as the UK was shutting down due to the coronavirus outbreak. Doctors didn’t think he would survive, but Oliver-Cash proved to be such a fighter that they eventually began calling him Rocky “because he just won’t stay down,” explained his father, Ethan Ryan.

“We always knew it would be tricky when he arrived so early,” Ryan explained. “But just after he was born he let out a little cry and the nurse said, ‘We’ve got a fighter on our hands.'”

At 22 weeks and four days gestation, Oliver-Cash’s mother, Frances Lowther, was admitted to the hospital for premature labor concerns. She was put on bed rest and was told that her son likely wouldn’t survive.

“They said he wasn’t ‘viable’ which is a horrible, horrible word but we knew what they meant,” she explained. “The doctors were hoping he would stay in the womb until he had developed further as we knew it would be touch and go.”

Doctors gave Lowther medication to help Oliver-Cash’s lungs and heart, but she went into labor two days later. He was born breech and was put in an incubator. At 11 days after birth, his health began to decline. He was transferred to a new hospital twice.

Told to “prepare for the worst” at least three times, Oliver-Cash’s parents say he has come through all of the obstacles he has faced. He needed to undergo surgery to remove an inch of his bowel due to a perforation and then to have a stoma and colostomy bag fitted. His parents were unable to visit him together, and his mother had to wait nine weeks before she could hold him. His father had to wait 10 weeks. Holding her son for the first time was a moment his mother won’t forget.

“It was the most incredible moment of my life,” she said. “Just to be able to touch him and feel his skin and how soft and warm he was, was amazing. I think for any mum to hold their baby for the first time is special, but after so many weeks of being held back and not knowing if he would make it or not… Knowing he was mine and we had got him to that stage with all the incredible doctors and nurses — it makes him a very real miracle to us.”

Doctors plan for Oliver-Cash to finally leave the hospital on July 23 as long as his health continues to improve. Though he will need further medical treatment as he grows, he has a team of medical experts who are helping him and his parents.

“It’s a mad, crazy world out there,” said Ryan. “[…] But Oliver-Cash has shown he is not afraid of anything. With the help of his amazing, hospital staff, he is still fighting.”

Babies born as young as 21 weeks have survived, though the legal limit on abortion in the UK is still 24 weeks. Doctors there recently moved the age of viabilty from 24 weeks to 22 weeks for some premature babies who have a better predicted chance of survival.