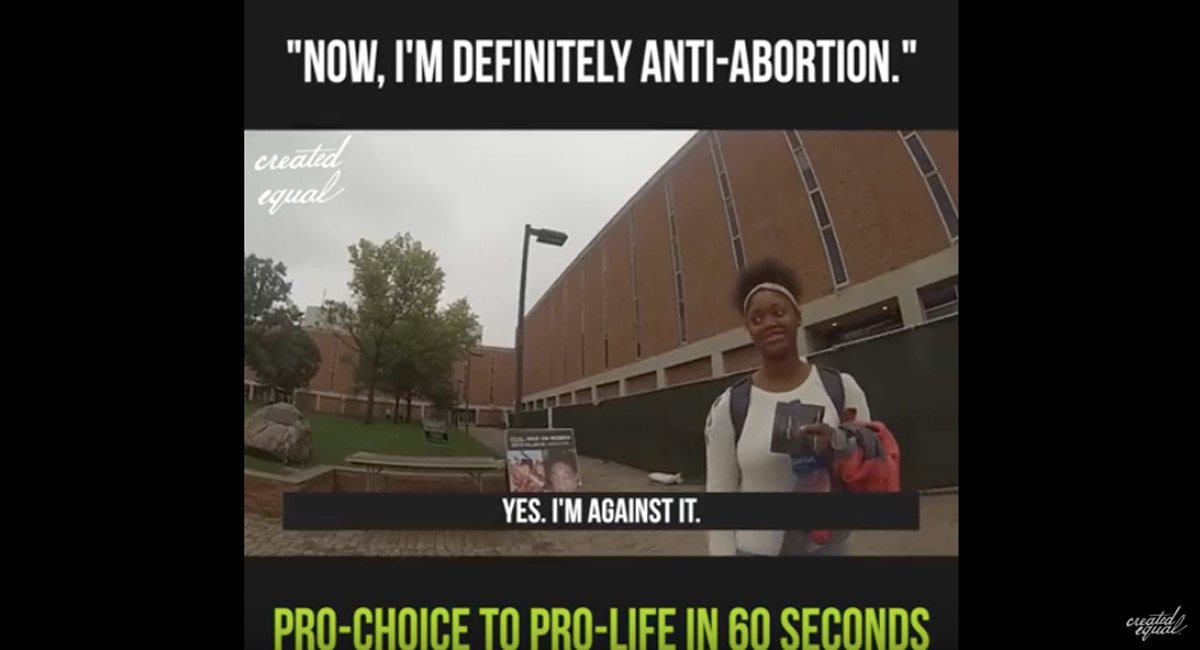 Pro-life group Created Equal has released another video showing the impact that abortion victim images can have on changing the minds of people who may consider themselves pro-choice, yet have never truly thought about the brutality of the act of abortion itself. Recent videos from the group have featured a woman considering abortion who saw the images and then learned of the prenatal development of her own baby, causing her to reconsider her decision; another showed a man deciding against encouraging his girlfriend to abort their baby.

In the video below, a Wright State University student named Diamond sees Created Equal’s display and says, “These pictures are so sad.” As the conversation continues, Diamond adds that when it comes to abortion, “I feel like [people] just don’t think of it, like, they don’t think about this,” she says, motioning to the abortion images.

“Before this,” she says, “I was just like, it depends on the situation, like if a woman was raped or something and she doesn’t want the baby. But, like, these are babies. They’re there whether you wanted them or not. So I’m definitely anti-abortion.”

In an email, Created Equal wrote:

For every video we release showing a changed mind, there are hundreds of other students we’ve impacted. This fall alone, our team has seen 717 students admit their opinion has changed—from pro-abortion to anti-abortion—an average of 18 students for each of the 40 days we’ve been on campus this fall.

And this is only the most obvious of countless ripple effects. Many more opinions are changed later as images linger in students’ minds. Still others continue to wrestle with the pro-abortion worldview which has finally been challenged by our outreach.

The American public is more pro-life than the abortion industry claims. Polls show the public favors greater restrictions on abortion, especially in the second and third trimesters, when the very idea of a preborn child being a mere “clump of cells” is easily proven false, thanks to ultrasound technology. And when people see abortion — as has also been shown in Live Action’s man-on-the-street interviews using the videos from AbortionProcedures.com — the minds of those who consider themselves to be “pro-choice” tend to change.