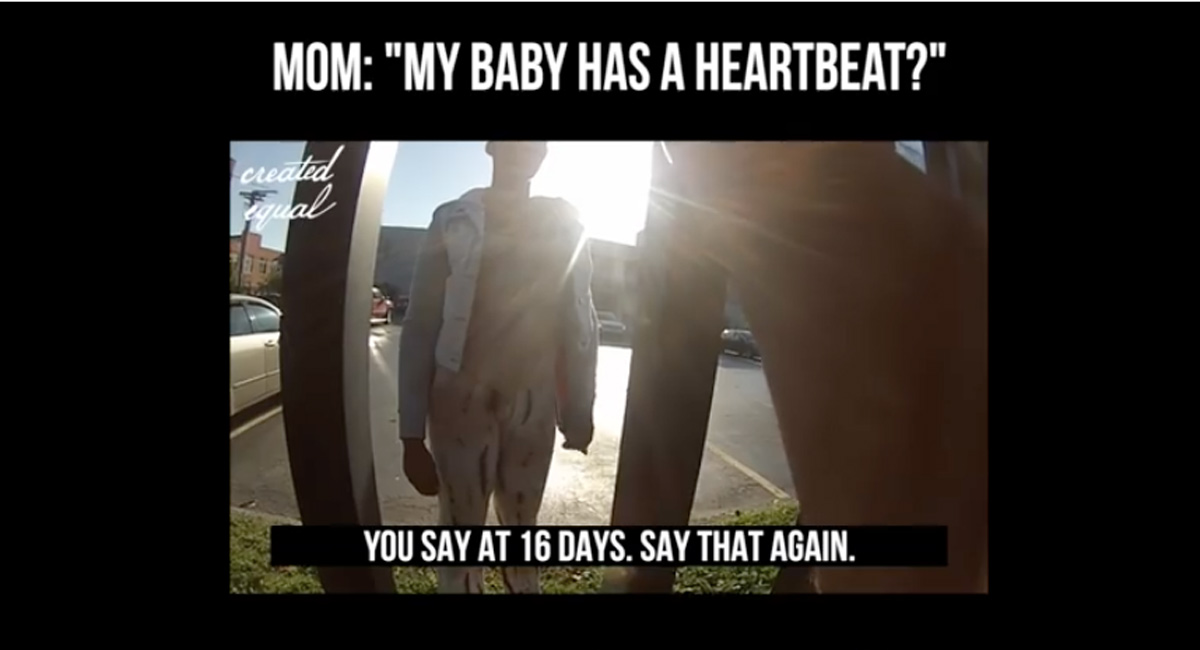 A new video from Created Equal shows a pregnant mother visiting an abortion facility considered by many pro-lifers to be the “most dangerous” in the nation — and reconsidering her decision to abort her baby.

Created Equal’s Road Trip for Life team was on site at Planned Parenthood of the St. Louis Region, which is currently Missouri’s sole abortion provider. This facility has sent a large number of patients to the hospital — more than 67 since 2009. (One commenter on Created Equal’s YouTube video claims that on November 2, 2018, the facility sent its 70th patient to the hospital by ambulance.) There, they met a mom who was pregnant and had four other children at home, and feared she didn’t have the resources to care for another baby. But when Sam, the Created Equal volunteer, calmly and respectfully addressed the woman — a mother who has already carried and given birth to four other children — and told her facts about her baby’s development, she stopped in her tracks, shocked at what she was being told.

Sam told her, “A lot of people don’t know… that they have a beating heart at 16 days. They’ve got hands, and limbs, and feet, and eyes like yours, and a nose like yours….”

“I really don’t want to [abort],” she told him. “It’s not something that I wanna do.” But financial pressure — and undoubtedly, fear — caused her to consider abortion. While the abortion lobby speaks of women’s empowerment, surely this woman’s desperate situation, in which she feels she may have no other choice but to abort, cannot be seen as empowering.

Sam showed the woman a picture of an aborted child, as indicated by the video, and engaged with her kindly and calmly, and listened to what she had to say, without shouting or harassing. And in the end, the woman told him she was going to go get more information on the life-affirming resources available to her at a pregnancy center.

“My baby has a heartbeat?” she confirmed with him again.

“Well, I’m going to go down the street and talk to these people,” the mother said after more conversation, looking at an informational pamphlet given to her by Sam.

This baby’s life may have been saved because someone was on the sidewalk outside this Planned Parenthood abortion facility to offer help and resources to a woman who, by her own admission, didn’t want to have an abortion, but didn’t know what else to do.

To find pregnancy resource centers in the United States, visit OptionLine. For more information on how to reach out with kindness and love to women visiting abortion facilities, visit Sidewalk Advocates for Life. For information on abortion pill reversal, visit Abortion Pill Rescue.