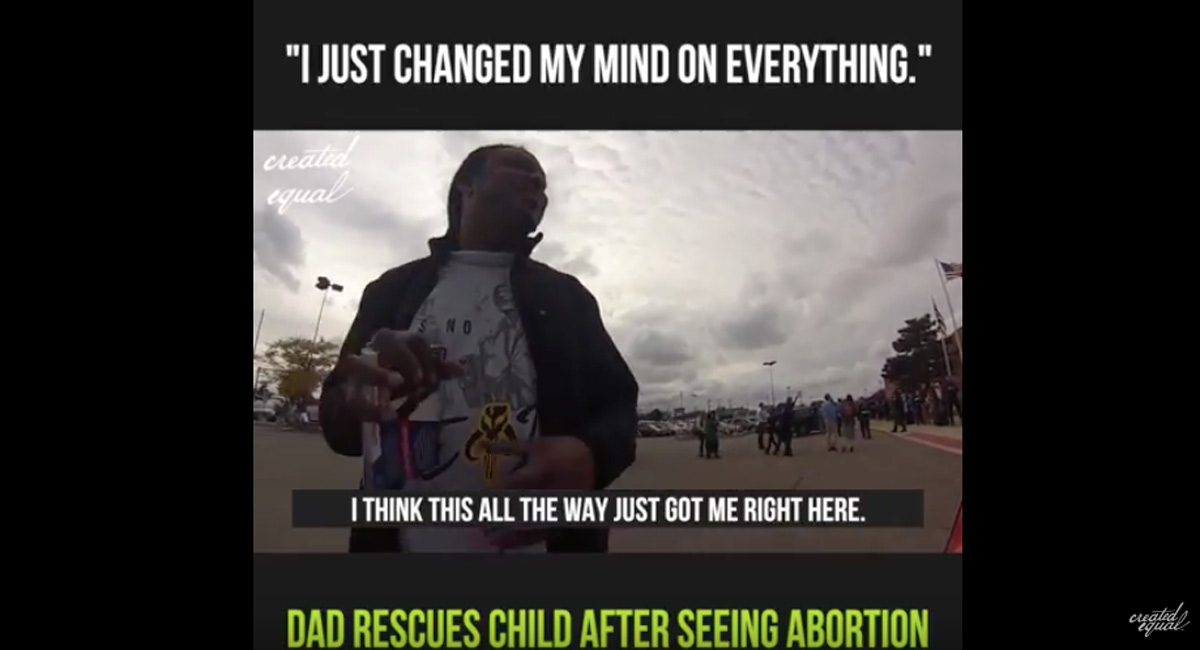 During pro-life group Created Equal’s Road Trip for Life campaign, the group’s “Vote Anti-Abortion” campaign was also underway. Volunteers for the latter group visited an Early Voting Center in Columbus, Ohio, setting up displays featuring images of aborted children. An email from the group says, “For hours, hundreds of voters filed slowly by pictures of aborted babies displayed by our team and discussed with them what it means to use a vote to end abortion.”

While around election time, pro-lifers tend to focus efforts on encouraging Americans to vote in line with their pro-life convictions, sometimes situations arise that remind us how individual hearts can be moved and changed when we reach out with the truth about the destruction abortion brings.

The most satisfying conversation came at the end of the day when one father, Ramone, told our team seeing the pictures rescued his baby’s life. He had been contemplating an abortion, but after coming face to face with it, he said, “I just changed my mind on everything.”

Commenting on our outreach, Ramone said, “If it didn’t change nobody else’s mind, it helped out with me.”

READ: Woman leaves abortion facility after learning her baby has a heartbeat

He then points out that he’s been attempting to justify his desire to abort the baby, saying, “I’m thinking, like, oh, well, it’s not actually all the way a baby, or stuff, right now….” But of the images of abortion victims, and the information on fetal development, he says, “I think this all the way just got me right here… I’m gonna call her and say, ‘Let’s put it in God’s hands…. Let’s not us take the life.’ Anyway, I’m glad you guys are out here.”

He later says he believes that if he tells his girlfriend that he doesn’t want to abort their baby, that she will agree not to abort — that she has looked to him, essentially, for guidance on whether or not to abort their child. This emphasizes the fact that many women faced with the decision to abort are looking for their significant others to show support and say, ‘let’s do this together.’

Ramone seemed extremely moved, most especially, to learn about the development of his own preborn baby, whom he said was about six weeks. The Created Equal volunteer shared with him that his baby already has detectable brain waves as well as a heartbeat, which started beating between 16 and 21 days. Ramone tells the volunteer that he plans to share the fetal development brochure given to him with his girlfriend, and again thanks the volunteer for being there that day.