A new Gallup poll, released on June 11, 2018, looks at Americans’ attitudes toward abortion. The poll revealed that 48 percent of Americans currently identify as pro-choice, and 48 percent identify as pro-life. But the poll also found that Americans still believe abortion should be restricted. This is something Planned Parenthood and its friends won’t admit, as they attempt to paint all abortion restrictions and regulations as extreme. In reality, they are out of step with the American people. In looking at the graph below, only 29 percent of the American people actually agree with the idea that abortion should be legal under any circumstances, at any time. According to the graph, it also means 68 percent of the American people disagree with Planned Parenthood and its friends: 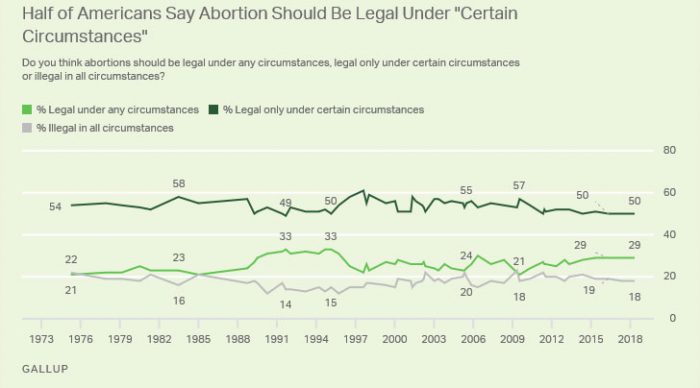 According to Gallup (emphasis added):

Let’s reiterate here: A majority of Americans have, for the past 24 years, believed U.S. abortion law should be more restrictive, and this trend continues. In addition, by a 48 to 43 percent margin, the poll shows that Americans believe this so-called “medical procedure” is morally unacceptable. Gallup notes, “Though attitudes have fluctuated, at no point have more Americans said abortion is morally acceptable than have said it is morally wrong.”

In conclusion, Gallup makes a significant statement — one which should encourage pro-lifers to continue spreading the truth about life in the womb and to continue to help women dealing with unplanned pregnancies. Gallup writes (emphasis added), “… [A] slim majority appear sympathetic to taking steps to limit the circumstances under which abortions are permitted.”