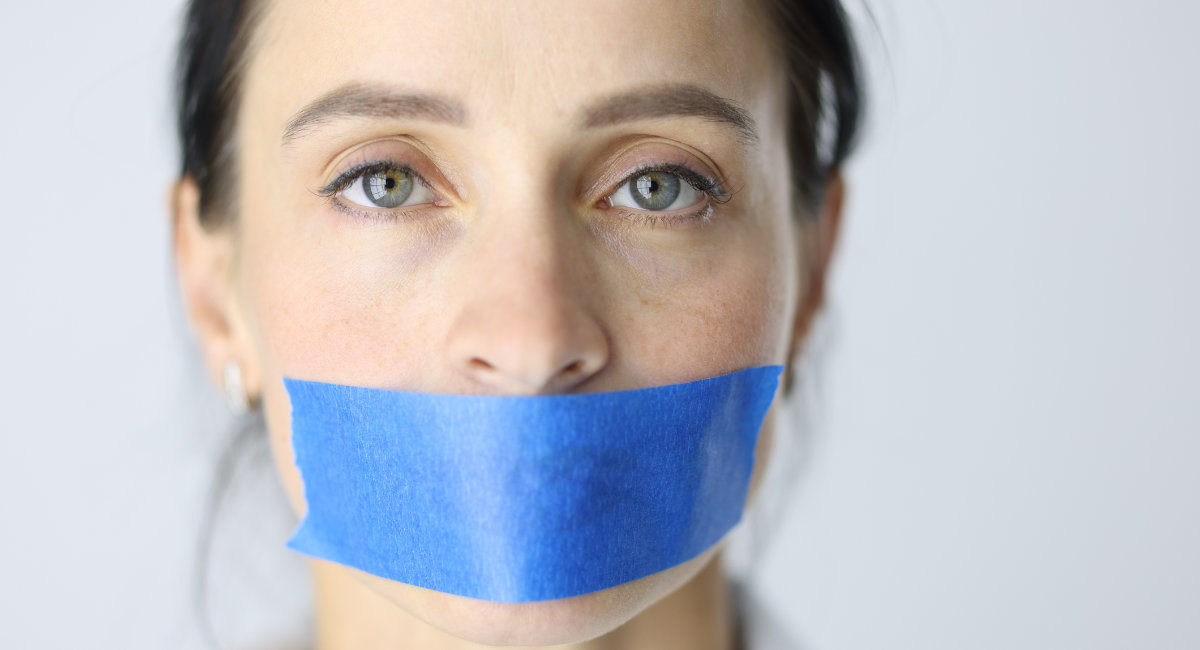 City Council ordinances in multiple states are targeting pro-life pregnancy resource centers (PRCs), falsely claiming that PRCs are “deceptive” and only offer “limited services” simply because they do not commit abortions. In reality, many abortion businesses offer either solely or primarily the “limited service” of abortion, yet these city ordinances conveniently exempt abortion businesses and Planned Parenthood facilities from the same scrutiny they apply to PRCs.

In fact, some City Council members have admitted they put forth these measures at the urging of pro-abortion groups (Reproductive Equity Now as well as Planned Parenthood), and are working with Planned Parenthood in an attempt to crush the PRCs that the industry views as their “competition.” 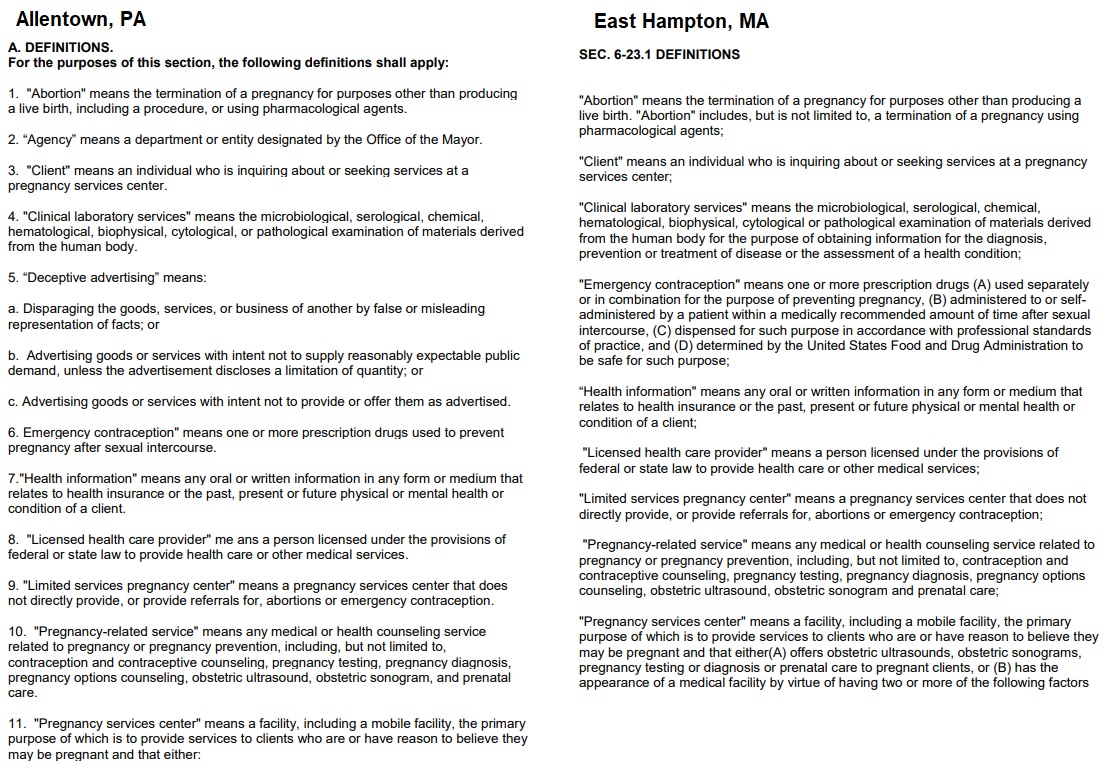 Amhurst, MA: ‘Deceptive Advertising Practices of Limited Services Pregnancy Centers,’ a bylaw presented by Councilman Devlin Gauthier in April, held a fine of $300 was sent out for further review. But in May, Town Councilor Ana Devlin Gauthier proposed a by-law to “to prevent deceptive advertising in Amherst by Crisis Pregnancy Centers (CPC)” falsely claiming that “women are pressured to continue the pregnancy, and medical services are not offered.” The Board then voted 4-0 in favor of writing a letter of support of the proposal.

During the comment period, the Council heard from Carrie N. Baker, an alleged expert who promoted herself as simply a professor at Smith College in Northampton, MA. What Baker failed to disclose is that, according to her website, she is also the “former President of the Abortion Rights Fund of Western Massachusetts and current advisory board member.” In addition, the website states that Baker “also works to expand abortion rights in Massachusetts as a board member of Planned Parenthood Advocacy Fund of Massachusetts.” And according to Commonwealth Magazine, Baker is a “Northampton resident and magazine journalist who helped craft ordinances in Northampton and Easthampton.”

Cambridge, MA: In June, Cambridge City Councilor Quinton Zondervan, who once tweeted that he was a “NARAL MA City Champion,” as well as Vice-Mayor Alanna Mallon sponsored an ordinance that would prohibit the Cambridge city manager from issuing permits or licenses for “Limited Services Pregnancy Centers” according to NBCBoston.com.

On June 27, 2022 the City Council acknowledged that “there do not seem to be any limited services pregnancy centers operating in Cambridge” yet they ordered that the City Manager be requested to direct the City Solicitor to review the anti-pregnancy center proposal and report back to the Council. The proposal was moved to a committee on August 2nd. 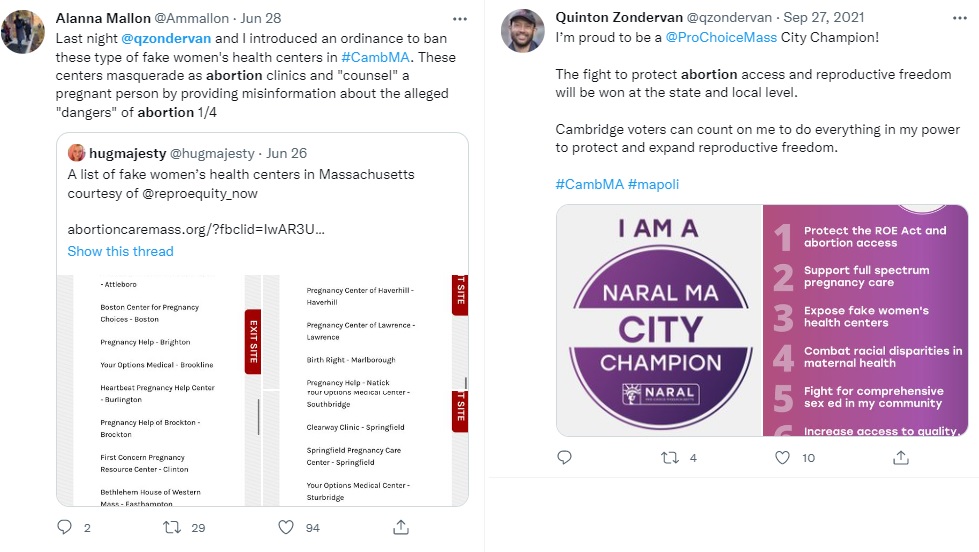 Columbus, OH: The City Council allocated over $26,000 to Pro-Choice Ohio, originally founded as a NARAL affiliate (note: the national offices of NARAL were originally co-founded by eugenicists), to “examine” pregnancy resource centers and determine whether “residents of the City of Columbus have access to medically accurate and legal reproductive health information.” As Live Action News previously documented, the ordinance language claimed that “there is a need for determining if crisis pregnancy centers provide effective, accurate, and comprehensive information and services in their crisis pregnancy centers in Columbus.” The ordinance authorizes the City Clerk to “enter into a non-profit service agreement with Pro-Choice Ohio.”

New York: On August 2, “A Local Law to amend the administrative code of the city of New York, in relation to requiring the department of consumer and worker protection to implement an outreach and education campaign on facilities that deceptively advertise or are otherwise misleading when offering reproductive health services,” was enacted.

The text reads, “Facilities that deceptively advertise or are otherwise misleading when offering reproductive health services, including information related to: (i) services such facilities do and do not typically provide; (ii) how such facilities typically depict their services to the public; (iii) the effect such facilities have on timely and safe access to pregnancy related services; (iv) how to make a complaint regarding deceptive behaviors by such facilities.” It also states that “The information required by this paragraph shall be made available to the public and may be updated as necessary with relevant findings by the state of New York and organizations dedicated to providing comprehensive reproductive health services” (emphasis added) — in other words, pro-abortion organizations will be tasked with research on PRCs.

Councilman Wilson suggested to WESA that free speech on abortion would be available as long as it is kept limited to church. “They can say that in their church, but when someone’s seeking out health care, it’s wrong,” Wilson told WESA.

Somerville, MA: A March 25, 2022 post by Planned Parenthood states that the Somerville City Council “passed the Crisis Pregnancy Center (CPC) ordinance (Number 283570. ‘CONCERNING DECEPTIVE ADVERTISING PRACTICES OF LIMITED SERVICES PREGNANCY CENTERS.’  According to the ordinance, a limited services pregnancy center that intends to perform a pregnancy related service cannot publicly engage in false and deceptive advertising or disseminate misinformation or disinformation regarding pregnancy-related services. Each failure to comply with the requirements in the ordinance will be deemed a separate offense. Failure to comply can result in a fine of up to $300.” The measure was proposed by Councilor Kristen Strezo.

Worcester, MA: Live Action News previously reported that the City Council of Worcester, Massachusetts, voted 6-5 to request that the city manager and city solicitor draft an ordinance “concerning deceptive advertising practices of limited pregnancy centers and prohibiting such activities from being permitted in the city.” The measure was supported by Mayor Petty, Councilor Thu Nguyen, Councilors Khrystian E. King, Sean M. Rose, George J. Russell and Etel Haxhiaj, according to theCatholic Free Press. The definitions are similar to those outlined in other cities and the ordinance would hold a criminal penalty of $300.

Proposals which may not yet have passed full Council

Allentown, Pennsylvania: City Council Bill 61 purports to “prevent[] any statement concerning any pregnancy-related service or the provision of any pregnancy-related service that is deceptive.” The bill defines any “limited services pregnancy center” as “a pregnancy services center that does not directly provide, or provide referrals for, abortions or emergency contraception” and restricts that center’s speech in public statements, newspapers or other publications, advertising devices, Internet, or statements. The bill is coming up for a vote soon. Read more at Live Action News.

Easthampton, MA: On May 4, 2022, Council members Owen Zaret, Koni Denham, and Salem Derby submitted their proposal, modeled after ordinances in San Francisco and Somerville. The ordinance reads, “No limited services pregnancy center, with the intent to perform a pregnancy-related service, shall make or disseminate before the public, or cause to be made or disseminated before the public, in any newspaper or other publication, through any advertising device, or in any other manner, including, but not limited to, through use of the Internet, any statement concerning any pregnancy-related service or the provision of any pregnancy-related service that is deceptive, whether by statement or omission, and that a limited services pregnancy center knows or reasonably should know to be deceptive.” Violators of the ordinance could be subject to fines of up to $300.

Councilor Zaret claimed PRCs “offer only non-medical options” and ” target certain communities including minorities and black/brown people.” Zaret also claimed to media that the ordinance, which doesn’t include for-profit abortion facilities, is about consumer protection.

On August 3, the Council ruled that no vote would be taken at this meeting and the subject would be sent back to committee for further review.

The proposal seems to have been suggested by pro-abortion organizations. According to MassLive.com, Mayor Nicole LaChapelle said she was approached earlier in the year by Reproductive Equity Now to enact the ordinance. City Councilor Owen Zaret said Planned Parenthood suggested that he propose the ordinance, entitled, “Deceptive Advertising Practices of Limited Services Pregnancy Centers.”

Los Angeles, CA: According to Spectrum News1, on August 4, 2022, “Los Angeles City Attorney Mike Feuer proposed a law… that would prohibit pregnancy service centers from misleading people about reproductive health services, including abortion, with tactics such as false advertising. The proposed ordinance, which Feuer sent to the city council… has not yet been endorsed by a council member but would take effect immediately if passed. It would be enforced by Feuer’s office, with fines of $10,000 per violation [emphasis added]. It would also allow victims to sue for compensation if they believe they have been misled,” they reported. “Feuer declined to say whether his proposed law — which bears some similarities to a San Francisco law passed in 2011 that prohibits false advertising from limited-services pregnancy centers — was preemptive.”

[UPDATE: The LA City Council approved the ordinance October 21, 2022. You can watch the Council meeting here.]

🚨Calling upon the City Council to take up our proposed law on crisis pregnancy centers and to enact it with the urgency it deserves. #RoeVsWade pic.twitter.com/5xp8YO7Oge

Seattle, WA: According to an extremely biased report from Fox13 Seattle, the City Council is considering a proposal (CB 120399) to limit the advertising of pregnancy centers. The bill, sponsored by Tammy J. Morales, Lisa Herbold, placed on the August 12, 2022 agenda of a committee of the Council, would implement “AN ORDINANCE relating to limited services pregnancy centers; prohibiting false and misleading advertising by limited services pregnancy centers; and adding a new Chapter 7.32 to the Seattle Municipal Code.”

According to the bill summary, “This ordinance would define ‘limited services pregnancy centers’ in the Seattle Municipal Code (SMC) and make applicable to these centers specific prohibitions against false advertising, the making of false statements, and statements of omission with respect to the provision of pregnancy-related services. It would allow for enforcement of violations either via notice of violation or civil citation.”

The bill’s sponsors claim PRCs “use advertising that targets people of color” and “may also advertise that their services are provided free of charge, an offer that targets individuals who are economically disenfranchised.”

Supporting documents linked to a pro-abortion report published by The Alliance, an extreme pro-abortion organization whose claims have been previously debunked by Live Action News.

Planned Parenthood, which has had multiple privacy breaches and violations, has also been caught lying about the limited services it provides. For years, the corporation claimed its affiliates provided prenatal care, but an undercover investigation revealed that few affiliates provided this service despite listing it on their websites.

Soon after this was exposed, Planned Parenthood scrubbed “prenatal care” from its website listings.

Live Action has exposed the misleading way Planned Parenthood’s abortion video has portrayed the preborn baby as a dot. This type of deceptive marketing serves to dehumanize the child in the womb, allowing the abortion industry to more easily profit from a potentially vulnerable woman or teen experiencing an unplanned pregnancy. Here’s what a preborn child actually looks like in the womb:

If these lawmakers really want to end deceptive practices, they are targeting the wrong organizations.

Editor’s Note: This piece will be updated as necessary.