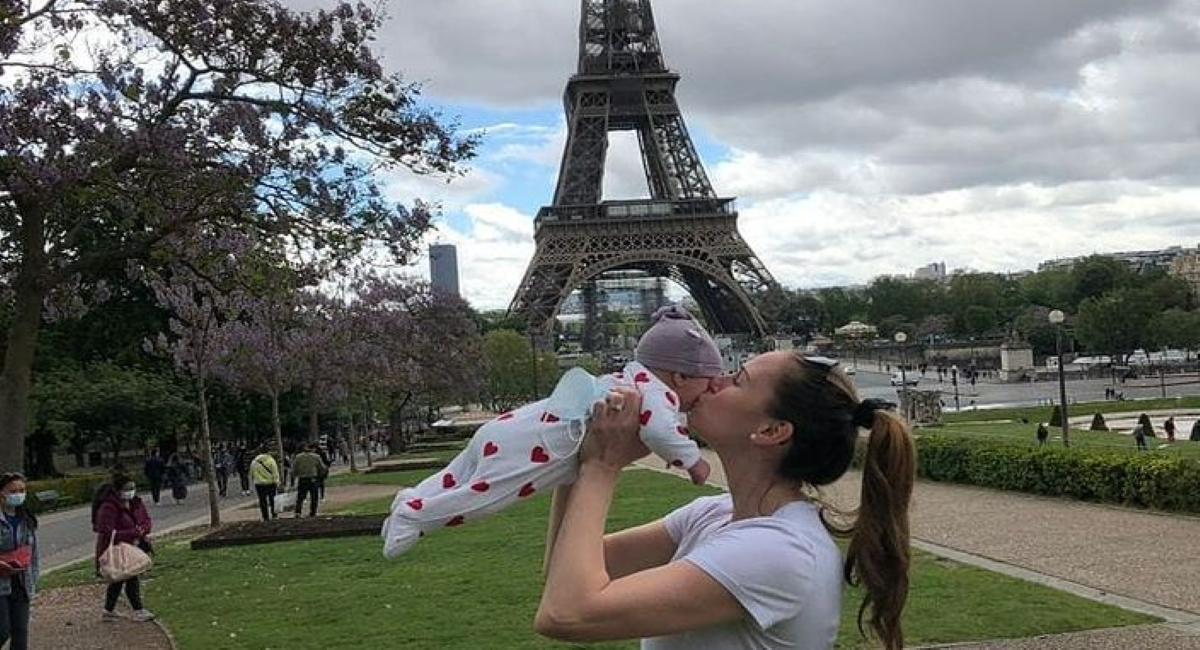 UPDATE, 7/1/21: Tokyo Olympic organizers have reversed their decision and have chosen to allow athletes who are nursing mothers to bring their infants with them to the Olympic Games. MSN reported:

“To all of the working moms out there who have had to fight this fight before, I think it was just a really good day for women in sport today,” Gaucher said on Wednesday, one day after she was officially named to Canada’s Olympic basketball roster.

Gaucher also said in response to the decision, “Being a mom is really hard, but it’s also one of the best jobs that I could have. When I started this whole thing, when I said I wanted to come back for the Olympics, I wanted to be able to inspire not just future young Canadian basketball players, but my daughter Sophie, to be able to tell her that I gave it my all.”

6/29/21: Basketball player Kim Gaucher, 37, has already competed twice for Canada at the Olympics, having played at London 2012 and Rio 2016. Now, as the country’s team heads into the Tokyo Olympics ranked fourth in the world, Gaucher is facing an agonizing decision: compete in the Olympics or continue breastfeeding her three-month-old daughter, Sophie.

In an impassioned Instagram video earlier this week, Gaucher noted that family members of athletes are prohibited from attending the Tokyo games due to COVID-19 fears in that country. Consequently, Gaucher is expected to leave her young breastfeeding daughter for 28 days to travel with the team. She has requested an exemption to allow both her husband and Sophie to travel to Tokyo so that she can continue breastfeeding while she competes, but so far has met with no success. 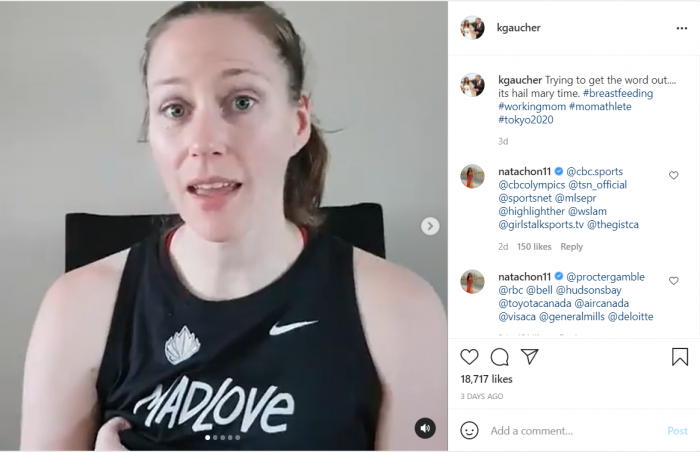 Gaucher, who began playing for Canada 20 years ago while still in high school, opened the video by noting, “All I’ve ever wanted out of my basketball career is to rep Canada at the Olympics. Last year my teammates and I qualified for Tokyo but right now I’m being forced to decide between being a breastfeeding mom or an Olympic athlete. I can’t have them both. Tokyo said no friends, no family, no exceptions.” She continued, “Athletes and media are all flying in from around the world. Japanese fans are going to be in attendance. The arenas are going to be half-full. But I will not have access to my daughter?”

Gaucher noted the impossibility of training as a high-level athlete, “getting my butt back in shape,” meeting Sophie’s current nutritional needs and somehow pumping 28 days worth of milk in the five weeks leading up to the Olympics. She has already explored the option of shipping milk but has met with complications.

Gaucher went on, “We’ve gone all the traditional routes. We’ve tried appeals. Everybody says they’re on-board but nobody can do anything. We need the help of the internet…Let’s see if we can make a difference. It’s 2021. Let’s make working moms normal.”

“The Canadian Olympic Committee and Canada Basketball recognize how difficult this situation is and have been supporting Kim at her request. In any other Games scenario, we would have long ago found a solution. The Tokyo Olympic Games are understandably being conducted with an unprecedented focus on health and safety, this includes Japanese borders being closed to overseas visitors, family and friends. The COC and Canada Basketball have made an appeal to the Tokyo 2020 Organizing Committee so that Kim can have her daughter and husband in Japan while she competes at her third Olympic Games. We are awaiting an official response while Kim continues to train and travel with Canada Basketball to prepare for the Games.“

A supportive former teammate of Gaucher’s who has two children of her own decried the position Gaucher is being put in. Teresa Gabriele said, “When you have a kid, there’s really nothing better. And now she’s being put in this position. I would not want to be in that position. You would hope that in this day-and-age people would understand that women are trying to play sports longer.”

Live Action News has previously noted a tendency in the professional sports world and in Hollywood to pressure women to have abortions rather than parent and pursue their careers. Sadly, the rampant availability of contraception and abortion have worsened rather than improved women’s ability to negotiate on their own terms when it comes to job opportunities, as their fertility and childbearing are viewed as burdens and liabilities. Even in 2021, female working professionals still face pregnancy discrimination. A society that fails to embrace fertility and childbearing as healthy and normal will continue to be impervious to reasonable requests made by women like Gaucher, who understand that motherhood and professional success need not be mutually exclusive.