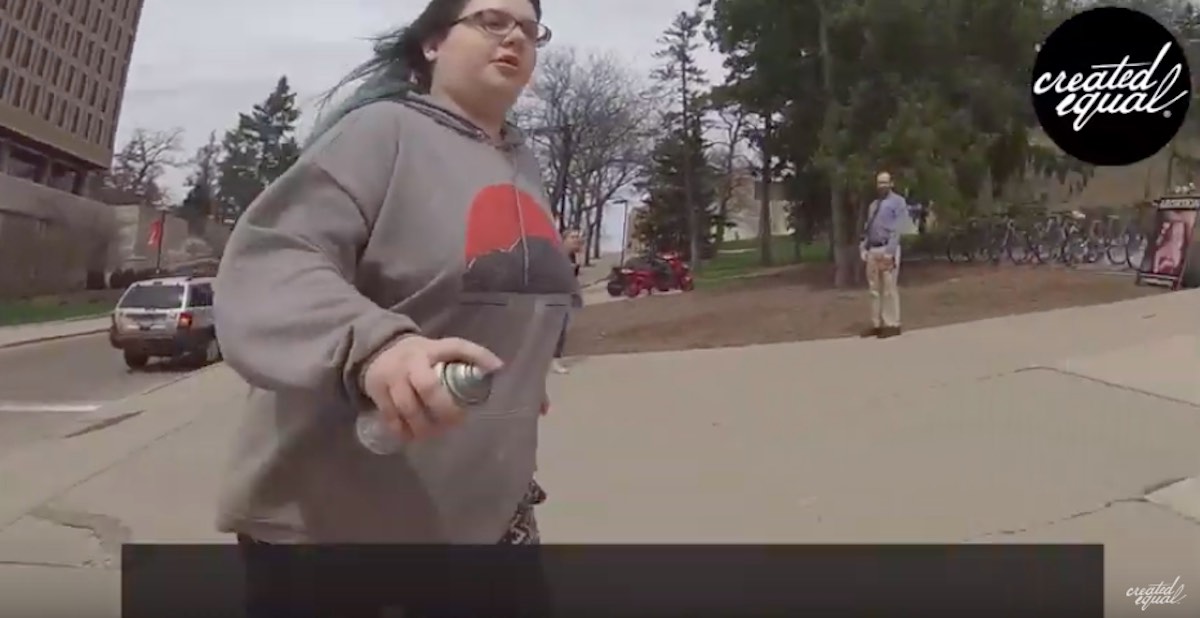 The mainstream media and other pro-abortion organizations frequently attempt to paint pro-lifers as violent. But they never seem to give equal lip service to violence committed by pro-choice activists towards pro-lifers. This year alone, Created Equal has experienced multiple acts of vandalism and even physical assaults on team members manning pro-life displays on college campuses and in other public places.

The latest incident occurred at the University of Wisconsin-Madison in June. In a clearly pre-meditated act caught on video, an angry pro-choice woman drives up and parks next to a display, storms toward the Created Equal team members, and begins spray-painting their signs of preborn children. Warned by Created Equal team members that what she is doing is illegal and that the police will be called, she seems unfazed, responding, “Go ahead. F*ck you. They’re [the images] triggering. They hurt people.”

She continues to repeatedly knock over the signs, at one point shoving a staff member in order to get to them. The audio from the incident reveals that another individual present addressed the woman, pleading with her to stop, saying, “As someone who agrees with you, you’re not doing the right thing here!” (WARNING: Profanity.)

Video from the woman’s questioning by police shows her unremorseful, saying, “Like, three girls walked by and they said that I’m a hero,” then laughing. Asked by an officer how she thinks the demonstrators felt that she was damaging their property, she responds, “I honestly don’t care how they feel.” The video ends with the woman being issued two misdemeanor charges and having a court date set to appear before a judge for sentencing.

READ: The pro-life position isn’t one of ‘force’. It’s one of of non-violence.

Because abortion itself is an act of violence towards a vulnerable member of the human race, it should be no surprise that abortion supporters sometimes feel justified in using violence towards those with whom they disagree. Live Action News reported just last week on another recent Created Equal display, this time in Columbus, Ohio. Yet in a surprising turn of events that began with confrontation, a pro-choice woman who initially knocked over Created Equal’s signs ended up having an extended, productive dialogue with several team members.

Other attacks on Created Equal displays from this year alone are summarized in a shocking video released in May:

Violence is never the answer, whatever a person’s beliefs about abortion. Pro-lifers need to raise awareness about acts of violence, calling them what they are and demanding justice. All people should be free to exercise their First Amendment right to free speech peacefully, without fear of property damage or physical attack.