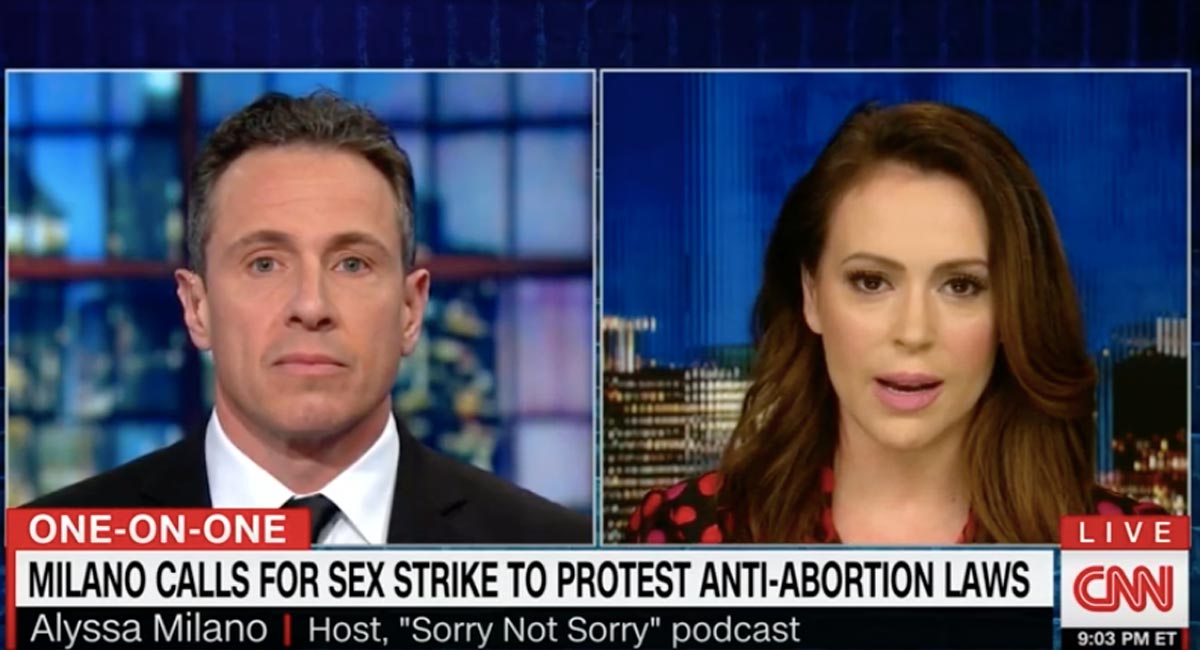 Actress Alyssa Milano joined Chris Cuomo on his CNN show “Cuomo Prime” on Tuesday to discuss her sex strike and the pro-life laws that have her all worked up. And true to form, Milano made some shocking statements.

Milano, who called for a sex strike in response to Georgia’s “Heartbeat Bill,” acted as if she hadn’t been completely serious about wanting women to go on a sex strike until the pro-life laws are overturned, however that may be because she realized how ridiculous it was. She claimed she sent out the #sexstrike tweet in order to raise awareness about the “ridiculous” bills and says that her plan worked. But she also made sure to let Cuomo know that women “don’t just need men for pleasure” thereby reducing sexual relationships to nothing more than a good time.

But one of the more shocking statements Milano made in her eight minutes speaking with Cuomo was that she is “pro-life.”

“I don’t think there’s a human on the planet that’s not pro-life,” she said. “Nobody wants to get an abortion. Nobody. We are all pro-life, but there are circumstances that we cannot avoid.”

It’s an unbelievably inhumane and anti-woman statement to make, and unfortunately, many Americans agree with her. And it’s completely inaccurate. Some people actually love abortion. Why else would groups like Planned Parenthood encourage women to “shout” their abortions with pride?

But if Milano is right and it’s true that “nobody” wants an abortion then the term “pro-choice” can be flushed down the toilet. If all women who have aborted didn’t actually want to abort then that means that they didn’t have a choice. That means they felt forced into aborting, whether because of finances or age or relationship status. And feeling as if you have no option other than abortion, means you never had a choice at all.

If this is true, then wouldn’t the pro-woman, pro-love response to unplanned pregnancies or high-risk pregnancies be to help the woman achieve what she does want? That’s what pro-life pregnancy centers do every day. They help women to give birth to their babies and stay in school or advance in their careers. They help women find housing and escape domestic violence rather than sending them back to the homelessness or abuse they were living with. They help women place their children with loving families — of which there are 36 for every one baby available to adopt.

So what are the more-important-than-life circumstances to which she is referring?

1. The mother’s health. But unbeknownst to Milano, abortion is never actually necessary to save a mother’s health or life. Never. Not even once. Abortion intentionally ends the life of a child in the womb, targeting that child for deliberate destruction. If a mother’s life is in immediate danger, an emergency delivery of the baby at a hospital would be the treatment (treating that baby as a second patient and a human being with dignity), not a sometimes days-long procedure done by an abortion facility.

3. It’s an “economic issue.” But killing a human being is never the answer to an economic problem. Abortion doesn’t magically lift women out of poverty. It doesn’t magically hand them their college degree. It doesn’t get them a promotion. Women might feel like they have to have an abortion in order to finish their degree or advance in their career but again, that just means that abortion isn’t about choice — it’s about fear and societal pressure.

Milano wants us all to think about how our vote will matter in 2020, not just for the presidency but for the Senate as well. She wants to focus on women’s issues. But abortion isn’t a women’s issue. It’s a human rights issue.