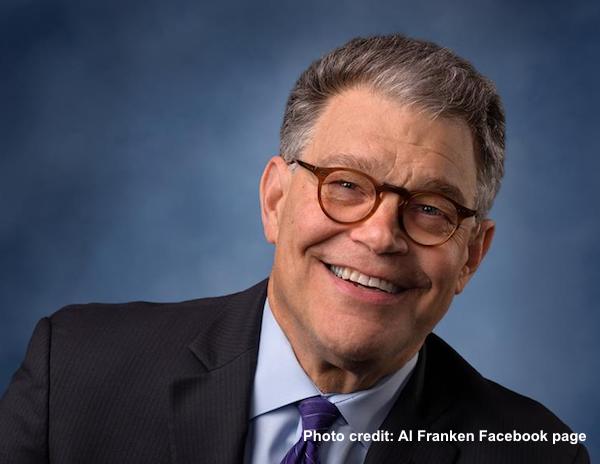 Pro-abortion Senator Al Franken (D-MN) has been accused of unwanted sexual behavior, and the conversation around his actions continues. Franken confirmed the allegations, but Planned Parenthood remains silent on a man the organization went out of its way to campaign for.

While new allegations come to light every day about a variety of people in the public eye — including Franken, Matt Lauer and Congressman John Conyers (D-MI) to name the most recent — Live Action News reported in 2012 that Franken had “joked” about raping women. Franken is well-known as a performer on “Saturday Night Live,” but clearly, some things are not appropriate comedy material.

Franken also supports abortion, and on his own website, in the “Women’s Health” section, he boasts:

Franken has served in the Senate since 2009, and in 2015, he had already made it onto a list of 25 politicians who received the most money from Planned Parenthood.

The statement quoted Sarah Stoesz, President and CEO of Planned Parenthood Minnesota, North Dakota, South Dakota. She referred to Franken as “another strong advocate for the health and well-being of Minnesota women and families working in Washington.”

Support for Franken has not aged well, as Twitter has wasted no time in pointing out.

It’s a sad truth that Richards has remained silent on the allegations against Franken and the glowing remarks she and her organization made about him only a few years ago.

When the facts about Planned Parenthood are considered — and there is plenty of evidence thanks to investigative footage from Live Action, The Center for Medical Progress, and others — it’s not surprising the abortion giant would support an alleged sexual wrongdoer. The situation surrounding Harvey Weinstein was similar, as Planned Parenthood had connections there, too — least of all being that Weinstein had donated millions.

While Planned Parenthood has publicly distanced itself from Weinstein since allegations of his sexual misconduct, ranging from groping to rape, have come forth, the evidence paints a different story on the abortion chain’s culpability. Countless less famous predators than Weinstein have sent their victims to Planned Parenthood, and the abortion corporation has dutifully covered up.

For a decade now, Live Action has been investigating the facts. One of the first video projects featured Live Action founder and president Lila Rose, posing as a teen impregnated by an older man.

When Rose went to various Planned Parenthood locations across several states, rather than reporting the statutory rape, the abortion corporation’s staff advised her where she could go across state lines to have an abortion. Their goal was to help a victim of sexual abuse circumvent parental consent and notification laws which are meant to allow parents to protect their minor children.

In the video above, at an abortion facility in Bloomington, Indiana, Rose tells the staffer she is 13-years old and her boyfriend is 31-years old. In response, the staffer said, “I didn’t hear the age,” adding “I don’t want to know the age.”

Another investigative project shows Planned Parenthood willing to help pimps (the definition of a sexual predator if there ever was one) obtain abortions for sex trafficking victims, including for some who are underage and who may not speak English.

Planned Parenthood: Covering Up for Perpetrators and Silencing Victims

These investigations shocked decent-minded people when they were first released years ago. Ramona Trevino, a former manager at Planned Parenthood who is now a pro-life activist, confirmed the role the abortion corporation plays in sex trafficking, including how they routinely look the other way.

Many sexual abuse victims who are taken to Planned Parenthood only have their abuse compounded. The corrupt abortion chain sends victims back to their abusers and covers up the damage.

Live Action News contributor Adam Peters has written for years about the rapists and sexual abusers Planned Parenthood has helped. Cassy Fiano, another contributor, compiled more examples. In a two-part investigative article series, Carole Novielli used examples from numerous states to show how the cover-up of sexual abuse has continued at Planned Parenthood for decades.

Planned Parenthood opposes virtually any and all regulations or restrictions on abortion. This includes the parental consent and notification laws, which, the abortion chain would rather circumvent.

The horrors of rape countless young women experience are traumatizing enough. Many, however, go to Planned Parenthood only to see the trauma continue. Often, the abortion is sought by the woman’s rapist, and an innocent child’s life is taken to cover up his crime. When incest is involved, the girl goes back home after the abortion only to be victimized again.

Multiple Planned Parenthood locations have also been accused of coercing women or even forcing them into abortion.

If sexual assault is bad — and it is, without question — what does that make abortion? Abortion is the direct and intentional killing of a vulnerable, innocent, and defenseless human being. It is using another human being’s body for purposes that damage that human being. And, it is a forever scar on a woman. Women suffer from their abortions, physically and emotionally. This includes women who regret their abortions after rape, when they come to realize that no child should be executed for the crimes of her father.

Planned Parenthood is only serving to compound abuse and harm for women by committing abortions.

The abortion giant has lied to and misled the public before, from the services they provide, to what happens during abortion procedures, to why pro-abortion politicians are supposedly such heroes for women. The truth, however, always finds a way to seep out…just as it has done with Planned Parenthood’s silence on Franken.