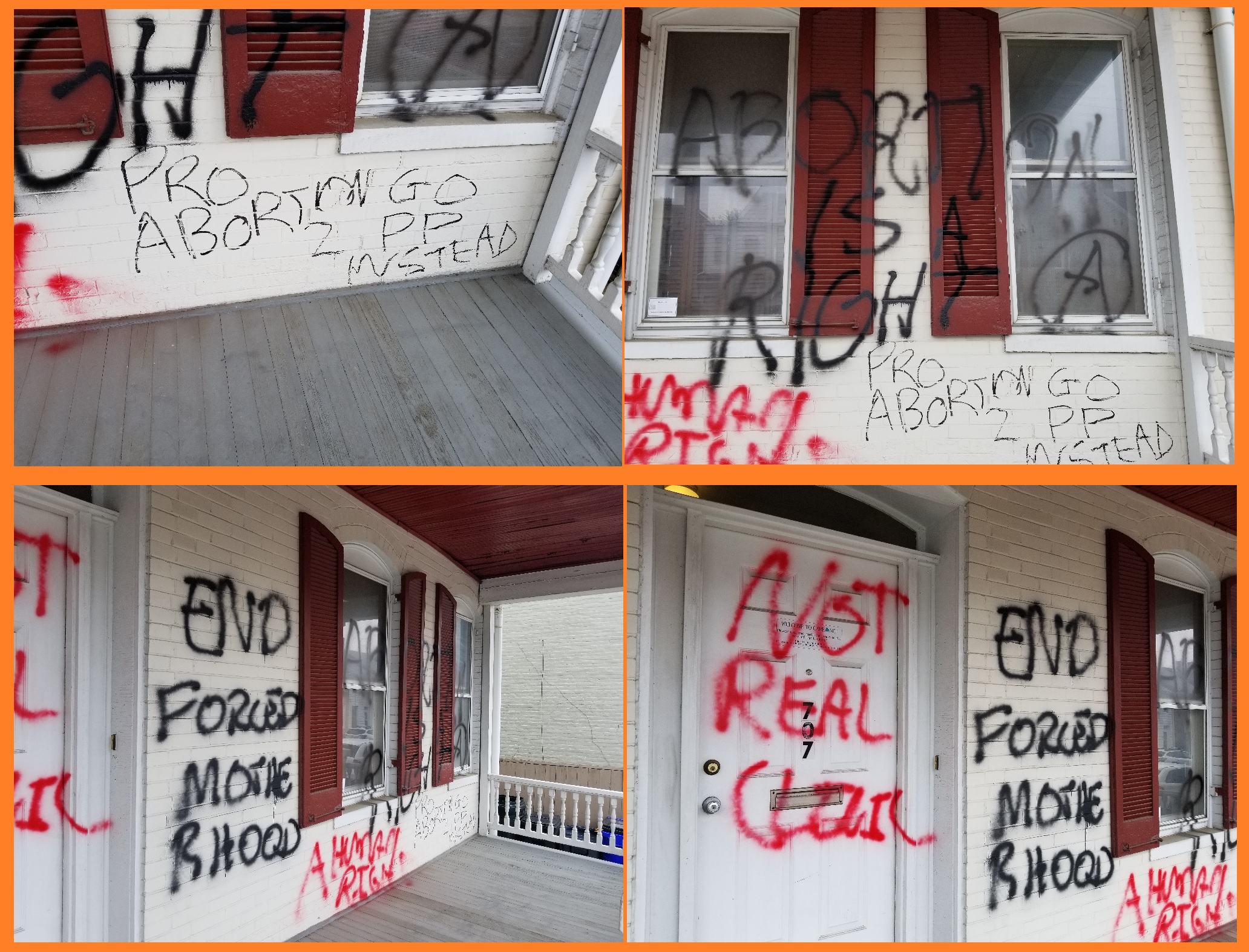 Abortion violence against pro-life groups has ramped up in recent days since the leaked Supreme Court draft opinion in the Dobbs v. Jackson Women’s Health Organization case, suggesting the 1973 Roe v. Wade decision may be overturned.

Now, another report from Maryland indicates that the front porch of the CareNet Pregnancy Center of Frederick was defaced with spray painted pro-abortion messages that read: “ProAbortion,”  “Go to PP Instead,” “Abortion is a Right,” “Not Real Clinic, “End Forced Motherhood.”

“On Wednesday, May 4th, the staff arrived at the center to the disturbing scene of lies and propaganda spray painted on the front of our building. Unfortunately, this is not the first time our center has been vandalized. We were previously vandalized twice in 2014 in the same manner,” Linda King, Executive Director of the Pregnancy Resource Center (PRC) told Live Action News.

King called the vandalism an “an attempt to intimidate our staff and volunteers; and to mislead our clients.”

“Pro-abortion activists feel threatened by us because they don’t understand that we give women and men an alternative to the abortion clinic and provide a real source of hope,” King also stated.

This most recent incident means the center has been attacked three times since 2014 when vandals graffitied the back of the facility and then threw a brick at the door. “Those messages are similar to ones left in previous incidents, except ‘end forced motherhood’ which I don’t recall being part of previous graffiti,” King said. “The A in Circle symbol that has been common through all three vandalisms,” King added.

King said the center remained open despite the attempt to intimidate their staff, and thanks to the generosity of donors, the graffiti was removed, and the porch repainted by the end of the same day.

“It is unnerving when you see the outright lie that we are not a clinic, which we are – we gathered together and debriefed, made sure we are all good, and aware of our surroundings,” she added.

King said that while the PRC has security cameras in back of building, they will be installing them all around the building to make clients and staff feel as safe as possible.

The violence will not deter the staff, King said. “In spite of these tactics, we will not be deterred from doing what we’ve been doing for 39 years in the Frederick community. Our doors remain open to women and men making a pregnancy decision. Whether they need limited medical services to confirm pregnancy, compassionate education about their options, or helpful classes on pregnancy, parenting, and life skills; we are here for the women, men and families in Frederick.”

When people understand what we do, they understand that we are a valuable part of our community. Over the last five years, 99% of our clients have been satisfied with the care and service they received.

Live Action News and others have documented multiple acts of violence against pro-life people or groups in recent days including:

Pro-abortion groups like RuthSentUs allegedly posted GPS coordinates to the homes of SCOTUS Justices and threatened to “burn the Eucharist” of Catholic Churches. Other groups like StrikeForChoice.org and RiseUp4AbortionRights appear to be organizing various protests, walk outs and strikes.

It is not clear whether these acts of violence across the nation are random or tied to a single group. But, in recent days, a group called Jane’s Revenge has allegedly taken responsibility for the arson attack at Wisconsin Family Action. The anonymous group’s communique was sent to a journalist and then posted to Twitter. It is allegedly demanding “the disbanding of all anti-choice establishments, fake clinics, and violent anti-choice groups within the next thirty days.” The abortion rights group claims they will “adopt increasingly extreme tactics to maintain freedom over our own bodies” and “adopt the minimum military requirement for a political struggle.”

The Thomas More Society has issued a letter warning pro-abortion groups that if they threaten a place of worship, there could be “significant legal liability” under federal law for these actions. The attorneys are referring to the federal F.A.C.E Acts, which they say makes these activities illegal. To date, there has been no published national task force organized to catch and prosecute groups or individuals threatening violence against pro-lifers.