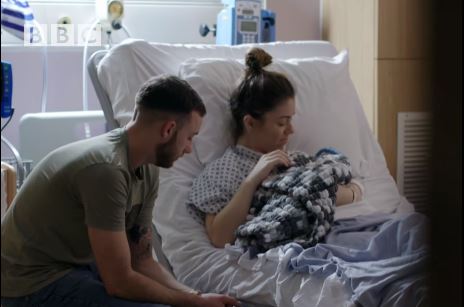 UK couple Lauren and Gary were excited to learn they were expecting twin boys, whom they named Bobby and Albi. Lauren knew life was going to get busy, but she was looking forward to it. Then the couple learned that one of the boys had anencephaly, a condition in which the top of the skull does not form properly, and was not going to survive. The couple, who has an 18 month old daughter, shared their story on a BBC show called Hospital.

Doctors told the heartbroken couple that they could abort Albi. Lauren was 15 weeks and three days along. Doctors said they could inject Albi’s heart with digoxin to kill him, and then she would deliver him along with Bobby, but dead. Or she could carry them to term with the risk of premature delivery, as well as the possibility that Albi might die in the womb.

READ: Mom chooses life for baby with anencephaly: ‘She can feel our love’

“Without a doubt I choose to carry them both,” she wrote in an essay. “[…] I loved them both as equal as each other and we would hopefully like to meet them both together and make lots of memories in his short little life he’s going to have.”

Lauren, who called Albi a “little livewire” as he moved around on the ultrasound screen, could not imagine killing him. “I’d seen him moving,” she explained. “I’d seen his heartbeat. I’d got a little bond with him.”

They loved Albi, and saw no purpose in ending his life prematurely. They also found hope in the possibility of donating his organs to another child who would die without them. However, that dream was dashed when fluid began to build up around Albi, and a C-section had to be scheduled at 34 weeks – before Albi would be big enough to donate his organs.

“It’s been hard,” said Lauren’s mother Debbie, “because it’s like watching my little girl go through it, it’s like a crash waiting to happen.”

Then at 33 weeks, one week ahead of the schedule C-section, Lauren’s water broke.

Bobby was born first, via emergency C-section. Albi arrived four minutes later, and lived for over two hours. Each of those minutes with him was a precious moment that his parents feared they would never get. “We was happy to see them both together, weren’t we?” said Gary. “It was a really like a happy moment, but in the same sense, like, sad.”

They kept Albi with them for four days before having to say goodbye and telling him one last time that they love him. “He’s our baby,” said Lauren. “[…] He’ll always be in my heart.”