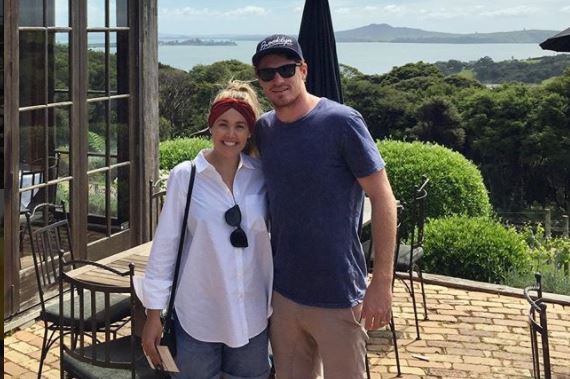 At their 11-week pregnancy scan, Australian football player Gary Rohan of the Sydney Swans and his wife Amie learned that one of their preborn identical twins has a health condition that usually leads to death within hours of birth. Anencephaly is a condition in which the brain and skull do not develop properly and it labeled as “incompatible with life.”

“[We are] over the moon to share with you all that we have been blessed twice over,” Rohan wrote on Instagram. “Sadly, one of our beautiful bubs has been diagnosed with anencephaly. […] BOTH our babies are beautiful, precious human beings, with the only thing being that sadly one’s life is destined to be cut short.”

Rohan wrote that he and his wife were “constantly discussing what we should do” and in many cases of anencephaly diagnoses, an option doctors suggest is abortion.

“But for me, whatever you do to one [twin] affects the other,” Amie Rohan told news.com.au. “Our specialist gave us all the options, but I said this is the journey I’ve been given and this is the situation I’ve been put in and I’m more than happy to carry the baby to full term.”

@amierohan_ and I are over the moon to share with you all that we have been blessed twice over ????❤️ Sadly, one of our beautiful bubs has been diagnosed with anencephaly. Anencephaly is a condition where part of the brain, skull and scalp never develops. Our brain is very sensitive, so to live our brain must have cushion and protection. Since our brain tells our heart to beat, our lungs to breath, our legs to move and so on, these babies live from a few moments to a few hours after birth. Babies born with anencephaly are not compatible with life. Ames and I have known about this since our 11 week scan, and since knowing, we’ve been constantly discussing what we should do, how we should tell people and if we should tell people at all. We come to the decision that either way, BOTH our babies are beautiful, precious human beings, with the only thing being that sadly ones life is destined to be cut short. There are going to be some really difficult days ahead but also many happy ones, and we want to share each and every one of those moments with you all. Talking about our situation with people has been our therapy, letting our emotions out has been the best thing for us personally. We would love for anyone who has been affected by anencephaly themselves or know of others affected by anencephaly to please contact us. Don’t be afraid to talk to us about it. That’s what we want, we want people to ask questions, we want to talk about it with others. We still need questions answered as much as everyone else. And at the end of the day, we will always be parents to twins, our journey has just been written a little differently to others. All our love Gaz & Ames xx

The couple struggled with telling their family and friends the news, including Amie’s brother who is also an expectant father. She called it a “very difficult and emotional” moment. But despite their emotional turmoil, they have decided to focus on the positive.

“People keep saying to me ‘I’m sorry’ and I say ‘What are you sorry for? I’m having twins, I’m going to be a mother to twins for my whole life, whether they are here for one second or one week,” said Amie Rohan. “My midwife said to me, ‘Babies are beautiful. Yes their heads are a bit smaller and they don’t really have a neck, but they are still beautiful babies.”

In an Instagram post, Rohan asked other parents of children with anencephaly to contact them. Countless parents took them up on that and sent messages of encouragement and support, including at least one parent who chose to terminate and lives with regret:

jenelleblevinsWe have been through this – our daughter Josephine Martha was born in 2013. We carried to term and by making that decision we were pretty much on our own when it came to doctors until we found those who would actually help. I was adamant about carrying to term from the minute we found out. I will tell you this right now – NO day or experience is worse than the diagnosis day and so many others say exactly the same thing. <3 We were totally open with everyone from the start and it was the best thing we did. Please drop me a line – I’d love to share some resources with you.. we are in Melbourne and will be happy to help in any way we can.

sargechantWe had this happen to our second child in 2008. We were told termination best option as not compatible with life. Having to terminate was the worse thing ever – easy to say you’ll do it but when the time comes it is devastating. We didn’t address it or deal with our grief at the time. We lost more after with miscarriages but it was the termination that stuck with me the most. We couldn’t have another child. I’m a police officer & considered myself lucky as there a people going through worse than me – but it wasn’t until this year – 2017 that with some additional stresses in life the grief of our anencephaly baby hit home – I didn’t know this was the ‘issue’ until I finally got help and my lovely psychologist picked it straight away that it was our termination that I hadn’t dealt with or grieved over. She taught me to cry, talk to our baby and not blame myself. So you guys are doing the right thing speaking about it now, you are so wise and brave. I wish we’d done the same at the time as it doesn’t go away. I am so sorry you are going through this, but your little one will always be with you & their beautiful twin & know they are loved by such a wonderful family ? x

holdingflowersIn April 2013 my middle child was born, she had Anencephaly. At the beginning of our pregnancy I was planning a homebirth and did not have an early ultrasound. At 33 weeks my midwife suggested one and this is when we found out and our daughter was diagnosed. We chose to fine continue with our pregnancy and let our little one live her life until she was ready to leave. Because of my own health problems (nothing to do with Anen), we were induced at 40.5 weeks and our little sweet Lucy was born into my arms. The day was beautiful, peaceful and perfect. She lived a full 33 hours in our arms, we took her home and had hospice to help care for her. We love our daughter and the love only gets deeper everyday. But oh how we kids [sic] her. Sending love as you carry your babies, sending peace and strength. If you’d like to see photos of our Lucy or read her story ➡️ #lucysunflower Also please reach out with any questions, I know I had so many when I found out.

Kari Williams, who in 2014 gave birth to her daughter Marley Jane with anencephaly and shared her story with Live Action, also offered support to the couple, saying, “In 2014 I gave birth to my beautiful baby girl who also had Anencephaly. She lives for 5 amazing hours. Please know you aren’t alone.”

READ: Baby Marley born with anencephaly gives hope to others

The couple wants to celebrate the lives of both of their babies and are taking the advice of other parents who faced the same diagnosis to heart.

“People have told us ‘We talk about ours everyday. We celebrate both their birthdays, they’re a part of their lives’,” said Amie Rohan.

“Others have said ‘We tell the other twin constantly about the baby, they constantly talk about them and run around saying “I have a twin.”‘ That’s what I want for our baby.”

The Rohans know that they have limited time with their baby and that after birth they will have to say goodbye, but they are enjoying the happiness they have now while both babies are still with them and they want everyone they know to share in that joy.

“There are going to be some really difficult days ahead but also many happy ones, and we want to share each and every one of those moments with you all,” wrote Rohan. “Talking about our situation with people has been our therapy, letting our emotions out has been the best thing for us personally.

“Don’t be afraid to talk to us about it. That’s what we want, we want people to ask questions, we want to talk about it with others. We still need questions answered as much as everyone else.

And at the end of the day, we will always be parents to twins, our journey has just been written a little differently to others.”