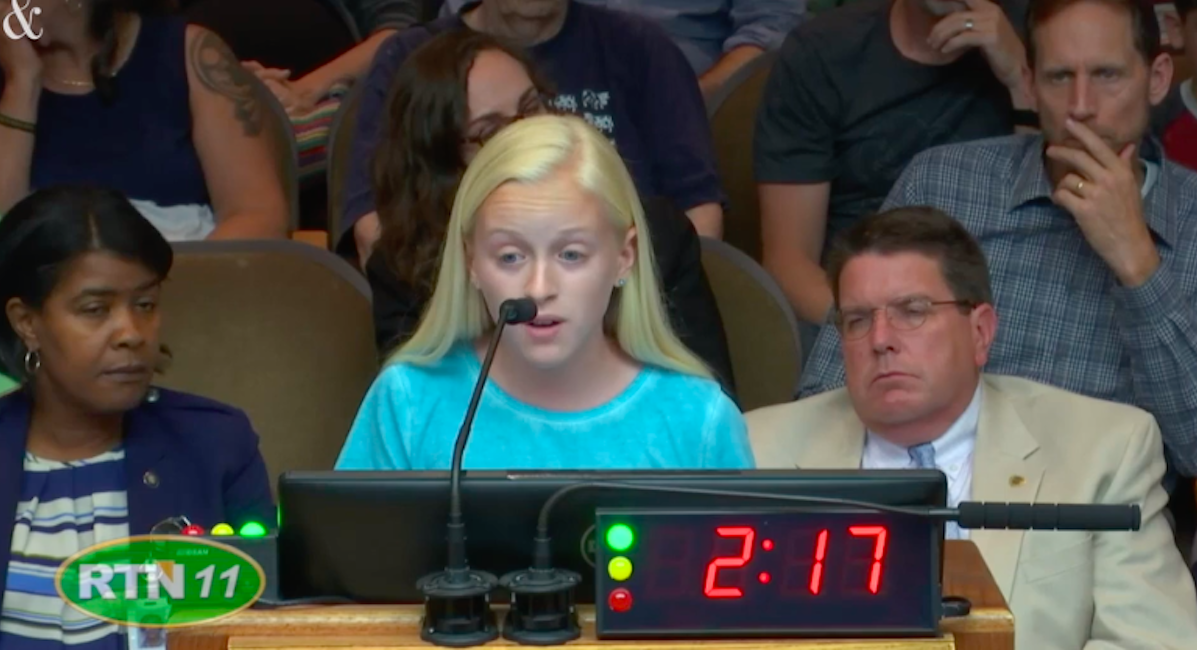 As Live Action News reported just last month, a growing number of city councils across the country are considering proposals to become “sanctuary cities” for preborn children. While the wording varies, proposed measures for sanctuary cities for the preborn generally include: 1) a statement affirming the value of all human life and that  life begins at conception, and 2) a commitment to assist pregnant women in their city, particularly those with unintended pregnancies.

In May of this year, a group of Raleigh, North Carolina, residents urged their city to become a sanctuary for preborn children.

On June 4th, 13-year-old Addison Woolsey, another resident of Raleigh, again advocated for sanctuary city status for the preborn, pleading for their rights to be valued along with their pregnant mothers. Miss Woolsey’s comments were met with shouting and cursing from abortion supporters, including several pro-choice African-American women who objected to her comparison of support for abortion to support for slavery. They shouted that because she wasn’t Black, she shouldn’t speak about slavery.

WATCH: Professor pleads with city leaders to create ‘sanctuary city for the preborn’

Abortion reminds me of slavery. Owners said that their slaves were their property and they could do whatever they wanted with them. Just how moms feel about their babies. My hope is that in a few years we’ll look back at abortion and think, “That was so cruel. I can’t believe we did that. Just how I look back at slavery. The question is, who will you be? The slave owner? … Rosa Parks ? Or Abraham Lincoln? Who are you going to be? Make a choice. My choice is made. I’m here today standing up for what’s right….

Abortion supporters routinely bring up one version or another of this same argument; namely, “you can’t speak about (fill in the blank) if you aren’t (fill in the blank).” For example, “you can’t speak about abortion if you aren’t a woman” (unless you are supporting abortion, in which case they no longer use this argument). But by this same logic, a person couldn’t oppose slavery if he or she wasn’t a slaveowner or a slave. They couldn’t oppose rape if they weren’t either a rapist or a victim of rape.

Fortunately, at the end of the 5-minute video, a city council member called the room to order, reminding audience members that uncivil behavior would result in escort from the room. One irate abortion supporter was led from the room on camera for this reason.

Rather than addressing Miss Woolsey’s arguments, abortion supporters attempted to invalidate her ability to speak at all. Attempting to nullify another person’s legitimacy to speak based on arbitrary qualifications (See also: pro-lifers are only pro-birth OR you’re not pro-life unless you also support x,y, and z social programs) makes constructive debate and seeking of common ground impossible.