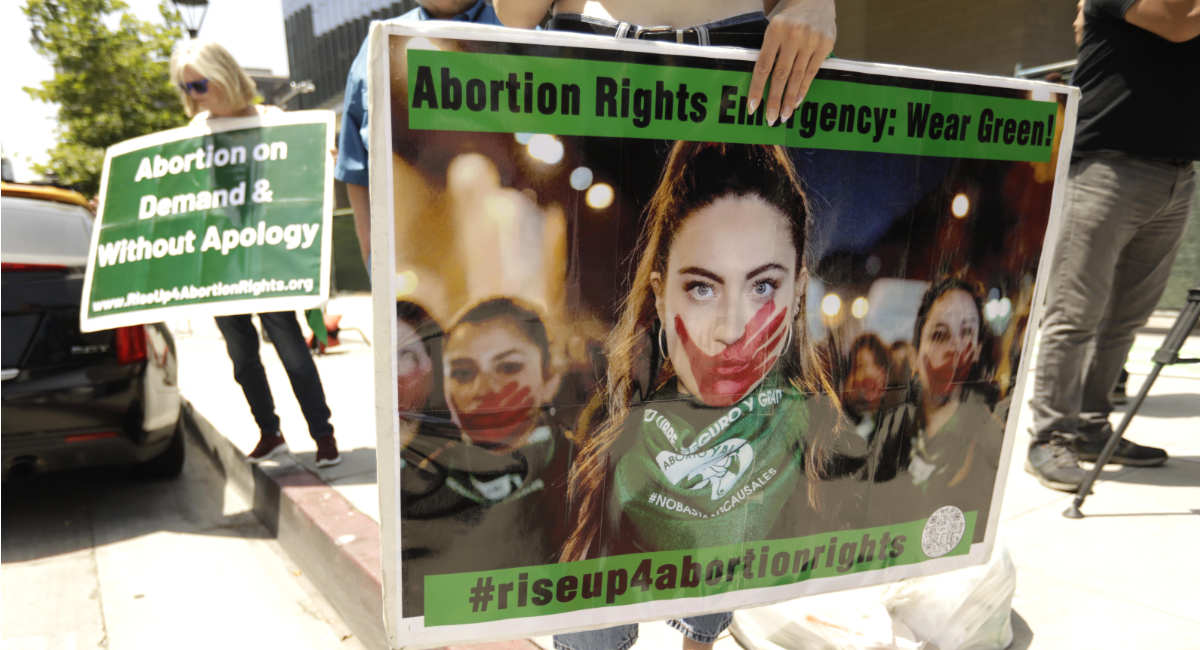 The pro-abortion group RiseUp4AbortionRights, which has been disrupting churches and large gatherings for weeks, is now being denounced by 13 other pro-abortion organizations who allege RiseUp is a “cult and pyramid scheme.”

Live Action News previously documented that while the name RiseUp4AbortionRights was launched in January 2022, it is actually a rebranded version of the revolutionary pro-abortion group, Stop Patriarchy, which is led by activists Sunsara Taylor, Lori Sokol, and millionaire abortionist Merle Hoffman. The group has been behind multiple disruptions at churches and public gatherings across the nation. In 2014, a separate group, Texans for Reproductive Justice, published a Letter of Concern opposing Taylor’s previous group (Stop Patriarchy).

The latest denunciation — in a tweet posted by NYC for Abortion Rights, an extreme organization which is hostile to pro-lifers who attempt to reach women outside Planned Parenthood — asked supporters to ignore RiseUp4AbortionRights, alleging that the pro-abortion organization is a “cult and pyramid scheme,” and warning that RiseUp, “is an offshoot of the RevCom (Revolutionary Communist Party) group.” 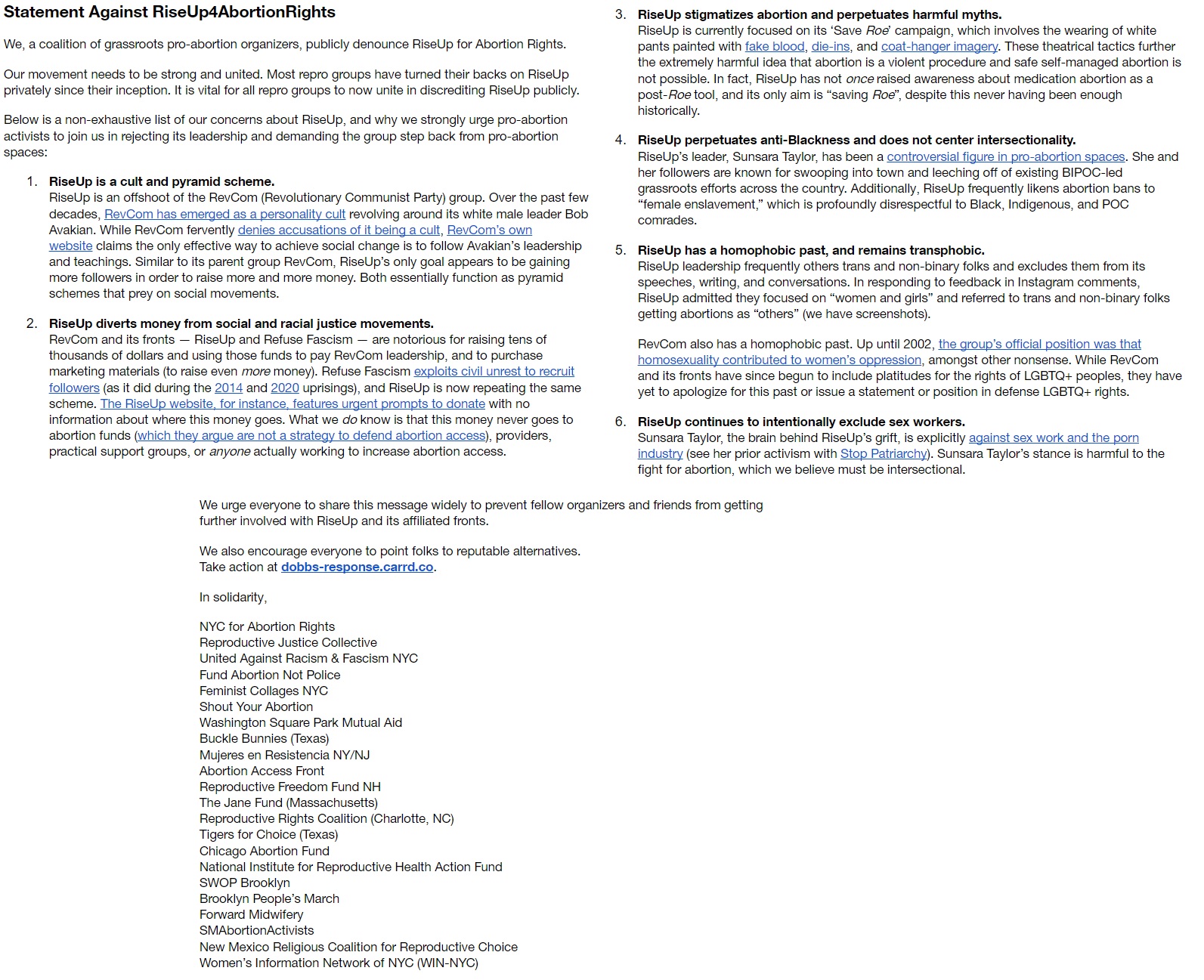 “Over the past few decades, RevCom has emerged as a personality cult revolving around its white male leader Bob Avakian. While RevCom fervently denies accusations of it being a cult, RevCom’s own website claims the only effective way to achieve social change is to follow Avakian’s leadership and teachings. Similar to its parent group RevCom, RiseUp’s only goal appears to be gaining more followers in order to raise more and more money. Both essentially function as pyramid schemes that prey on social movements,” the statement claimed. 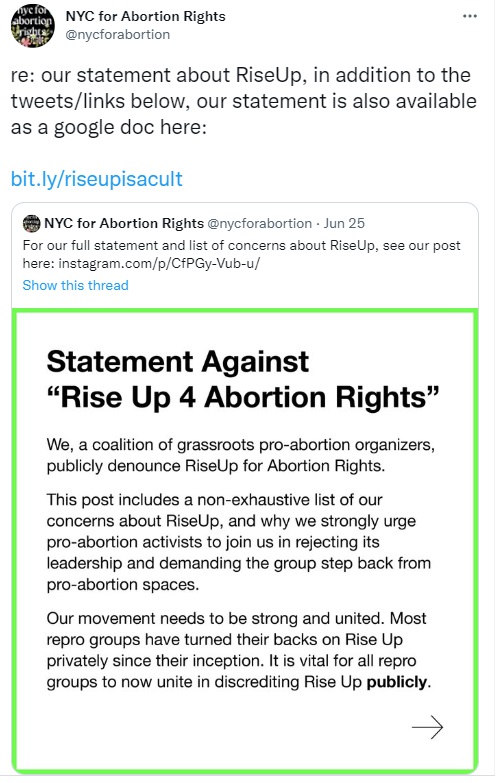 The statement also alleges that RiseUp4AbortionRights, “diverts money from social and racial justice movements,” claiming that, “RevCom and its fronts — RiseUp and Refuse Fascism — are notorious for raising tens of thousands of dollars and using those funds to pay RevCom leadership, and to purchase marketing materials (to raise even more money),” the statement claims.

“Refuse Fascism exploits civil unrest to recruit followers (as it did during the 2014 and 2020 uprisings), and RiseUp is now repeating the same scheme. The RiseUp website, for instance, features urgent prompts to donate with no information about where this money goes. What we do know is that this money never goes to abortion funds (which they argue are not a strategy to defend abortion access), providers, practical support groups, or anyone actually working to increase abortion access,” the allegation also states.

The statement also claims RiseUp “continues to intentionally exclude sex workers… has a homophobic past, and remains transphobic… perpetuates anti-Blackness and does not center intersectionality… stigmatizes abortion and perpetuates harmful myths.”

“RiseUp is currently focused on its ‘Save Roe’ campaign, which involves the wearing of white pants painted with fake blood, die-ins, and coat-hanger imagery. These theatrical tactics further the extremely harmful idea that abortion is a violent procedure and safe self-managed abortion is not possible. In fact, RiseUp has not once raised awareness about medication abortion as a post-Roe tool, and its only aim is ‘saving Roe,’ despite this never having been enough historically,” the pro-abortion groups also alleged. 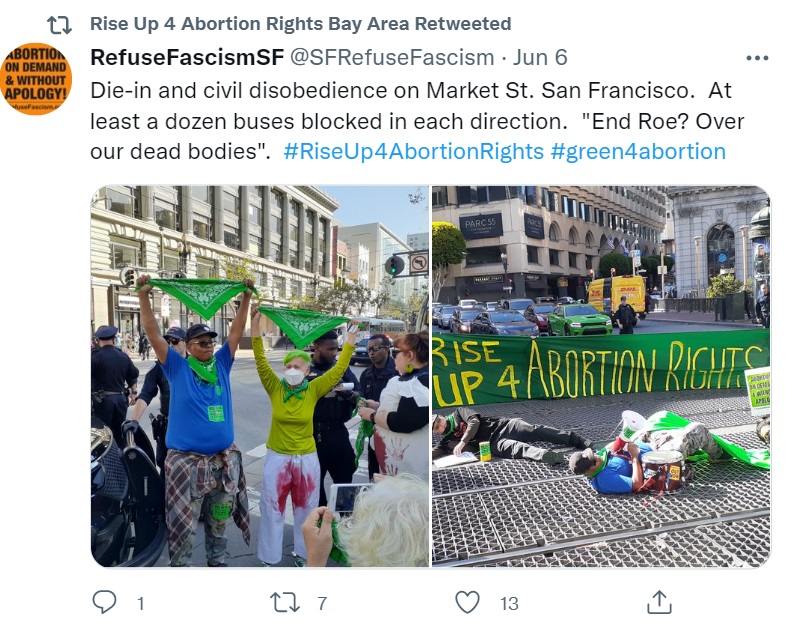 The disunity between the groups was evident in a post recently published by RevCom, which explained that a moderator on a popular pro-choice Reddit forum posted that they “do not recommend interacting with or supporting Rise Up 4 Abortion Rights.”

The RevCom post noted, “We revcoms (revolutionary communists and followers of the revolutionary leader Bob Avakian) do not hide the fact that we are working for an actual revolution to overthrow the whole system of capitalism-imperialism. And it is on this basis that we recognize the need to work in a coalition of people, uniting from many different perspectives and viewpoints to STOP a major fascist attack on women.”