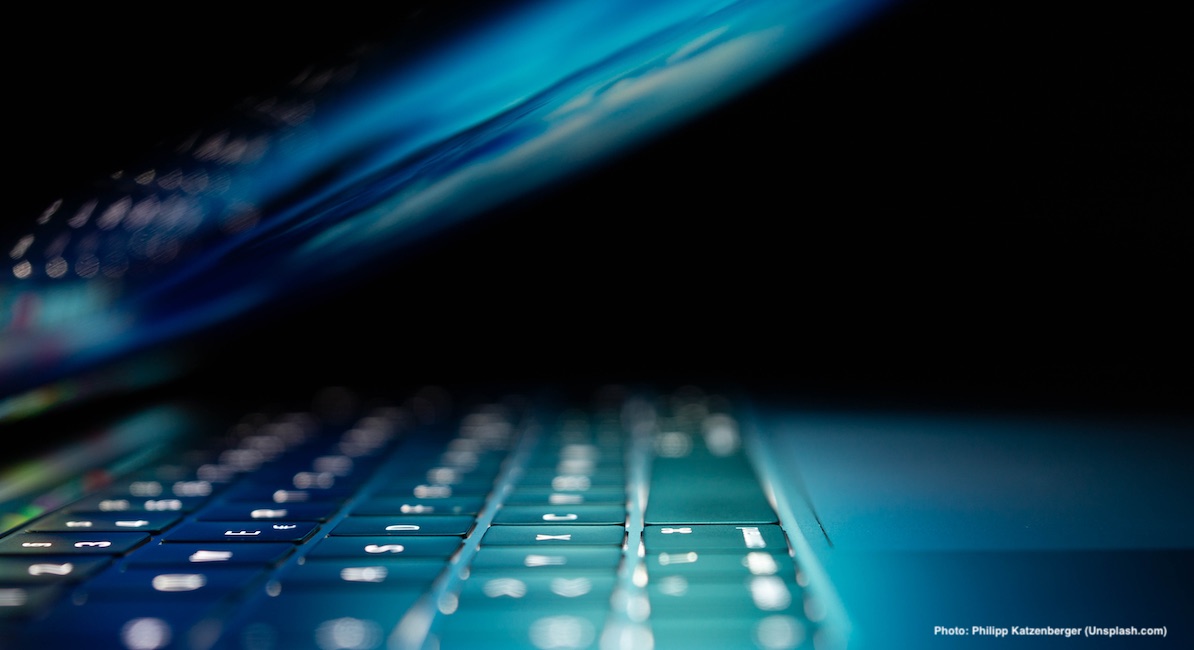 When it comes to Big Tech, a small number of companies dominate the internet and social media platforms. Among these online platforms, pro-life content — including news, images, and videos — have been repeatedly and increasingly suppressed. The White House hosted a social media summit on this issue in 2019. Here are seven examples of what Big Tech has done — and is still currently doing — to suppress Live Action’s pro-life message.

Twitter’s bias against the pro-life movement has become more evident over the years, and the tech giant’s censorship of Live Action has lasted for at least four years. In 2017, the organization released e-mail exchanges with Twitter, which revealed that the social media platform refused to allow Live Action or president Lila Rose to advertise unless the Twitter accounts as well as Live Action’s website were scrubbed of pro-life content and news of Live Action’s own investigations.

According to Twitter, the pro-life information shared was deemed to be “[t]hreatening, violent, gruesome, abusive, shocking, disturbing, offensive, obscene, vulgar, inflammatory, or provocative” content, and therefore, advertisements from Live Action and Lila Rose have been banned. Meanwhile, pro-abortion groups like Planned Parenthood continue to advertise freely.

In June 2019, Rose was told that she could run advertisements again, only for Twitter to rapidly reverse course. Once Rose began enrolling, Twitter sent a message saying the approval was an error. 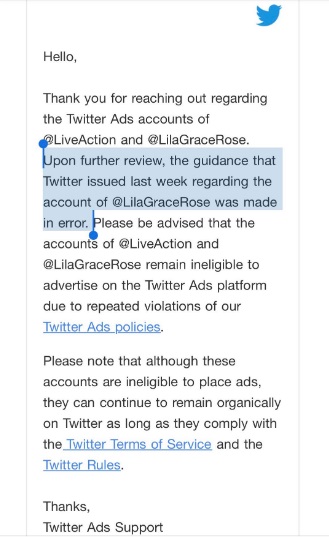 While Twitter refuses to allow Live Action to advertise, Planned Parenthood has been able to purchase over $120,000 in ads, and Planned Parenthood Action, the abortion corporation’s political arm, spent over $110,000 in promoted tweets, as reported in July 2019. Pro-abortion groups like Reproaction and Emily’s List likewise are freely able to advertise — demonstrating that for Twitter, the issue isn’t one of avoiding divisive content, but merely of suppressing pro-life content.

More surprising is Facebook’s decision to hide Live Action content, even when it does not depict graphic pictures or videos of abortion. A picture of a preborn child was hidden, for example: 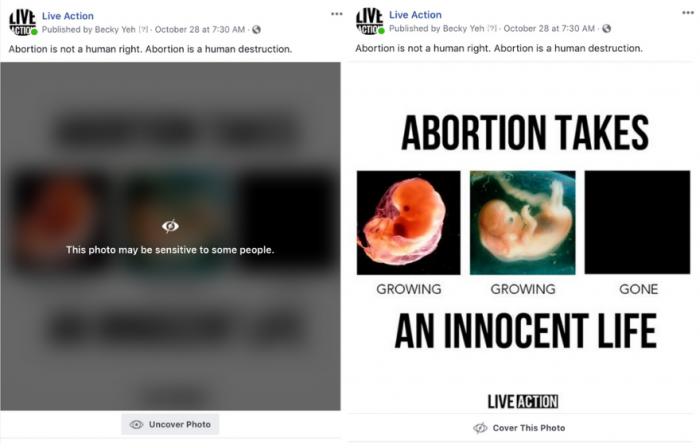 Facebook and Instagram will not allow Live Action to run ads using images of premature babies, and the sister sites filter organic posts of preemies, blurring them out due to “sensitive content.” 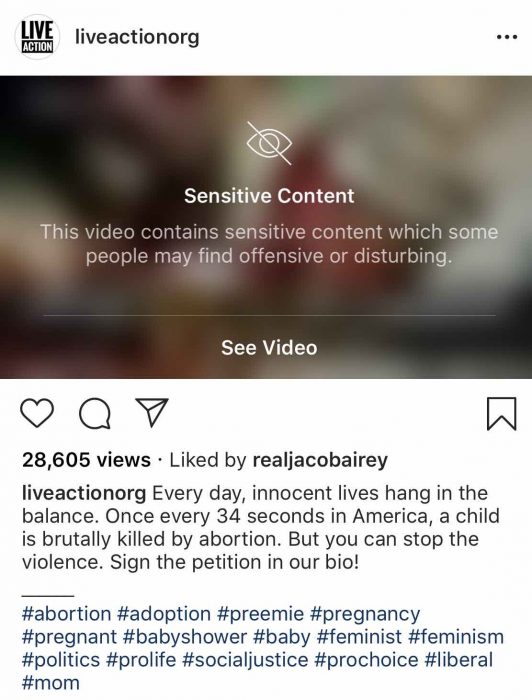 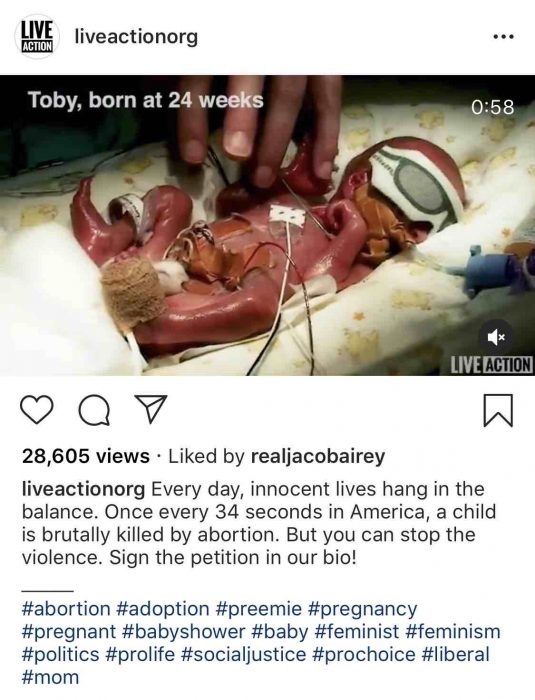 Other Live Action memes — even when posted by others — have been removed and censored as “hate speech.” 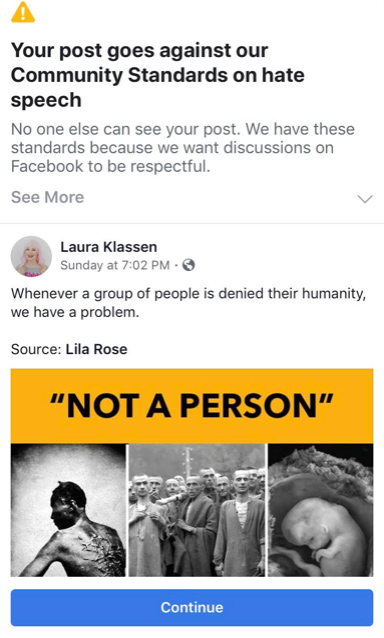 Video advertisements from Live Action detailing Planned Parenthood’s cover up of child sexual abuse were held by Facebook indefinitely for “review,” but in the same display of hypocrisy as Twitter, Planned Parenthood itself was free to run ads.

In addition, around the previous election, Facebook flagged the image of a premature 22-week old baby on life support with the words “Pledge Pro-Life” as “nudity” and “violent content.” The ad was not released when requested, but instead was kept from running until very late on election day.

This censorship came to light after Pinterest employee Eric Cochran became an anonymous whistleblower for Project Veritas, and Pinterest then fired Cochran.

After this information came to light, Pinterest claimed the decision to block Live Action was made not because of pornographic content, but because Pinterest does not allow “misinformation” and claimed the organization’s account “may have immediate and detrimental effects on a Pinner’s health or on public safety.” This was reportedly due to “conspiracy theories and anti-vaccine advice,” though Live Action is neutral on the subject of vaccines.

The accusations of conspiracy theories are believed to be due to Live Action’s reporting on the Center for Medical Progress’s (CMP) undercover investigations into the trafficking of fetal body parts by Planned Parenthood and fetal procurement agencies. Though CMP’s full, unedited videos are all available online and forensic analysis has found them to be authentic and not doctored or manipulated, pro-abortion groups continue to insist that the investigations are nothing more than a conspiracy theory.

Though Live Action’s videos, along with those of many other pro-life groups, are largely available on YouTube, the video-sharing website has suppressed pro-life content for years. As far back as a decade ago, YouTube was blocking Live Action videos, claiming that four of them included “inappropriate content,” though there were no specific examples given nor advance notice. The videos had been on YouTube for over seven months before suddenly being removed without warning.

YouTube also caved to a pro-abortion writer for Slate, who complained that a search for “abortion” led her to Live Action’s videos. The writer, April Glaser, said that she e-mailed YouTube, complaining about seeing pro-life search results — and the tech giant altered its algorithms so that some of the most popular pro-life videos — Live Action’s popular “Abortion Procedures” videos included — were severely downgraded, essentially burying the videos so they would be more difficult for someone to find while browsing the site for abortion information. The videos, as can be seen below, are medically accurate animations and are non-graphic.

Earlier in 2019, a years-old Live Action video was also temporarily removed. The video, which exposed Planned Parenthood’s cover up of child sex trafficking, was claimed by YouTube to have violated their terms of service regarding “nudity or sexual content.” After various appeals, the video was finally restored.

“Approving” ads but never allowing them to run

As an experiment, Live Action attempted to increase cost-per-view bids to extremely high amounts to see if perhaps increasing the bid would make a difference in running the ads. It didn’t. After multiple support calls with Google Support, customer service representatives have no explanation. At times, the reps have even claimed that the videos are simply “unavailable” or have been removed from Live Action’s channel, when they are, in fact, on the channel and active.

All these instances taken together do far more than merely hint at YouTube’s suppression of Live Action’s pro-life message.

After creating an account on the video-sharing service, Live Action quickly became the largest abortion-related organization on TikTok. Yet in January of 2020, Live Action’s account was suddenly, and without warning, completely removed due to unnamed “community violations.”

The first video removed, seen below, is not graphic and does not contain any profanity, nudity, or violent content.

Shortly after that video was removed, Live Action’s entire account was taken down. TikTok later reinstated Live Action’s account, and claimed its removal was due to “human error.” 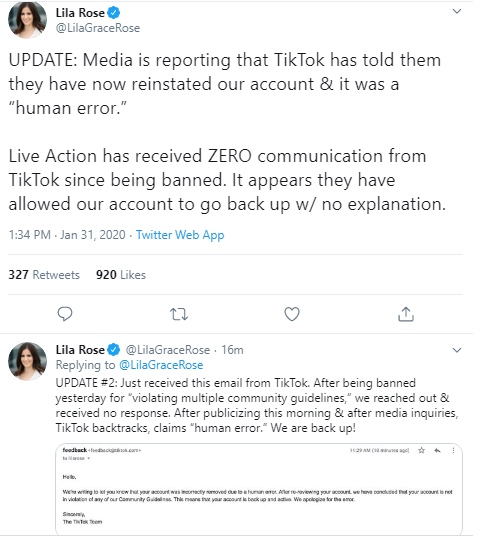 Despite such censorship, Live Action continues to work to spread the pro-life message, with the largest collective following on social media. Though abortion organizations and their allies work to keep pro-life information from reaching people, the truth will always get out.

Editor’s Note: This post has been updated since its original publication on July 11, 2019.