According to documentation provided by an insider at Pinterest, the social media company has actively chosen to block the content of Live Action, which has the largest online following in the pro-life movement, with over 3.3 million followers. The video an undercover investigation conducted by Project Veritas, a watchdog group founded and run by James O’Keefe, shown below, features an anonymous whistleblower who is an employee of Pinterest, claiming to have discovered inside communications confirming that a top official at Pinterest intentionally added LiveAction.org to the blocked list of pornography websites in February of 2019. [Editor’s Note, 6/15/19: That whistleblower, who was later fired, has since been identified as Eric Cochran, and you may donate to a GoFundMe set up on his behalf here.]What this means is that when Pinterest users attempted to create pins linking to any content from LiveAction.org, they were prevented from doing so. As shown in the video below, Project Veritas team members ran a test and were unable to create pins with links to LiveAction.org.

Live Action employees put the claim to the test and found that they, too, were unable to create a pin linking to LiveAction.org. Employees were, however, able to create pins using domains of other pro-life groups, as well as pro-abortion sites like Planned Parenthood. As of Sunday evening, Pinterest was not allowing users to create pins that link to Live Action’s website. Only on Monday, after Project Veritas reached out to Pinterest letting them know of the whistleblower’s claims and asking for comment, were pins able to link to LiveAction.org.

Then, as of Tuesday morning around 4:39 a.m. EST, Pinterest suddenly and inexplicably permanently suspended Live Action’s account, saying the account “may have immediate and detrimental effects on a Pinner’s health or on public safety.”

Right now, there are more questions than answers about Pinterest’s treatment of pro-life messages. 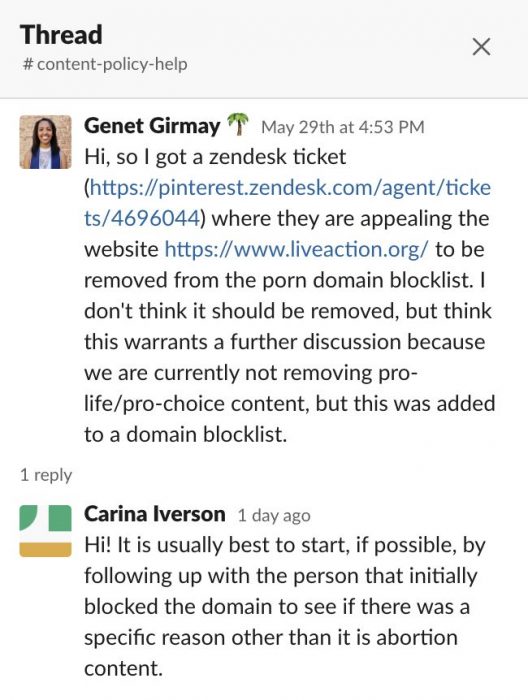 As no other pro-life group seemed to be affected, it appears that Live Action was a select target of the California-based social media company, which has approximately 300 million monthly users. A recent report from  Media Matters may explain why: “Posts from Live Action and the organization’s founder, Lila Rose, together accounted for a larger share of top Facebook posts related to abortion than all left-leaning pages combined.”

Live Action president and founder Lila Rose reacted to the bombshell, stating in a press release:

Based on the evidence provided, it appears that Pinterest intentionally added ‘LiveAction.org’ to a ‘pornography’ blocklist in an effort to suppress our pro-life content from being shared on the platform.

By secretly applying the label of ‘pornography’ to Live Action’s pro-life content, Pinterest demonstrates a concerted effort to sideline a leading pro-life organization the only way they knew how. This does not appear to be a simple mistake. When confronted with an appeal, their employees doubled down and kept LiveAction.org on the pornography list.

What exactly is Pinterest attempting to block? Inspirational messages to pregnant mothers, ultrasound images showing the science of prenatal development, medically accurate information on the abortion procedure, and images saying women deserve better than abortion industry leader Planned Parenthood. Pinterest has targeted Live Action, I believe because our message is so effective at educating millions about the humanity of the preborn child and the injustice of abortion. Pinterest says that their mission is to “help empower people to discover things that they love,” but despite the fact that millions of people love babies and the pro-life cause, they are secretly censoring our life-affirming messages. Pinterest users deserve to know the truth and our messages deserve to be treated fairly. If Planned Parenthood can promote their message on Pinterest, then Live Action should be able to as well.

Censorship of Live Action’s content by Big Tech is, unfortunately, nothing new. Twitter has censored Live Action for years, disallowing Live Action or Lila Rose from running ads on the platform unless first agreeing to delete from its own website its undercover investigations, investigations by the Center for Medical Progress, images and videos of abortion procedures, content related to defunding Planned Parenthood, ultrasounds and images of preborn children, and more. Planned Parenthood and other pro-abortion groups, however, are allowed to purchase hundreds of thousands of dollars worth of ads on Twitter.

READ: Twitter says yes, then says no to ads from Live Action and Lila Rose

In yet another example of censorship, YouTube buried Live Action’s extremely popular “Abortion Procedures” videos — which show medical animations of abortion procedures and have been viewed more than 140 million times — after a Slate reporter complained about seeing too many pro-life videos when searching “abortion” on the video sharing site. Daily Wire editor Ben Shapiro’s widely-viewed videos on the subject of abortion were also buried, within three days of YouTube receiving the complaint.

The whistleblower who spoke to Project Veritas also notes that Pinterest “hide[s] content” from what it considers to be “conspiracies” which Pinterest believes cause “active harm” to users. Among these so-called “conspiracies” is the Center for Medical Progress‘s undercover work exposing Planned Parenthood’s involvement in harvesting the body parts of aborted children, exposed by David Daleiden and Sandra Merritt, who are currently still involved in court battles presided over by Planned Parenthood-involved judges after being charged with felonies by Planned Parenthood’s political allies.

Update, 6/11/19: The whistleblower was reportedly escorted from Pinterest’s headquarters early this afternoon around 1:30p EST.