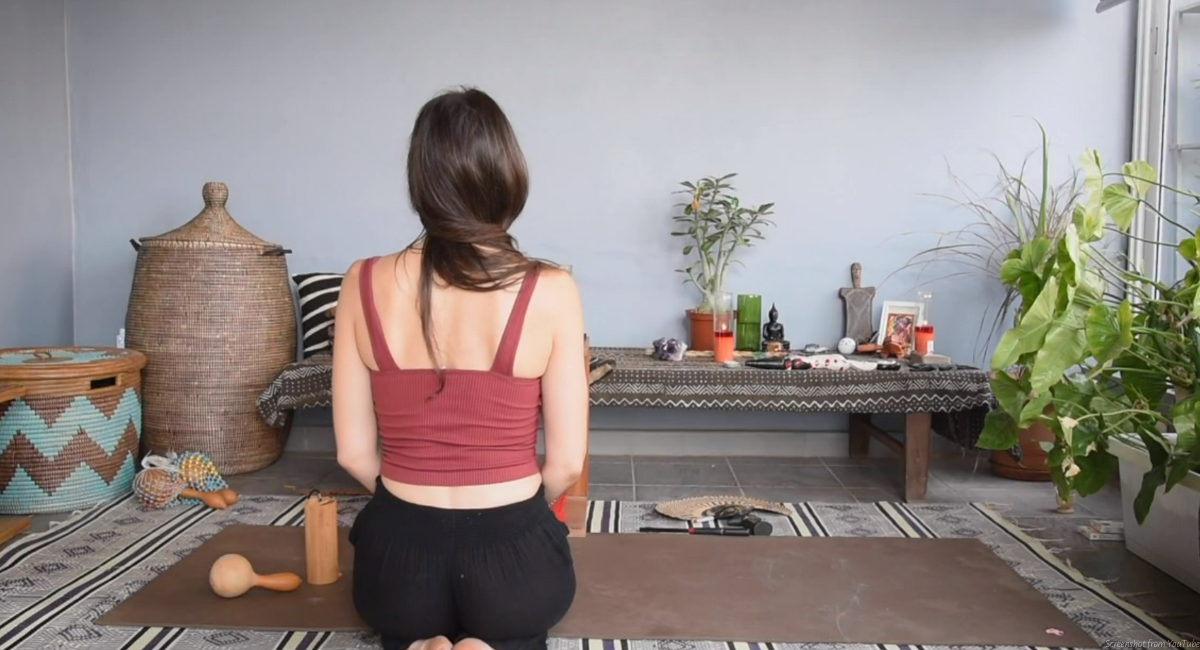 On August 4th, Drew Hernandez, an investigative reporter and commentator with FRONTLINES and Turning Point USA, unearthed and posted to Twitter a video by the group Self-Guided Abortion, run by a self-described “abortion doula,” and which boldly proclaims on its website that “Abortion Is Sacred.” The video has since been made private on YouTube, but can still be viewed here, and contains instructions on “how to build an altar for your mifepristone + misoprostol abortion.”

An altar is “an elevated place or structure … on which sacrifices are offered to gods, ancestors, etc.” And, shockingly, the woman in Self-Guided Abortion’s how-to video suggests collecting the “fetal remains” after the abortion has been completed in order to place them under the altar.

Perhaps she is ignorant of history, but her suggestion parallels horrific practices in human history which we would be better off not imitating.

Civilizations have been sacrificing their children since time immemorial

Many peoples throughout history have built altars upon which they placed the corpses of their children.

The Bible references the pagan god Moloch as one to whom child sacrifices were routinely made by cultures surrounding the Israelites, and even at times by the Israelites themselves — in spite of the fact that God had commanded them not to do so.

The ancient Carthaginians sacrificed newborns at locations called tophets. Some experts speculate these sacrifices were used for population control and that rich Carthaginians used them as a means of preserving their wealth.

Franciscan friar and missionary Bernardino de Sahagún reports that the Aztec god Tlaloc required the earth to be wet by the tears of sacrificed children before he would bring rain. Consequently, if the children did not cry, priests would tear off their fingernails before killing them.

Researcher Andrew K. Scherer reports that the Maya performed infant sacrifices to appease supernatural beings who might otherwise have eaten the souls of more important people.

In Peru, the Chimú people sacrificed children “to appease the El Niño [weather] phenomenon,” according to archaeologist Feren Castillo. The later Inca culture sacrificed child victims during wars and natural disasters, among other occasions.

Self-Guided Abortion’s video guide incorporates a litany of neo-pagan elements, including “smudging” (to “clean the space”), crystals (“to bring more energetic resonance to the altar”), and an Empress tarot card (“she … symbolizes feminine fertility … and the growing and manifestation of the new and creation”). Ironically, she also uses an image of Our Lady of Guadalupe, to whose appearance Catholics credit the Christian conversion of countless indigenous Americans away from the child-sacrificing Aztec religion.

The woman in the video also puts the abortion pills on the altar to “bless” them, and “to put [the] intention for healing into the pills” — even though abortion pills do the opposite of healing. They kill a child, and can cause medical complications for the mother.

Some, like the following, are similar to the one described in Self-Guided Abortion’s video in their neo-pagan overtones:

The image we held for [the baby] was of a lighthouse, flashing a loving message to him … letting him know … that he was not going to be able to land here. We told him the date for which abortion had been scheduled, and that if he wanted to turn around on his own, he could do so before then. Otherwise, his parents would go ahead with the procedure, bringing as much beauty and love to it as they could … We carried our prayer bundle outside to the fire pit, and built a hot, beautiful fire … We called out, by name, to the ancestors who would be waiting for [the baby] … We prayed that his voyage be blessed. And we laid the bundle on the fire. Then we turned and … listened while the offering was received by the hungry fire spirits. 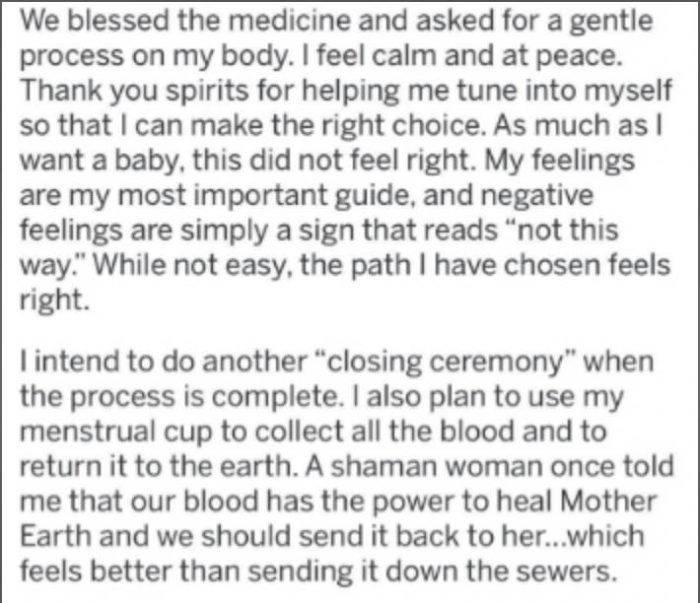 Some of the rituals incorporate pagan elements alongside those of other religions, like this quasi-Jewish ritual, which includes scripted prayers to the “Divine Presence,” and utilizes two bowls of water — one of which is meant to represent the mikveh, the Jewish ritual bath for purification. The perversion of the mikveh into an abortion ritual seems to be fairly common. Another Judeo-pagan “self-birthing” abortion ritual also involves a mikveh element, focuses on affirming one’s own “inner beauty and Divine sparks,” and “involves blessing of the newborn/renewed self.”

Appendix B of the Pregnancy Options “Abortion Resolution Workbook” has compiled abortion rituals for and from virtually every faith tradition, including a Native American ritual, a Buddhist ritual, a pagan ritual, and a ritual “based on Christian and … African-American [c]ultural [t]raditions” involving ancestor worship. They also have one for Hispanic Catholic women which centers on prayer to the Virgin Mary.

Second verse, same as the first

Commenting on the modern revulsion to ancient child sacrifice, professor of Ancient History at Oxford University, Dr. Josephine Quinn, stated: “We like to think that we’re quite close to the ancient world, that they were really just like us — the truth is, I’m afraid, that they really weren’t.”

But clearly, Dr. Quinn is wrong.

We’re still sacrificing our children in ritual fashion, at times using altars. We’re even doing so for more or less the same reasons. Like the Carthaginians, we’re motivated by population control and the preservation of economic resources. Like the Maya, we kill our children because we consider ourselves–and our personal goals–more important than they are. And like the Aztecs and Chimú, some people even think abortion is necessary to combat climate issues.

The only things that have changed are the specific killing methods and the gods being worshiped. Today, the gods in whose names these sacrifices are committed are usually money, achievement, and “success.” The victim’s own mother even deifies herself by claiming authority over life and death in the name of achieving her own ends.

If we feel revulsion at the thought of ancient child sacrifice, we should feel equally disgusted by the modern abortion epidemic and all of the pseudo-religious justifications and rituals that accompany it.