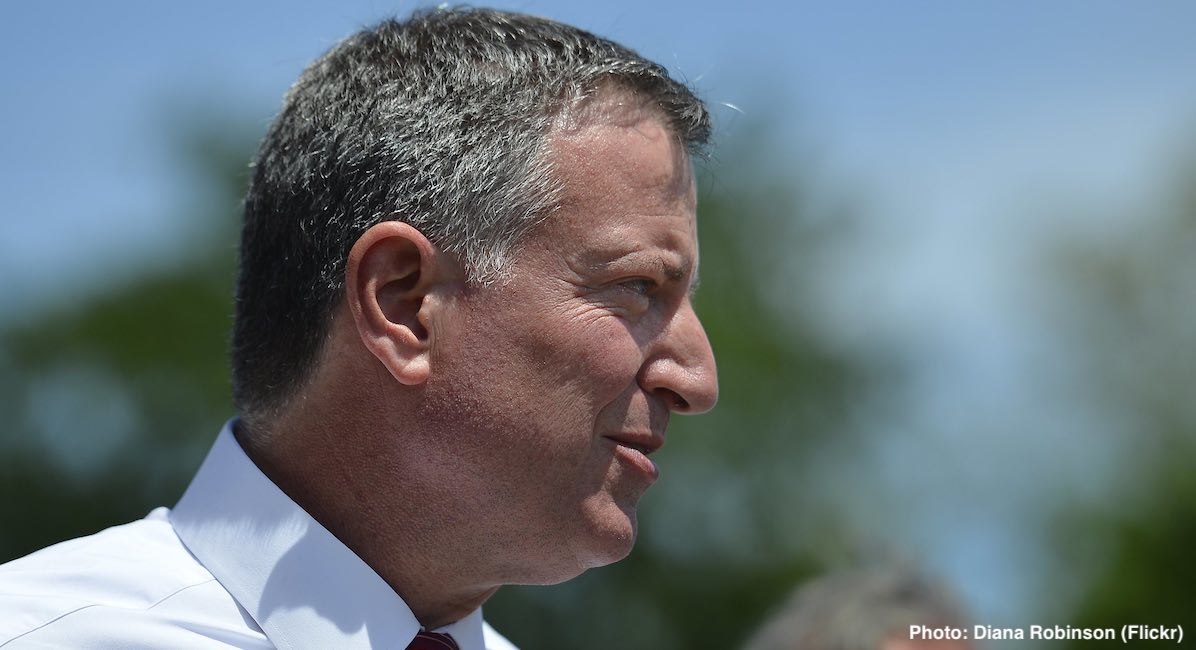 New York Mayor Bill de Blasio is, like every other Democratic presidential hopeful, a die-hard abortion supporter. But are there any limits on abortion that he would support? De Blasio sat down with Fox News host Sean Hannity to discuss various political positions, with the interview making its way towards abortion. Instead of focusing on the legality of abortion overall, however, Hannity quizzed deBlasio to see just how far his abortion support goes.

“Do you support any restrictions on abortion?” Hannity asked, and de Blasio seemed to avoid the question.

“I believe in Roe v. Wade; I believe the decision is between a woman and her doctor,” he said.

But Hannity pressed on, using the controversial Virginia bill which allowed for abortions up to birth as an example, and then repeated, “Do you support any restrictions on abortion?”

In response, de Blasio merely repeated that he believes in Roe v. Wade, and in leaving the decision between a woman and her doctor. “What you’re going to do, and I respect that this is your job, and I have a job too,” de Blasio began. “Your job is to try and sometimes make this a cartoon, while I try to tell you this is about a woman’s right to choose, which is under attack.”

“I live in New York!” Hannity exclaimed. “I have many friends who are Democrats and who are pro-choice. But, for example, do you think a woman in the ninth month, putting aside health, putting aside life of the mother, do you support any restrictions until the baby’s born? That’s a simple question!”

“No, I believe it’s a smokescreen,” de Blasio responded. “Because it doesn’t happen in America. Women make this choice. It’s a sacred choice for women.”

Hannity pointed out that there are 10 states that allow abortion throughout the entirety of a woman’s pregnancy, and de Blasio replied, “Here’s the problem with this whole discussion. The problem is, women make this choice. It’s a very difficult choice. It’s a very personal choice. And what we need to respect is, it’s not a choice any woman wants to make. And the law — overwhelmingly, Americans believe in protecting the right to choose.”

Throughout the entire interview, while de Blasio refused to verbally affirm late-term abortions, he also refused to disavow them, merely repeating over and over that he supports a woman’s right to choose.

It’s not uncommon for abortion supporters like de Blasio to deny that late-term abortions exist. They do, of course; according to the CDC’s Abortion Surveillance Report, 1.3% of all abortions committed were after 21 weeks of pregnancy, equaling over 8,000 abortions. But the true number is almost certainly higher, considering that not every state reports abortion data to the CDC. The pro-abortion Guttmacher Institute has estimated that it is much higher, possibly as many as 12,000 each year. And while it is true that most Americans want abortion to remain legal, what de Blasio does not acknowledge is that only 12 percent of Americans support abortion being completely legal, with no restrictions, taxpayer funded, available at any time and for any reason — the Democratic party’s position. Polling consistently shows that most Americans support heavy restrictions, limiting abortion to just the first trimester, and also support things like waiting periods, informed consent laws, and parental consent requirements.

Unfortunately, de Blasio is not alone in his extremism. Every single Democratic presidential candidate has similar beliefs, and other Democrats — like Nancy Pelosi — have also referred to abortion as being “sacred.” What these abortion advocates don’t seem to care about is the fact that they are completely and utterly out of touch with the American people.

Princeton bioethics professor Robert P. George reacted to de Blasio’s statements in a post on Facebook, writing, “This is where the progressive movement and the Democratic Party are today. The days of ‘abortion must be permitted as a tragic necessity early in pregnancy and gestation but not late,’ and ‘abortion should be safe, legal, and rare,’ are over. If one wants to be a national figure in the Democratic Party, it must be ‘abortion for all nine months and for any reason–paid for by all American taxpayers.’ In progressive and Democratic theology, abortion, you see, is ‘a sacred choice.'”