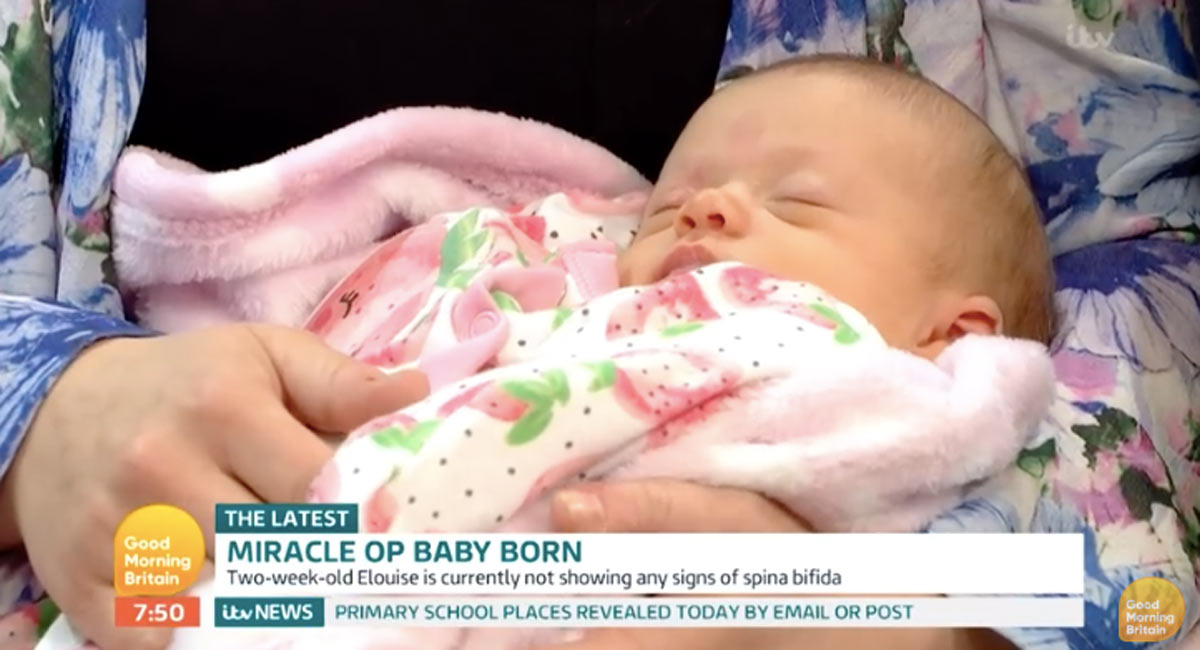 When doctors told 26-year-old mental health nurse Bethan Simpson after her 20-week ultrasound that her daughter Eloise had spina bifida — a condition in which the area around the developing spinal cord fails to properly close — they recommended abortion. But Simpson refused. “I couldn’t justify terminating a child I could feel kicking,” she said. Bethan and husband Kieron opted for prenatal surgery instead, which they called a “no-brainer.” The surgery has only been recently introduced to the United Kingdom, and has been done successfully there a handful of times. The BBC reports that Simpson is thought to be the fourth mother to undergo the surgery in the UK. The surgery has been done many times successfully in the United States and in Belgium.

According to the Children’s Hospital of Philadelphia, the hours-long surgery is typically done between 19 and 25 weeks, and will likely require the mother to remain on bedrest after the surgery for as long as possible. If labor does not begin early, CHOP states that mothers will deliver by planned C-section at 37 weeks.

The Simpsons reportedly conceived Elouise through IVF, and were alarmed when they learned at their prenatal scan that she had spina bifida. As is sadly typical when a fetal anomaly is found during pregnancy, abortion was recommended. Bethan told  the Daily Mail that doctors “did say it would be a pretty bleak outcome… very bleak. It was such a raw time.” Her husband Kieron added, “It was a pretty stark choice. How could we bring a child into this world with such a poor quality of life? She may not have had the use of her lower limbs as well as dysfunctional bladder and kidneys.”

But after going to another hospital and learning of the surgical option, the Simpsons were determined to help their child — not to terminate her for having physical challenges. At 25 weeks, Bethan had the surgery, done by a team of 20 doctors — and because of the choice to try to give Elouise a chance at life, she is doing amazingly well today. She reportedly shows no signs of spina bifida. When she was born on April 1, 2019, she “came out literally kicking and screaming – and peeing all over the place – so she ticked all the boxes,” her mother told the BBC.

“She has slightly enlarged ventricles, which she always did have, but her kidneys, bladder and hips are all normal and she has sensation right down to her toes…. She’s living proof of what this surgery can do. It might not work for everyone but we’ve been incredibly lucky,” her mother told the BBC. “Her baseline is so good the doctor hopes the effects of spina bifida will be minimal. We hope she will learn to walk and talk like a normal baby.”

Elouise’s surgery success story is inspiring, and every parent naturally wants their child to be healthy. In fact, her story has encouraged other parents expecting children with spina bifida to choose life and seek prenatal surgery for their babies.

However, it is more than unfortunate that the UK’s Daily Mail chose to frame the success of the surgery as protecting Elouise from a “threatened… lifetime of disability” — as if somehow, disability makes life less worth living, or lessens the value of a person’s life. Elouise’s life is valuable, and her life is worth living, even if she were never to walk or talk, or do things that children without spina bifida can do. Many people live incredibly full lives with disabilities, and they don’t want to be treated as if their lives aren’t worth living.