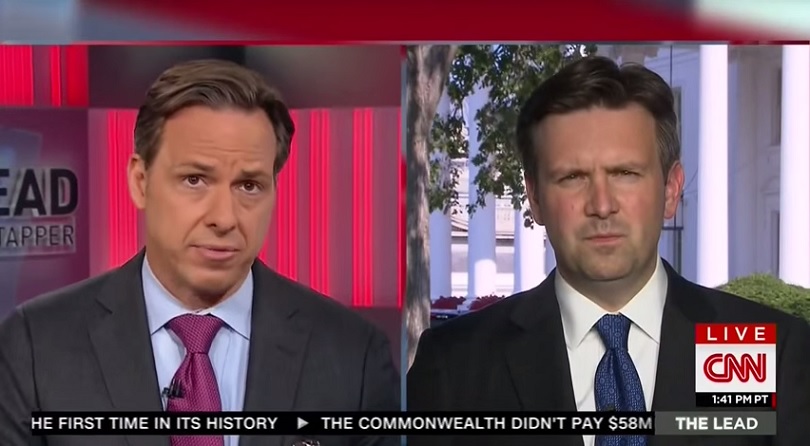 The country is outraged about the undercover videos showing Planned Parenthood executives haggling over the body parts of preborn babies, some of whom even gleefully exclaiming over the remains as they point out details about babies that had just been killed.

While more and more states are opening investigations and even defunding Planned Parenthood, as these videos show the abortion giant engaging in illegal behavior, the White House is apparently not all that concerned about it; President Obama couldn’t even be bothered to watch the videos.

While many in the mainstream media are taking their orders from Planned Parenthood in how to report on this scandal, at least one journalist is doing the right thing and speaking out. Jake Tapper, an anchor at CNN, is not only reporting on the videos, but he’s also calling out the Obama administration, strongly suggesting that the administration might need to watch the videos.

Yesterday, CNN anchor Jack Tapper asked Earnest, “There’s nothing in these tapes that bothers you or anyone in the White House?” Of course, Earnest didn’t answer the question and simply reiterated that the videos were “highly edited” and not credible because the group that published them has an agenda to “distort the position and the policies of Planned Parenthood.” He also said for the second time that he has not actually watched the videos.

Tapper responded, “The whole video is put up on the website of this anti-abortion group that put them out. You don’t have to watch just the edited version. You can watch the whole version.” To which Earnest replied: “I’m relying on news reports that I’ve seen on people who’ve taken a look at this and raised questions about the videos themselves and there’s no doubt that this is an organization that has targeted Planned Parenthood for some time so they clearly have an ideological ax to grind.”

Then Earnest goes on to say that Planned Parenthood provides regular health care for millions of Americans and does not use federal funds to perform abortions. However, Tapper didn’t buy his response and gave Earnest a great suggestion. He said, “Well, somebody at the White House should maybe watch the videos in full.”

Of course, Obama is the most pro-abortion president in this country’s history, and has responded to evidence of lawlessness at Planned Parenthood by thanking them for all they do… you know, like ripping babies apart piece by piece and then selling off their body parts, in addition to their numerous other horrific law-breaking activities. If Obama doesn’t mind that Planned Parenthood is willing to cover up the sexual abuse and human trafficking of children, then why should he care if they’re getting some extra money from selling the body parts of preborn children killed in their abortion mills?